Just got my copy of this new manifesto from Ch Cheval Blanc. 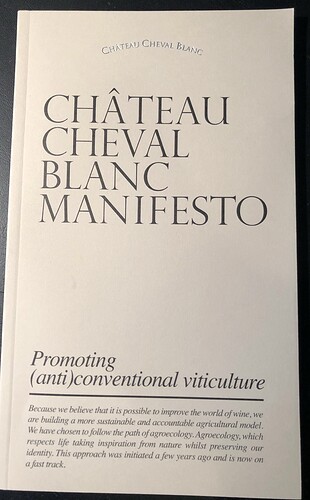 Initial reaction was cynical, however having read a bit further I’m all in favour. Humanism for farms maybe.

I don’t know if this is available online anywhere but I have a few spare copies if anyone would like one posting out. Please message me if so.

Thanks for the offer Simon. I’d take one, but only out of sheer curiosity so if there’s anyone out there who needs it for study / professional reasons they should be given priority.

Congratulations on your new role by the way.

Ironically it seems to be available only in dead-tree format.

Nothing wrong with the printed word!

It depends… on lots of things actually

Yes, agreed, but I do find it irritating (with others, not yourself) when people make incorrect links between paper usage and saving rainforests, as recently experienced with a message sent from my dentist saying they would be sending appointment reminders by email, not letter as a green initiative.

I’m reminded of a hawker on London Bridge, some years ago, who was selling cheap plastic lighters with the slogan “save the rainforest, don’t use matches.”

The road to climate disaster is paved with expensive marketing blurb?

I would remove “expensive”, “blurb”, and the question mark from that sentence.

The point of much marketing (not all, admittedly) seems to be get us to aquire stuff we didn’t think we needed, at a time we should be seriously asking ourselves how important all new aquisitions are to us. I see it not so much as hair-shirt austerity, as re-evaluating priorities.

To bring my comment back on topic, that document is clearly marketing. If it were a serious attempt to communicate an effort to protect the environment, it would be made available in a form that was much more widely accessible. From what I have seen (necessarily very little) the form of publishing is primarily part of maintaining the Château’s image as a luxury brand.

I feel that Chateau Cheval Blanc are trying to differentiate themselves (hopefully in a good way) between the rest of the St Emilionais, especially the classified lot, as they have recently removed themselves from the recurring furore associated with each ten-year kerfuffle!
They can afford to produce this sort of stuff. Let’s see how they get on putting it into practice. Perhaps Greta will become a non-executive director!

I have now had the time to read through this document several times and mull over the issues and actions that they have committed to.

I’m amazed to read that within my own ‘wine lifetime’ the style of viticulture will change dramatically. For instance, when I first began visiting the Bordeaux region (usually sleeping in my car over nights) in 1982, vineyards were immaculately ploughed between each row of vines that themselves were perfectly trimmed to look like corduroy. Indeed, those that were not as well tended drew scorn as being badly managed.

Now it appears that vineyards will not be ploughed (which was deemed to aerate the soil) and will instead sport plants that will be allowed to grow 1metre high out of the growing season and will then be flattened in order to rot and feed the soil.

Perhaps the most difficult change to get my head around is the planting of trees for shade, especially as the planet is beginning to overheat (evidently). It doesn’t seem too long ago that mid-season de-leafing was the norm in order to help the grapes to ripen.
Is it me?

Perhaps the most telling thing about all these naturally expensive investments in the future of Cheval Blanc and environmentally friendly developments is a small paragraph that basically says they have no answer to mildew and will therefore continue using treatments (albeit sparingly) to control it, there being no mildew-chewing insects to set on the case.

I often prefix my comments to Mrs S with the statement “if I live long enough, I’ll see everything” etc etc. I thought I might have had to wait longer.