My Father in Law has just stated that La Flora Blanche - a Sauternes - was a favourite wine.

It doesn’t appear to be available any more (from the conversation, I’m guessing he was drinking in the 60’s/70’s).

Are you/is he confusing it with La Tour Blanche which is a good Sauternes. Folle Blanche is a grape variety which sounds similar to?

My parents also drank La Flora Blanche, it was definitely a thing. We are about to leave the Blayais area. There is a huge coop with various outlets dotted around called Tuttiac. We are enjoying a bottle of their Tuttiac Sauternes 2018 which is probably something similar. If you find yourself in this neck of the woods it would might fit the bill? 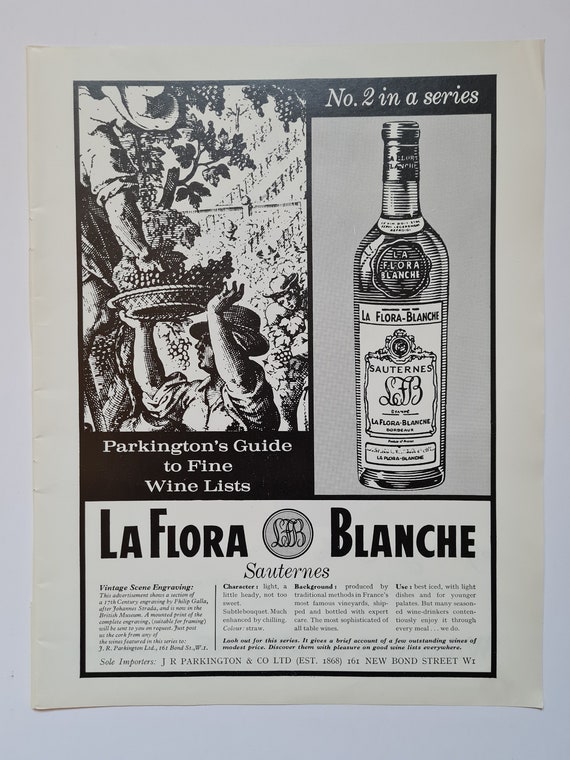 This Advertisements item is sold by BygoneMedia. Ships from United Kingdom. Listed on Sep 2, 2022

This advert for it describes it as light and not too sweet. Tends not to be a style in Sauternes these days where they are very lush. Maybe try Raymond Lafon? (Partly as it’s a personal favourite). Second wines of big names tend to be lighter and dry wines aged in Sauternes barrels might be worth a try.

It is also very hard to go wrong with the Cazzabonne Sauternes when it’s in stock!

It appears that some lots of La Flora Blanche have been put up for auction in recent years but I couldn’t tell the vintages of the bottles in question.

At least one bottle, in a fairly poor state, is in an auction starting tomorrow in Derby.
Bamfords

I’m guessing Flora Blanche was a shipper’s brand that vanished when J R Parkington stopped trading in 1996. I also doubt it was a real Sauternes. This was before UK joined EEC/EU and accepted wine laws so UK bottlers could call their wines anything.

The description of it being a light Table Wine that’s not too sweet doesn’t sound like what we know today of Sauternes.

My parents drank a Spanish Sauternes with dinner, so it couldn’t have been as sweet as real Sauternes.

Yes, it’s possible to buy ancient bottles of Flora Blanche at auction but they’ll be 40+ years old, and even if drinkable, will not be at all like the wine your FiL drank back then as he wasn’t drinking 40 yo wines.

If you do get a historic bottle of Flora Blanche I suggest also getting backups, first a half of Sauternes, cheap ones are available from supermarkets. Your FiL will probably find it too sweet so also get a medium sweet wine such as Cour-Cheverny Moelleux, Cuvée Renaissance, Le Petit Chambord, Cazin 2018 (thewinesociety.com) which will probably be closer to what he enjoyed then.

But not only wines have changed, so has his tastebuds. Who us now drink what we did 40-60 years ago? (Those not born then are exempt from this rhetorical question)

(Much later edit - of course as UK joined the then EEC in 1972 the company folded after - not before - however I suspect that without being able to sell their bestselling brands, of which Flora Blanche was just one - they could not compete in the new market)

Thanks for this sage advice. I’m hopeful of finding a taste that triggers happy memories so this will be a great way to start. I’ve put in a minor bid on the

I’m delighted to say I prevailed in the auction and will be collecting imminently.