The many different interpretations are the problem.

Spice to mean spices, not chillies, i.e. fragrant not hot.

I suppose each family uses their own recipe, I’ve had some at peoples houses (didn’t take photos) but they were much the same, and then there are restaurant versions, including meat free ones using lentils. Meat is usually lamb, only time I’ve had one when the meat wasn’t lamb it was ostrich. 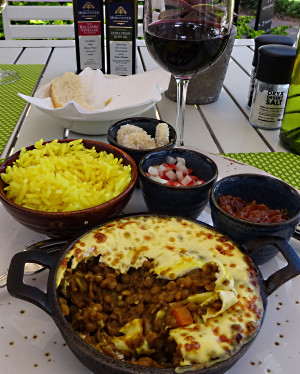 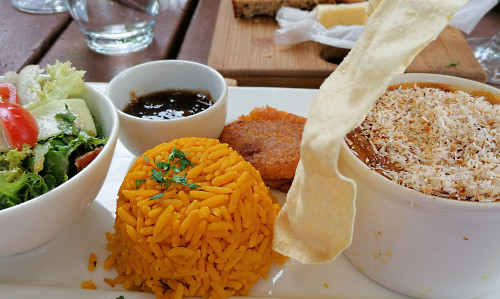 Thank you this is great info! In the absence of ostrich I suppose it’ll be lamb for me. I will report back once I’ve attempted it

The upper photo has the usual topping - the desiccated coconut is to be seen embedded on the banana slices, which we used to get at Delheim - perhaps they ran out of bananas that day.

“Sula” vineyards do a reasonable Sauvignon blanc, although I’d probably be reaching for the cobra personally!

I’ve had Sula; reasonable reds too; but I don’t know of an easily accessible source.

So we started last night, as planned, in England 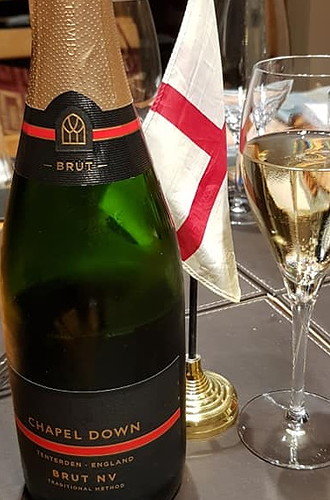 and with Ye Roaste Beef of Olde England 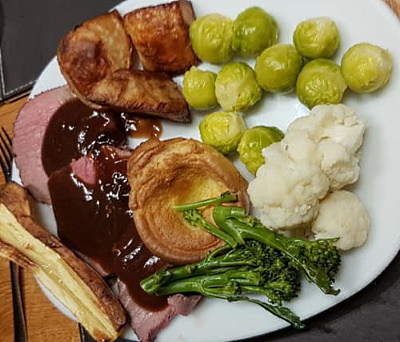 we had Ye Olde Claret

Last night we were in Country No. 2, South Africa, Western Cape Province.

Wine was the superb 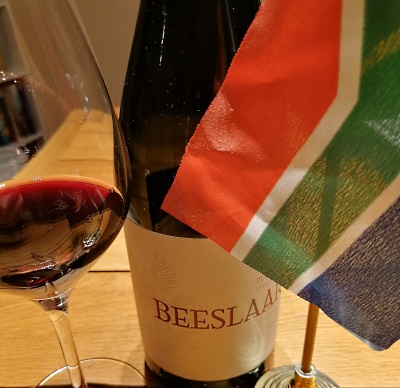 And the food was a Cape Malay curry of Butternut Squash, Chickpeas and Lentils 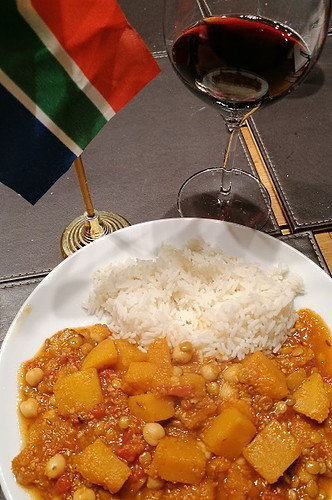 Just ladled onto the plate: no artful presentation in an individual potjie, no banana slices rolled in desiccated coconut and no Mrs Balls Chutney (!) so authenticity only went so far…

I was in Durban on business the first time I ever saw butternut. I got a small pot of boiled golden cubes to accompany the meal (can’t remember what that was) and I had to ask the waitron what the golden cubes were. Six months later butternut was stocked byWaitrose back home and its now a permanent feature. 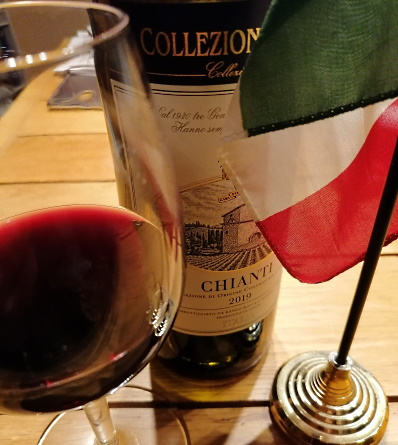 Chianti has fallen out of fashion, at least in our house, and I don’t know why. We used to drink a lot of (what I expect was cheap cash & carry ones) in Italian restaurants when we were younger.
This was delicious, 95% Sangiovese and so drinkable, as claret lovers this was like a ripe claret.

With it we had 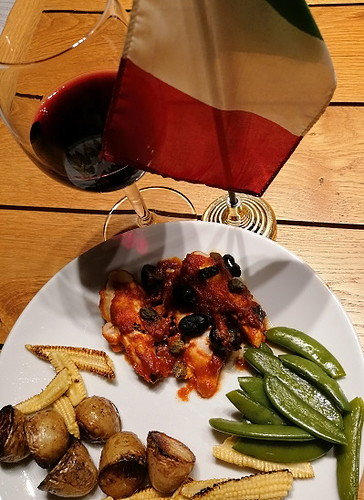 Pollo alla Pizzaiola.
This was a dish I frequently ordered in the small family run and award winning Italian restaurant in St Albans then one day I thought “I can make that at home”.
I put a layer of tomato sauce in a baking tray, lay the chicken breasts on top - these are breast strips - sprinkle with capers and halved stoned olives, cover with another layer of tomato sauce, then bake in fan oven for 30 mins at 180C.

Served with steamed sugar snap peas and olive oil sautéed halved new potatoes and baby sweetcorn (the sweetcorn and peas were ordered by mistake from Waitrose so I thought I’d better use them).

You’re certainly getting about more than most😀

Loving these, @peterm. Are you going to try matching the cuisine with the state when you get to the US wines? And what’s a Ukrainian dish? Some good research projects, right there.

And what’s a Ukrainian dish? Some good research projects, right there.

In 2019 we went to Ukraine for a Viking River cruise from Odessa to Kiev and – I think you are going to easily guess the Ukrainian dish the chef cooked the night we moored in Kiev!

So that’s Ukraine sorted!
But I intend to buy ready made. 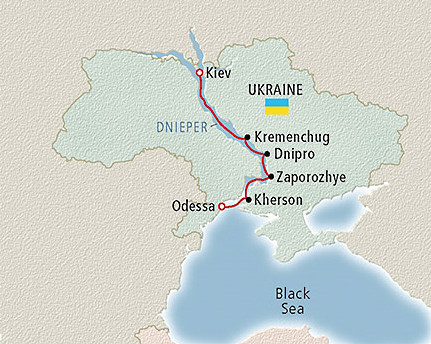 I doubt we are going to have a dish from each of the US states that I have wines from*. Mrs M mentioned having Southern Fried Chicken for the US, but I countered with Hamburger and Zinfandel.

Ahh… Bobotj, haven’t had that for maybe 20 years. There was a pub in Brill (near Thame, AKA ‘Bree’ of Tolkein fame) where the landlord had it on the menu - and nothing much else. Must make it this weekend.

Must make it this weekend.

Wonderbar!
Post a picture of it here and have a Cape wine accompanying it and then you’ve started your world wine and culinary tour!

As soon as you say that, it’s obvious, isn’t it! Very wise to buy ready made. I gave up trying to make Chicken Kiev - never managed to keep the butter inside. Hamburgers and zinfandel - great combination. But Southern Fried Chicken is good too (bit of a breaded chicken vibe going on)

never managed to keep the butter inside.

I’ve had some success, by firstly using the ‘mini-fillet’ as a sort of cork after the butter filling has gone in, and secondly by double coating it in egg / flour before the final breadcrumbs. And then only lightly saute before finishing undisturbed in the oven.

‘Some’ success - but very rarely the holy grail of green butter pooling out when you cut it open. Usually it ends up as a partial success, with a lot of garlic butter self-basting going on - which isn’t a bad place to be.

Cooked my Alsatian meal - details on the Weekend Drinking thread:

Complete lockdown indulgence here. While @peterm is busy setting out on a world tour on the It’s time to travel thread, I decided to cook the Alsatian meal that I suggested. I even ordered a cockerel from the butcher in order to do it properly, but it turned out more like a capon than a French coq. Still tasted good, though. Starter - tartelette à l’oignon, with Dirler-Cadé Vieilles Vignes Sylvaner 2016. [IMG_20210130_193441] Main - coq au riesling, spaetzles and cabbage, with Léon Beyer…

Which Leon Beyer? In 2016 I had the Pinot Gris, Comtes d’Eguisheim 2005 which deserved every superlative. However I presume you opened a Riesling?

IGNORE my comment - just noticed your link to the weekend thread! Cheers

Just watched the film. It was very good fun. We really enjoyed it. Many thanks for the recommendation. 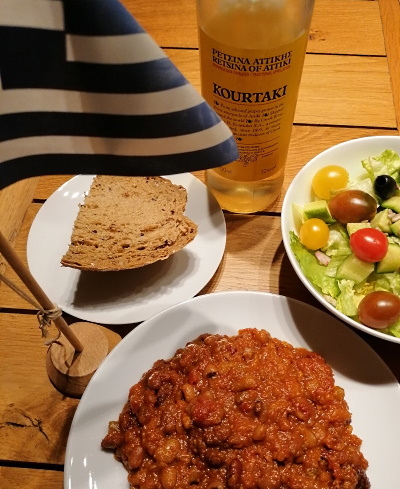