In person tastings ARE BACK

I attended the Pierre Mansour tasting last night. It was great fun, good to see in person tastings return.

The Cava was good on the nose, but lacking interest on tasting.

I thought the Society label was good at the price point, stoned fruit on the nose, medium body, very light oak and well received on our table. Pierre explained it was a modern style white rioja.

The Monopole was much more heavily oaked. I wrote “austere” in my notes, I didn’t get a lot of fruit but it was complex with a saline finish. I don’t think I’d buy it, but it was interesting. Pierre revealed that the wine is actually mixed with manzanilla sherry.

The Gravonia Blanco was a very distinctive deep amber colour, revealing its age. On the nose I expected something a bit sweet. On initial tasting I didn’t particularly like it, but it grew on me, the finish was very long and complex, nutty, hints of toffee. When I thought of it more like a sherry aperitif than a white wine, I could see myself buying it and enjoying it. But they’ve stopped making it!

I was excited to see the Gran Reserva Rosado on the line-up, having a bit of a cult status on the Community. I’m very glad I got this chance to try it, but I’ll just say I won’t be joining those seeking it out.

We tried 5&6 together. The Glorioso was a fruity modern style rioja, with lighter oak and a smoky flavour, very drinkable. I definitely preferred the more traditional style of the Exhibition label, made by Rioja Alta – everything I expect from a rioja. On a value basis, this was my bottle of the night.

Wines 7,8,9 were all great and it was difficult to pick a favourite, (7 was double decanted, 8&9 were served from bottle)

The Vina Real was showing beautifully, light, elegant with a floral fresher style.

The Contino was bigger, more powerful – clearly a more modern expression – I had myself marked as a traditional fan, but I could certainly find space for this in my collection.

A very enjoyable evening. This was my first WS formal tasting. I was a bit apprehensive attending solo, but the company was great and increasingly friendly as we worked through the lineup.

Thanks Rod, great write up. I’m trying to summon the energy to do the same for Sarah’s tasting that was earlier, but we went to Passione Vino for supper afterwards and it was a bit of a late one (plus now my memory is a little foggy!).

For now, all I can say is that it was bloody lovely getting out to a tasting again, the wine was fantastic and Sarah was an excellent host. 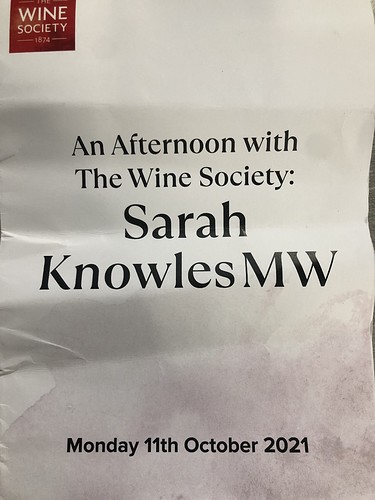 Just loving the crumpled, wine stained and ‘shoved-in-the-pocket’ look to your tasting notes! Very jealous, even without the write up.

Not my wine! Was part of the design.

So, I’m now collapsed on the sofa; the kids are in bed and quiet. MrsB is away tonight and their behaviour has been remarkably impeccable, much to my relief (the only tears would have been mine had they decided to behave otherwise).

Last night was great, great to be out with with the usual rascal @JamesE (maybe he has better notes than me) and also great to meet another member of the Community - @L2020 by sheer chance. We were on different tables, but chatted beforehand over the Society’s Champagne and caught up afterwards for a debrief.

1 Magnum of The Society’s Champagne Brut NV
Served on entry, sipped in the courtyard at the Merchant Taylors’ Hall. Delicious, really rich. Apparently its base vintage is 2008, but there’s not much left of this batch.

2 Hanzell Vineyards Sonoma County Chardonnay 2017
Gorgeous Chardonnay, real elegance and length to it. Quite a bit of winemaker twiddling going on with proportions off stainless steel / new oak and malo / non-malo, but they clearly know what they’re doing.

3 Sandhi Sta Rita Hills Rita?s Crown Vineyard Chardonnay 2014
Served in place of the Au Bon Climat Chardonnay, which despite being ordered in Feb has still not made landfall in the UK, a small example of the disruption faced by importers across the country right now. Not as enjoyable as the Hanzell, a little reductive for my taste, but still a quality wine.

Four Italian reds followed, four different regions and grape varieties, all with some age to them. All four were complex and delicious, but there was a little time pressure on the event and I found myself listening and sipping without much note-making.

5 Barolo Roggeri Ciabot Berton 2012
Wonderful nose, still quite grippy tannins, here to sty for a bit longer, but open for business now with some air and food. Had been double decanted.

7 Graticciaia Vallone 2015
Wow, this was different, in a very good way. Everyone who was successful in the EP offer of the 2016 is in for a treat. Amazing nose and totally delicious. So much fresher than I imagined a wine made from grapes that had been dried out in the sun could be.

8 Once and Future Oakley Road Vineyard Zinfandel 2019
Delicious, the most bargainous wine of the night at £24. Rich and smooth, so good right now, but capable of so much more. Never really ‘got’ Zinfandels before, but this is now on the wishlist

9 Ridge Geyserville 2019
Needed to be really good and powerful to stand out after the previous 5 reds and didn’t disappoint. Really good, Zin-heavy blend (71% I think)

10 Mystery whisky 2021
There was a thorough explanation from Sarah as to the rationale of these releases. It all made sense at the time but now it’s not so clear in my thoughts. As I recall… A consequence of TWS sherry bottling no longer taking place here in the UK means the sherry barrels are no longer available for the whisky TWS used to make stocks were dwindling and not much else to do with it. Hence these 6 releases, one per year and the old reserves will be gone.

Sorry whisky fans, but I am not a whisky drinker and my senses were somewhat dulled. I was very glad of the opportunity, it was tasty, but I’ve got almost nothing else for you. It will be released in about 3 weeks, cost is around £95 (an absolute steal, apparently for a whisky of this age and quality) and it’s been diluted down to 46% from 54%.

Massive thanks to Sarah and Tim and the rest of the tastings team for getting their show back on the road, lets hope it all picks up from here.

Tasting packs for Madeira tasting are now showing as due in and ready to order!

Thanks. If anyone needs a reminder as to the contents: 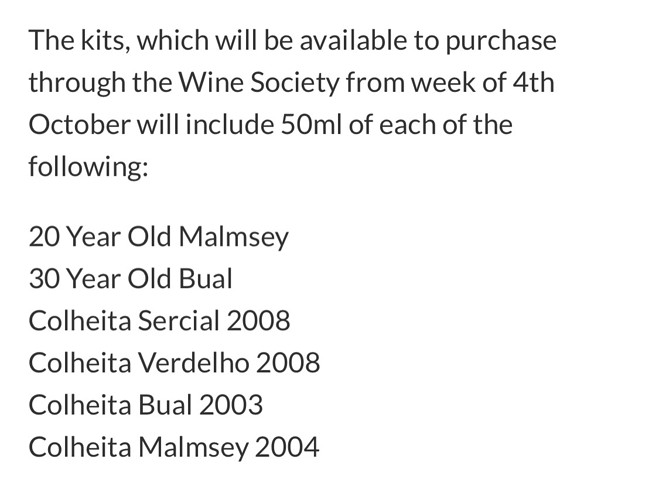 I placed my order for the tasting kit. 50ml is approximately what we served in our North London tasting recently.

They’re doing them as regular society deliveries, which I’m pretty sure the Xinomavro ones weren’t.

Just discovered that these aren’t going out as regular TWS deliveries. They will come from another source, so my order, which included a bottle to make up the free delivery is a bit of a mystery (certainly not being delivered today on the TWS van). MS tell me they are going to let me know when I can expect the tasting pack to arrive.

Has anyone else had their delivery?

Unfortunately it does mean the Grádus Cuvée, Sebestyén, Szekszárd 2016 I’d included in the order (to hit the free delivery amount for TWS) won’t be delivered - MS offered to get it out to me asap, but I’m not making them deliver a single bottle by itself, just have to hope it’s still in stock when I next order.

I was about to call member services about exactly this as I’d selected today as my delivery day (and opted to just pay the postage as I’m on a go-slow wine buying wise).

As usual communication is poor, it’d have been nice of them to let us know, rather than us having to do the digging.

Strangely enough, just had the written response back from MS (very rapid, I must say).

Looks like they will be shipped by TWS after all…

Dear James,
﻿
The Madeira Tasting packs will arrive at our warehouse on Monday and will be shipped before the end of next week, no confirmed date yet.

Anyone going to the tasting with Jo Locke on Tuesday?

The lineup isn’t what I was expecting, but still looks very promising😃

It was great to be able to get back to a real live tasting with other people present, after such a long time. Jo Locke led us through a variety of wines, with the general theme being the influence of ageing on the wines.

I couldn’t understand, though, how several attendees thought it was acceptable to talk loudly at their tables during Jo’s presentation. Incredibly rude.

A couple of points of interest on the wines. We tasted TWS champagne, in bottle and in magnum. The main point of difference being that the bottles are largely based on the 2015 vintage, the magnums on 2008. The magnum had also had slightly longer in bottle. Shame the magnums don’t get the discount at Christmas!

For those who have Taylor’s 2009, Jo felt that this was nowhere near ready.(Personally I wouldn’t turn it down if you offered me a glass). Drink dates were originally 2025-50, and indeed still are on the notes on my wines, but were shown last night as 2035-70. I’m too old and impatient to wait quite that long.

I am thinking about going to the Dec 9th lunch. Never been to an event on Stevenage.

Just need to avoid looking at them until the 11th…

Whilst not an “in” person tasting, I thought I would add this event with Susie and Peter on Instagram live on November 25th;

Edit : I’ve updated the link as the previous wasn’t working.

Yeah, it’s for this

Listened to a podcast today about this. Susie & Peter have had a hand in creating three different English wines (2016 Blanc de blanc ESW, 2017 Pinot Meunier / Chardonnay ESW and a still Pinot Noir from the 2018 vintage). The gift box containing one of each of all three (the only place you will be able to buy the Pinot) will be for sale exclusively from TWS later this month. 100% of all profits will be donated to The Marine Conservation Society and everyone involved in the project has donated …

Seems to be a full programme of events for the first quarter of next year.