Yesturday I went to a wine shop that we all know the name of. I wanted to buy two bottles of Hamiton Russell P/N. I arrived and went in and made my way to the South African reds. I took two bottles off the racks only to find they were both warm in fact most of the wine in the shop was warm. It is not the shops fault that the weather is like it is but it’s a concern buying wine in these conditions. Am I going over the top or do you agree for at leased in places like Waitrose and the like the shops are cool but not the independance.

It depends. If it’s a decent shop with high turnover of bottles and regular rotation of the displayed stock - and high temperatures are an occasional aberration - I’d be fairly relaxed. But some stores I could mention keep bottles standing upright, gathering dust for years, in all conditions.

A really, really famous name in central London keeps wines under halogen lights. The greatest aberration I saw were sweet wines in excess of £100 a bottle - and in a couple of cases well above that - at temperatures you’d be wary of touching, never mind drinking. Always caveat emptor.

And some independent merchants have air conditioning

Not place dropping, but just come back from Caye Caulker in Belize.

Tropical desert island; normally 35c, with a RH way into the 90s. The shops are open to the elements (no aircon), and most things in them have a thick layer of sand/dust over everything.

I would’ve taken a photo, but the store owner looked over suspiciously at my exclamation when I saw it

This photo was lifted from their facebook page - they’ve obviously dusted, but you can see the open air door etc 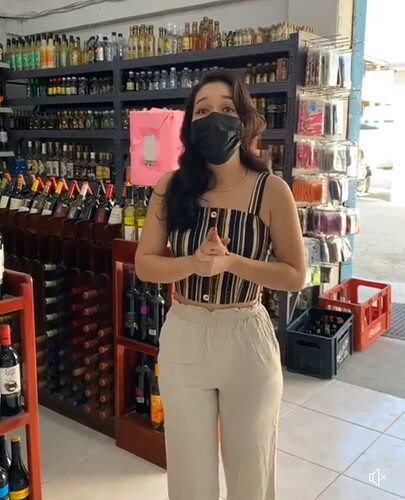 Not that different to the north London chain I was thinking of, although to be fair that’s rarely troubled by 35 deg temperatures (and less sand…)

It’s not just retail. I’ve delayed my latest order from TWS because of the extreme heat this week, now being delivered next Tuesday when it is forecast to be back to normal. I don’t doubt the TWS warehouses are temperature controlled but I’m not so sure about DHL’s vans and warehouses.

If the information was available, I’d also be somewhat wary of any wines shipped in the height of summer and avoid those shipped at that time. Are all the lorries/containers TWS use temperature controlled? Maybe, maybe not…

As if by magic, a TWS van came to ours only today. There was evidence of a fan on the top of the roof - although I doubt that is actively cooling anything - and did think the outside of the box a tad warm, however happily the inside (most importantly!) was still quite cool.

Having had this conversation with a logistics guy in the past, he was fairly confident that due to thermal mass of product in the back of a van, unless it’s crossing great distances, and in there for a long time(and bear in mind, that would generally also include the cooler temperatures of night time) there is pretty much nothing to worry about.

On a related note though, I was a little concerned by the 12-bottle box we received our mixed case in a couple of weeks ago. The handle aperture went directly into the box, creating a hole on both sides. I would suggest that isn’t a great idea, as the air temperature, with that lack of insulation, could rise rapidly. Is this standard practice for the cases now? The 6-bottle one that arrived today was fully sealed, but I suspect the contents would have been considerably warmer had it also had those carry-handle holes in the side.

The large, street-facing windows that many wine shops use to attract customers will become a disdavantage as our weather changes. It will cause a rethink, no doubt, because warm wine is not an attractive thought.
I’ve had this discussion with our local ‘well-known’ store. Many of their wines have back-up stocks in cooler areas so it’s worth asking for those.

This seems like a wise precaution. I’ve just taken a delivery where the sides of the box were hot and the necks of the bottles inside were warm. It’ll be a decent test of how much effect heat really has on the contents, I suppose…

My tuppence worth - we are just back from a three week holiday and for 17 days of that holiday a bottle of Vacqueyras lived in the boot of the car (in the shade but with variable temps between 10 and 20 degrees and both myself and my wife thought it was excellent. What we will never know however is whether it could have been even better or was it exactly the same as it would have been pulled out of the constant temp and coddled nature of the home storage

I panic but probably because I am paranoid about temps or just paranoid individual. South London upper maisonette. Got a wine fridge but its full. Recent trip to champagne bought cases that are under the bed. I run AC when at home but am away for 3-4 weeks in summer including this weekend heatwave. Even sent some wine for storage up North but its a hassle to retrieve and send more. Will look for a bigger place in the winter, and my only req is a cool cellar (or a place for a larger wine fridge).

I think wine will be all right but will never really know.