Growing your own veg / herbs?

Has nobody grown anything since last year?

I’m having a very mixed season. I always plant quite late because (a) I’m away until the middle of April and (b) up here it’s too cold to plant any sooner than that. But this year has been a very strange one up here in the Highlands. It was a very warm spring but (typically) starting turning unseasonably cold as soon as I got home. then it warmed up a bit then went cold again in June and just into July (we even had a couple of July frosts this year). Then, as with the rest of the country it want really hot for a while and then just wet, wet, wet.

Most of the root veg loved these conditions so I’ve got excellent tatties, carrots and leeks but the red onions haven’t done so well. My French climbing beans were really slow to get started but getting some good beans from them now. My peas have been the biggest disaster I’ve ever had. The initial planting only gave my around 10% germination, a second planting gave nothing and a third whilst it is growing is going to be way too late for a full crop from them. Brassicas doing well after rescuing them from blasted caterpillars.

Fruit has done pretty well though the strawberry flowers suffered from the late frosts.

Harvested my garlic a few weeks ago and it’s now nicely dried: 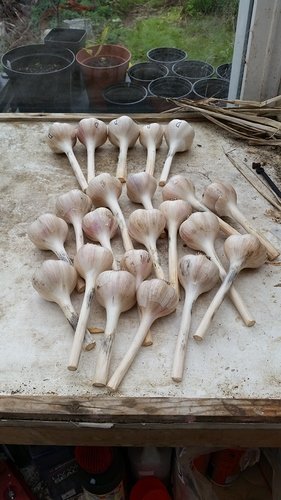 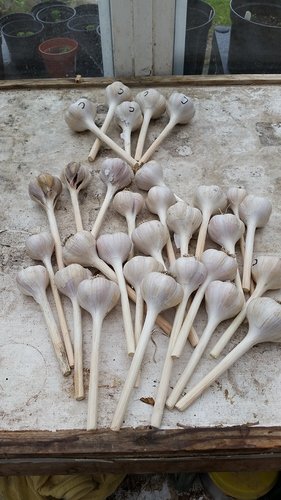 I grew no garlic this year but did lift some shallots today.

Tomatoes are good here in Somerset, Brandywine and Apero being the two winners in the tastiness stakes. Gardeners delight and black russian coming in second with Black Cherry nowhere (watery and tasteless). Still awaiting the San Marzo and another plum tomato (I want to say Cimabue but that can’t be right) which have not yet ripened.

Can’t grow beans this year, all my Borlotti and runner beans have spent the year coughing into a hankie rather than growing. The purple sprouting has disappeared beneath a wave of caterpillars. I saw something about white butterflies being on the decline, not round here they aren’t.

Spuds, as ever are lovely ten of each Pentland Javelin and Pink Fir apple

The fennel has done well as have the cucumbers and the Agretti has done better than last year but not great.

Oh I love Pink Fir Apple! I used to grow them here but they never grew very well and I had a lot rot on me. Also they never kept desperately well. but They were so tasty!

The annoying thing about my brassicas is that I used to net them with the same, very fine, netting that I use to keep my carrots free of carrot fly, but this year I bought some special butterfly netting and, guess what? they got through it and I had to clear all the caterpillars off them. Back to the carrot fly netting next year!

Cold today but not raining. I took the opportunity to harvest the last of the chillies from my unheated greenhouse. (I have been picking them for the past couple of months)

There are more left on the plant, but small ones and I was cold. May go back and get some more, or bin them.

in the photo, Prairie Fire, Spike and Rooster Spur. I won’t grow the latter again because the chillies are too small, though they have a kick. Because only one each of the first two germinated and a lot of Rooster I have three plants of the latter.
I brought Prairie Fire into the kitchen in the hope warmth there will help it ripen its remaining chillies, and maybe that it will survive the winter

We have had success keeping chilli plants alive indoors over winter, in a south-facing window. They go on flowering and ripening, and you can put the plant back outdoors when it warms up again - the weather that is.

Though practicality means it does need to be restricted to smaller-growing plants.

Reviving this topic in the light of closure of all garden centres. I have now planted my best before 09/19 runner bean and French bean seeds with crossed fingers. I also am happy I was so lazy last Autumn that I just stuck a window box of geraniums behind the garage instead of throwing it out. There are lots of green shoots so I have taken cuttings. Again fingers crossed. So am hoping for at least some veg and flowers later on in the year.

The beans will be fine. One seed that doesn’t last well is parsnip. It’s a temperamental sod to germinate anyway…

The other one I struggle with is peas. Fine the year I buy the seeds but if I keep surplus for the following year I get much much lower germination.

For anyone out there; I got all this year’s seeds back in January and I almost always have excess so if anyone would like my excess I can probably help out. Only problem is that, due to where I live, I plant very late so will probably be another three weeks before I really know what excess I have!

I was unusually organised too this year!

Got all I need, and have already passed on some surplus to a couple of local friends.

Do you save any peas from crop to plant the following year? I have got a full batch in small modules in the greenhouse right now. Will keep an eye on the germination rate! I do it with runner beans and french beans and seems to work there.

I do it with my French beans and keep meaning to try it with the peas but not yet. Problem is some years my French beans never manage to even get to full size never mind ripen up!

Wow, that’s seriously early! You must be somewhere a lot warmer than here (Oxford). I don’t plant these till mid May.

Gave up on peas. They’re wonderful of course, but so much effort for a tiny crop that isnt even enough for one meal for two.

Lot of people ahead this year, i think!

Depends whether planting inside or out. I plant my French beans (and a few others) indoors to give them a head start in my rather short season up here!

South Coast. Only planted in peat pots for germination inside the house. Won’t be planted outside for a while yet.

That’s still about 3 weeks earlier than here. I put my runner beans and french beans in pots about mid/late April in the greenhouse for going out end May/early June.

No problem in beans ripening here unlike @MikeFranklin! We are the mild end of Scotland though…can just about manage outdoor tomatoes too provided it’s the right ones in the right place.

at the weekend I went through the seeds I had collected from my parents greenhouse…my dad never through anything away… I threw away the best before 2006 / 2009 and 2012 seeds !

I plant in pots about the same time but never plant them out until beginning of June at the earliest and I still sometimes get stuffed by the late frosts (we’ve had frosts in my garden in July and in August in the past!). Maybe into the cold frames end of May.

Don’t think you have anything remotely to feel guilty about! We might yet need all the food we can grow…I have three compost daleks at allotment so ok for it there and have 3 x 100 litre bags at home. Due to over ordering, I have got 50kg of organic chicken manure pellets too

plus about 10 barrowloads of real manure…which was delivered to my plot by mistake!

I posted seeds through folks doors too…

it was exactly my thought - and whilst we always grow a wide variety of plants every year, we’ve just added a few and planted more this year !

i’ve got two very large compost heaps - one is in “bake” mode and one is ready to be spread. About 200 lts of compost in bags. Nice mistake on the manure

I mentioned my dad didn’t throw anything away - I have more chicken manure and gro-more pellets than I can contemplate !