How much store do others set by using the ‘right’ glass for their wine? Do you often find yourselves experimenting with the same wine in different glassware? I decided to have a play with a few options this evening with this bottle of Les Champauvins. The experiment was prompted by my being slightly disappointed with the wine - I found it more muted on the nose than expected (still perfectly good) so wondered if i might get more out of it by changing glasses.

Interestingly the answer was I might not! I found the nose pretty consistent across all three glasses, with small differences in the most emphasised aromas but general similarity in the intensity. Ultimately I had a slight preference for the largest glass (Riedel performance Pinot noir), which ironically is the one I started with. 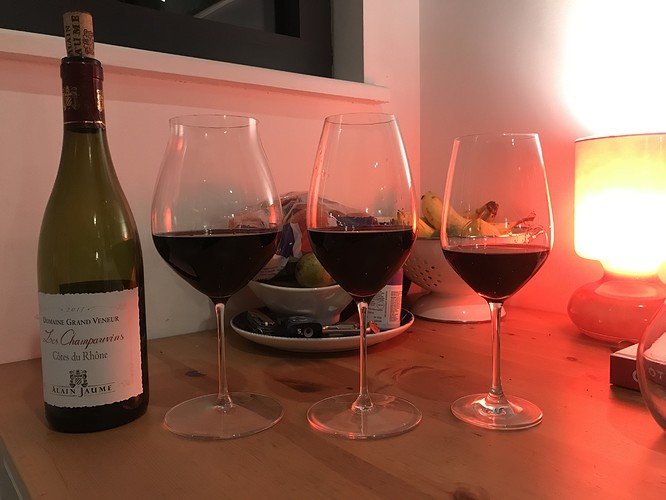 I keep debating doing these sorts of experiments, mostly to try and stop me spending more money on glassware (I covet the Burgundy Zaltos). I’ve never gotten round to it properly, so hats off for actually doing it!

My main experience of this sort of thing is that I know I am really not a fan of ISO tasting glasses. I know they level the playing field, but they seem to do so by making every wine taste at their worst.

I’ve done both side-by-side experiments (where I can sort of convince myself it makes a difference) and experiments where I drink sequentially in both directions, in which case I’m fairly confident there’s no difference in appreciation of the wine.

For me, the main benefit of, say, Zalto is that they are beautiful objects and the ultra thin glass feels great to drink from.

I don’t like very small glasses, but I don’t know how much of that is just that a smallish pour in a large glass is obscurely pleasing.

Many years ago Riedel had a stand at the London Wine & Spirits fair where they asked attendees to identify the four wines poured into four different glasses. I took a guess, but was very surprised to learn that there were only 2 different wines, that tasted different because of the glassware.

Now there’s probably something to say about perception and expectations, did I taste something different because I’d been told that the wines were different? I certainly can’t make any claims about my palate back then (or now, really), but I’d have sworn they weren’t the same. Got a free Riedel glass out of it too, despite my ineptitude.

I’ve not done any comparative tastings since then, but now you’ve raised the matter, I think I might.

All three of these glasses are beautiful and would serve well.

My new glass and decanters | JancisRobinson.com

I’ve got to say I love the Riedel New World PN glass. We got a stonker of a deal a few years back when John Lewis were discontinuing the range and managed to pick them up with 70% off.

I have some Riedel Vitis glasses, no longer available, which I discovered too late are both very fragile and difficult to keep properly clean, due to their shape.
What intrigues me is the claim that their designs are for specific varieties of grape or even appellations. How can they have so many ranges, all of which contain glasses which, though very different, are apparently designed for the same specific variety?
Their latest range, Winewings, appears to be variations on a theme. I really don’t see how they can be grape specific as they claim, as they all look very similar. They boast of emphasising the wine’s minerality instead of its fruit, and are aimed at the wine geek (their word). Personally I find them ugly.
https://www.riedel.com/en/products/machine-made/riedel-winewings

I experimented with this a couple of times recently. Having always been sceptical about expensive glasses and used the same generic probably supermarket glass I’ve had forever, I bought some Riedel xtreme pinot noir glasses that I came across massively reduced. Then it turned out my partner had bought me a Zalto Universal for xmas…

I’ve tried a couple of different wines in all three glasses side-by-side, and found the difference huge, much more than I was expecting. With a barolo the Zalto was far spicier and more intense and complex than the riedel, which was fruitier and softer. The little supermarket glass by comparison tasted muted and just less of everything… With a jura chardonnay it was even more pronounced, the length and complexity with the Zalto was astonishing.

The step up from the generic glass to the riedel is the bigger gap of the two, but both are significant

Impossible of course to do any sort of blind testing…

Interesting food for thought! I think my overall feeling is that there’s certainly something in it, but not everything - especially considering the myriad other factors which can influence how we perceive a wine (temperature, what we’ve just eaten, mood…). And like @RieslingBassist said there are different degrees of step-up, so the question is how far do you want to take it. I suppose at least Riedel is honest in saying its new range is for the wine geek @CCouzens but I definitely agree with your point on how can a glass be truly varietal specific when there are multiple quite differing offers on the table from the same manufacturer. I’m also not sure why emphasising minerality rather than fruit should necessarily be a big selling point; this emphasis was actually the main difference I noted in my mini-experiment though, the middle glass (riedel performance riesling) definitely gave more minerality (rainwater/graphite/wet stone type aromas) on the nose than the other two.

Universal glasses a la Jancis Robinson / Zalto appeal to me a lot. They are, however, pricey and I have a decent track record for breaking glasses. I got 6 x riedel performance riesling and 4 x riedel performance PN for £99 in total in a great deal just before Christmas, so I can break one or two without feeling too irritated. I worryingly predict that, by the time I (/my partner and any guests we have round) have worked my way through these ones, my wine spending baseline will have shifted sufficiently upwards that I won’t think twice about buying Zaltos!

Interesting. Out of sheer curiosity having heard so much about Zalto glasses from many wine luminaries I put the Bordeaux one on my Xmas list. Santa duly obliged. Have used it with one bottle, over 3 days starting on Xmas day with a Vina Ardanza 2004. It was absolutely delicious…but not having used another glass side by side I do not know if the (just how big is that glass, remarked my tea-total wife) Zalto was responsible for an enhanced experience or it was just a bloody lovely wine that would have tasted great drinking it out of a shoe.

I will need to experiment. It might be one gets more out of the experience with a Zalto, but more for psychological reasons…because you expect (costing what it does etc) and want it to. Can’t say I care too much if my brain is playing tricks on me. So long as it remains consistent. I will do a side by side at some point to see if at least I think I can discern a difference.

Are they actually that big?

I know that at least the universal (as with the Jancis Robinson Glasses), they’re designed so that the “optimum pour” to make use of the surface area and funnelling effect is only 125ml and to give the wine space to breathe. That said you could seriously over fill the universals that I have, so I’d imagine that’d be even more the case with the larger bowled ones.

There’s a pretty good chance you’re right. They are pretty though!

The Bordeaux one is 24cm high and has a diameter of nearly 11cm. Capacity is 765ml. My current red wine glass (Cristal D’Arques) has a capacity of 350ml, and is much, much smaller in size.

I noticed I drank a lot more slowly, mesmerised with the wine swirling in the gold fish bowl and really appreciating the sight and aroma, leading up to the sip. Unsure whether this is the result of the Carlsberg of marketing or what. But I am certainly pleased with it. I just bought the Burgundy one and the universal one which I look forward to trying out next month.

My conclusion was that the intensity of aroma is a lot less if the glass is too big and the wine too far from my nose.

However the glass must be big enough to be able to get my nose to the glass opening while drinking the wine normally, otherwise I do not experience the wine’s full effect.

So I tend to use medium-sized glasses - not actually Riedel Chianti/Riesling, but that sort of size and shape. And it excludes ISOs for drinking pleasure, but I still use them for tasting when I am trying to be more analytical.

Doubtless there are other effects, but I got bored and moved on.

If you said what you think is tosh, we could have a more constructive discussion

About 3 years agoI replaced all my Riedels with Zaltos. I bought the white wine the Universal, and the Burgundy glasses. I love them
I did buy a couple of the Champagne Zaltos but for me the stems are too long, same with the sauternes glasses.
I wash and dry them all by hand.
I cannot stand the ISO tasting glasses and we use them at our WSET classes. I think they need to be removed completely off the face of the earth.

Q: How much store do others set by using the ‘right’ glass for their wine?

I also commented that the questioner’s glassware shown were all very nice and would do the job perfectly.

Why do I need to use a paragraph to indicate my opinion when it can be summed up in a word?