It’s that time of year when the Alban Bun is being baked and can be had from St Albans Cathedral.

It is said that the Alban Bun, the precursor to the famous Hot Cross Bun, originates in St Albans where Brother Thomas Rocliffe, a 14th Century Monk at St Albans Abbey, developed an original recipe. From 1361, Brother Thomas would distribute these buns to feed the poor on Good Friday.

The original recipe remains a closely guarded secret, but ingredients include flour, eggs, fresh yeast, currants and grains of paradise or cardamom. The baker today stays faithful to the original 14th century recipe with only a slight addition of some extra fruit. The buns are distinctive in their appearance due to their lack of a piped cross. Instead, the baker cuts the cross into the top of the bun with a knife.

If you live near St Albans you may like to pre-order for collection from the Cathedral; they will deliver but it’s pricey at £10. 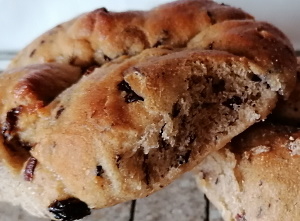 We found it like a less sweet hot cross bun, thus very pleasant halved and toasted.

(I hasten to add, I have no connection in any way other than ordering and consuming)

St Albans cathedral is fascinating. Is Humphrey duke of Gloucester buried there The one that Duke of Suffolk arrested in about 1440’s and had been on Henry VIs council

I do miss living in sight of the cathedral

For East Anglian members Norwich cathedral is the most complete Norman cathedral in UK.

Strange - must be a VERY closely guarded secret - Never heard of it. I grew up in Welwyn, went to College in St Albans and drank far to much beer there. Didn’t know the cake existed until now, so interesting to know.

St Albans Abbey (not cathedral to the locals) is I agree fascinating, fantastic stone and wood carving hidden away in odd corners. As is the Fighting Cocks at the bottom of the hill, but The Goat used to be better, and The Rats Castle… seen some fine bands there.

Beverley Cathedral… I really like. Its small, but perfect & seems to have avoided the worst of the various dissolutions. And obviously Durham, and Ripon. Honourable mention to Paddy’s Wigwam & St Joseph’s in La Havre - just to prove that we can still do monumental Architecture.

They are 4.95 for 4, and an interesting change. Not as much fruit as I like, but very good spice. Made in Macclesfield, incidentally.

I’ve found all Cathedrals in this country pale into insignificance when faced with the sheer stupidity of Albi cathedral and the absolute absurdity of St. Bertrand de Comminges.

I love history, but by God, religion brings out the most insane in us

In addition to the buns which I’ve never heard of despite living in nearby Watford for the last 45 years. There’s now a vineyard, again news to me, in St Albans too. Wimbushes in Chiswell Green (local indie retailer Cellar Door stock their wines, a light red and a rose made from Rondo and a white made from Solaris).

Of course, you may well know this already !

News to me! good luck to them.

good luck to them.

Of course, you may well know this already !

Yup, had a previous vintage! I am not a fan of Rondo, but the Solaris is good.

Through examining Google Earth I also know where the vineyard is

Made in Macclesfield, incidentally.

For the first time in over a decade, the Alban Bun is being freshly baked at the Cathedral

They say they’ve added more fruit and the buns we had at the weekend were full of currants; don’t see how they could fit any more in.

@lapin_rouge - as a local I too call it the Abbey, but they call it the cathedral and the website is St Albans Cathedral, so that’s what I used on this post. I understand it is three things, an Abbey, a Cathedral and a Parish Church.

You are more trusting.
We also had some from last week’s batch, and they had about half as much fruit as Waitrose.

You are more trusting.

Is this blasphemy, Sheila ?

As for trusting, I did not fall for the call I got this morning saying my NI number was going to be de-activated and I was going to be prosecuted, or the call this afternoon from Amazon thanking me for renewing my Prime account and saying they’d taken £79.99 from my account…

The NI one must be new; I only get Prime and microsoft ones.

It didn’t cross my mind to do so but so do I now, thanks for the tip.

I cycle the nearby lane on a very regular basis too. Amazing what’s behind the trees and bushes, I had no idea it was there !

I get those calls and am invariably asked if I am Mr Matthews, I say 'er…no I am detective superintent Matthews" the line goes dead very quickly.