but would love to hear from others about their local vineyards

There’s a small new vineyard in my home city of St Albans, growing Rondo and Solaris. Last year was the first their wines were sold, a dry Rose from Rondo and a crisp white from Solaris. I preferred the white. It’s a vineyard only, the grapes go to a winery for processing and bottling AFAIK they are only available from one wine shop - Cellardoor Wines - in St Albans. CellarDoor were tight lipped about the location of the vineyard, but I’m pretty sure I’ve found it by using Google Earth.

Next nearest to me an established vineyard/winery at Frithsden, near Berkhamsted. Our U3A Wine group visited, had a vineyard tour and tasting with the owner. I understand it’s on the market now though. Planted is Solaris, Rondo and Phoenix.

When my mum was living in Bury St Edmunds I used to visit the nearby vineyards and bring home cases of wine - all white, all still. I don’t know if any of those are still in operation.

I found this one remaining bottle from those times I haven’t had the heart to throw away. Its almost orange colour now… 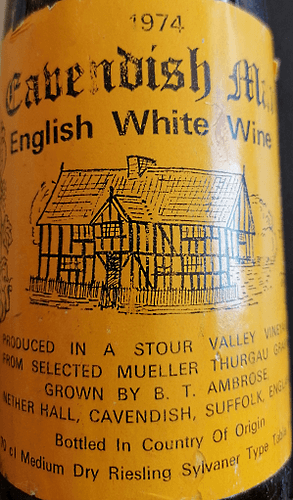 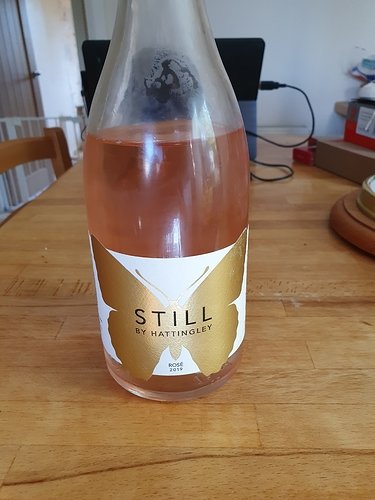 Lovely on a hot evening

Have you tried any of the Albury Vineyards sparkling wines, also very local. They’re very good.

Albury is a small, family-run biodynamic vineyard located in the beautiful Surrey Hills. We produce the highest quality organic English wines; our Silent Pool Rosé was served on the Royal Barge to celebrate the Queen's jubilee, & our...

I have a couple of bottles of the Blackbook. Same quandary.

Coravin’d the blackbook Chardonnay today @Brocklehurstj . How disappointing, not right at all. Looks like a secondary ferment has started. This bottle will be going back. Will check out 2nd bottle tonight.

Oh gosh, I’m sorry to hear that. Susie Barrie and Peter Richards were raving about it on Instagram with Pierre yesterday as well. Fingers crossed for the second bottle.

Edit: They were talking about the 2017 vintage

vine to winery in less than 24 hours. If they couldn’t do that they didn’t make the wine.

According to Google maps a car would take between 18h56 and 19h29 to make that journey.

Considering time from first grape is picked, the van is loaded, that it wouldn’t drive as fast as a car, and taking into account delays for road works, meals, and waiting for cross channel departures, fewer than 24 hours from vine to winery is amazing.

There “Mix” which is mostly Sevyal Blanc is also fun in a weird way, although I could give or take.

I feel the same about that wine, but their chardonnay is good.
I would also second Breaky bottom’s seyval blanc, however its looking less likely they will produce much this year after losing the majority of their grapes to hail a month or so ago.

Blackbook second bottle was excellent. Chablis like, but with a hint of baked apple and spice. Their bottle notes say rounded, but it’s not a word I would have chosen

Excellent news, thanks for letting us know. Still tempted to wait until next year before I start my run of 4 bottles. We’ll see how long that lasts.

It’s surprising how many new vineyards pop up every year it seems. The advantage of a discussion such as this is that local knowledge is often needed and can be tapped into.

I live in Hampshire, which is towards the western end of the main southern vineyard area. There’s a big(-ish) one in the next village along. Waitrose, and increasingly M&S - plus local independents usually carry a range of the more local ones. Plus some from the surrounding counties. Those from further afield are harder to source without sending away for them, so I’m not too well up on, say, Kent, where I am aware there is an active winemaking scene.

So far as Hampshire vineyards are concerned, most are members of Vineyards of Hampshire who have a website, so you can look them up here -
Vineyards of Hampshire - link
Of these, probably the best known are Hambledon (the society often carries their NV, though none at present), Hattingley Valley and Exton Park.

Hattingley Valley is a big operation and well worth a visit if you get the chance - they do contract winemaking for sparklers from around 10-12 other estates. HV is Britain’s biggest exporter of sparkling wines to the USA, and also produces the wines for Pommery’s English sparkler. Emma Rice, the head winemaker is an entertaining and affable host if you can get one of their extended winery visits. Their website is worth a look, especially for the “management lunch” picture in the style of the mad hatter’s tea party!
Hattingley Valley

Hambledon is famous for being the first vineyard in England to plant wine grapes in the 20th century (or so they claim), but this was for still wines, and they were all grubbed up in favour of the classic champagne grapes. This is another sizeable operation. Hambledon is currently building a big visitors centre (bigger than their existing one) which should be finished very soon I think - also well worth the visit for a tour of both the vineyards and production.

Exton Park is another quality-oriented producer of sparkling wines - they often do a single meunier which does well here. Winemaker is Corinne Seely, who is the wife of Christian Seeley , MD of AXA Millesimes, who own more classical wine estates than you could shake a stick at.

Jenkyn Place make a good range of sparklers, slightly different as (I suspect) their vineyards are on greensand over chalk, which would make them more like (most of) their Sussex brethren. Winemaker is Dermot Sugrue at Wiston.

Cottonworth and Black Chalk up in the upper Test Valley are very good, and Waitrose’s own sparkler comes from here too. (Nyetimber has a large block of mostly chardonnay on the chalk here).

Danebury make both still and sparkling wines (M&S often have them), working mostly with non-classic grape varieties, though they seem to have been reeling in a number of prizes of late for their still wines, so maybe worth a look if you are after those.

I don’t know a lot about most of the rest, though such as I have tried would suggest the standard is high. After a slightly wobbly start, Raimes are now good. Of others worth trying and not members of Vineyards of Hampshire, the still Pinot Noir and the Bacchus from Titchfield Vineyards are good. Christian Seeley’s own sparklers from Coates and Seeley are good, but hard to find for some reason - maybe he exports them? Waitrose’s own sparkler is from their estate in the Test Valley and is reliably good.

No doubt there are others, though that should be enough for now I hope!

I have tried around 35 - 40 wineries I think, my favourites so far having been (in no particular order): Gusbourne, Sugrue Pierre, Black Chalk, Nyetimber and Rathfinney.

Damn shame I am not in or near a wine region because my local Waitrose or M & S don’t stock any other than the few mainstream, and I have the double disadvantage that I am not near to go and visit.

Of those I have tried, the Ancre Hill was great. I have had English Oak twice - once was good, the second was a faulty bottle (fortunately not mine!)

Worth keeping an eye on Waitrose’s 25% offers - a case of English sparklers fits this very well (with apologies to our hosts here of course).

I have bought a case from Waitrose before during a promotion, but in my quest to try as many as possible they don’t have many that I haven’t tried already.

Yes, if you are an “advanced consumer” in this way that’s not going to work too well.

Waitrose Cellar (which is better to order on-line from, as they are rarely found in the actual shops) sells a couple wines from Simpsons. The most interesting we tried was a still Pinot Meunier vinified as a blancs de noirs. Definitely worth a try, and still available. They also sell their Chardonnay, which is very good indeed.

Waitrose are pretty good with their English selection. My local often stocks a decent selection of very local vineyards, including Maud Heath which is worth a punt.

Fingers crossed for the second bottle.

Even better on day 2, moving slightly away from Chablis, perfect with grilled lemon sole and home grown broad beans, although my other half said her Pouilly Fumé worked well too . I should have decanted the Blackbook on day 1.

Out of curiosity - what did you pay and in which direction did it move away from chablis?

I dont get it - and please do tell me otherwise. Vitis vinifera, is native to the Mediterranean region, and is labour intensive in cultivation, harvest, & conversion to wine.

England is NOT Mediterranean in temperature, England is expensive in labour and land costs. So the final product must cost (I guess) 3 times as much to produce, maybe more?

I suppose that the traditional argument is around climate change - southern England now is frankly no different in climate to Champagne 20 years ago. Almost all grape types are migrating away from the equator and (if this continues unabated) it will be impossible to produce some wine in areas where it was traditionally made. Witness the stunning increase in permitted varietals in Bordeaux, and the quiet steps by some producers in the Loire to plant Bordeaux varieties with some confidence. Yes, some of the regions (such as southern England) are expensive in land and labour costs - but those arguments apply equally to the arable crops that would be grown on that land anyway. If you want to offset high land and labour costs would you a) crack on with sheep farming or, b) have a go at a world class sparkling wine? I’d bet the risks are not too far out of balance…

A slightly emotional argument which (to my shock) was made to me by a French wine aficionado was the view that wine is an expression of the place. Wine made in England or Wales is an expression of that place. There will be flavours and aromas that you simply cannot get anywhere else (the guys at Camel Valley are really passionate about this if you speak to them). Some of these are flavours and aromas that (to my and most palettes) are not as “good” as those from wines elsewhere. Some of them are “better”. It then comes down to a price judgement. And in a small but increasing number of cases I’d say that England and Wales produce some wines with a uniqueness that I’d pay for, and made to a standard that competes with similar priced wines elsewhere in the world.