We(two of us) usually drink two bottles of wine with a meal Thursday, friday, saturday, sunday. We drink half a bottle between us for each main meal I open a new bottle and decant half the bottle several hours before the meal. I then store the remaining half bottle in the fridge until the next day. The next day I take the remaning half bottle out of the fridge warm it in the microwave and then i leave it in the jug on the dinning table for several hours untill the meal,
I find that second half of the bottle -which has been open for 24+hours and has been stored in the fridge -tastes much better than the first half bottle. It would be nice to get the first half to taste as good as the second half. Perhaps i should decant the whole bottle 12 hours before drinking. Any thoughts would be welcome

Hi @BENEDICTNASH, decanting normally will differ from wine to wine with older more fragile wines needing less air than younger more tannic wines. Have a look at these threads and see if any of the responses help:

Hello. Being fairly new to the world of understanding and appreciating great wine, I recently attended a WSET level1 course in wines and found it very fascinating. I’ve seen a lot of discussion about decanting and its benefits. Is there a set way that wines should be decanted to get the best from them? Any advice or sources of information greatly appreciated. Cheers. Rich.

Hi all, Apologies if this is the incorrect place for this topic but I wanted to ask a quick general question and a specific one please. Does anyone have any general guides for decanting times? and… How long would you decant a bottle of… Exhibition Pomerol 2011 Exhibition Morgon 2013 Falua Reserva Alicante Bouschet Tejo 2011 I decanted a bottle of Chateau Beaumont on Saturday for about 90 mins and it was absolutely exceptional - It was the girlfriend’s first try of a claret (she’s always a…

So a few points about me! I’m not really very knowldegeable about wine technicalities I live alone and don’t drink a great deal. Usually just one glass of wine a night. I only drink reds and mainly wines like Bordeaux, Rioja, Rhone So, once opened, I don’t usually finish the bottle for about 6 days. I used to use the cans of nitrogen which was okay but a bit fiddly and not too cheap. Recently, despite high levels of scepticism, I bought an AntiOx stopper from TWS and have been surprised by ho…

As @Leah pointed out, it can vary from bottle to bottle, and personal taste varies too, so what works for you might not for others. (I usually think wine tastes best on the first day, but that is just my opinion.)

So I say you should just try what you suggest. Why not? That would be a lot more instructive than any theorising on the subject,

You might also try the following - open a bottle the day before the first day of drinking it, empty it into two half bottles, and then immediately sticking both halves in the fridge. Then you could leave each half open to the air as you see fit on the day.

It’s absolute voodoo. I’ve had hearty, young southern french reds go flat as a pancake inside an hour (Mas Champart St Chinian anyone?) and delicate flowers of wines that were brilliant in the dregs of a decanter 10 hours after opening. There is no rhyme or reason and I open, taste and take my best guess. I will always decant CNDP or Gigondas under 10 years old, I usually don’t bother with Pinot unless for sediment.

We decant everything red. I’m considering starting to decant white wine as well. A friend of mine takes the cork off Champagne and lets it breathe in the open for 45 minutes before he drinks it! That’s a step too far for me.

What I love is leaving a cheaper younger wine from let’s say LR or Rhône for a couple of days then trying it and it’s wonderful.

Agree ref old and fragile wine to tread carefully although I’ve always decanted these for at least 20 minutes and still the final glass is the best.

We decant everything red.

Same here - and can’t say it failed us to date.

I decant and sometimes double decant reds (but not for too long) and occasionally more serious richer whites. Not a fan of (most) wines after day one, but there have been exceptions,

You must have a very tall microwave.

I decant pretty much everything into my etos but that’s because most of my bottles will need to last at least 5 days. However what changes is how I decant. Some young ones or ones that I know need a good decant get poured in pretty vigorously to aerate them a little, other older wines (20 years plus) get poured in very gently essentially trying not to mix too much air into them.

You must have a very tall microwave. 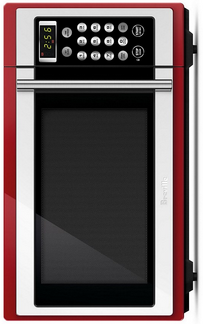 You lose the rotation but get the job done

he next day I take the remaning half bottle out of the fridge warm it in the microwave and then i leave it in the jug on the dinning table for several hours untill the meal,

why microwave if you are going to leave it on the table for several hours before ?

I would never microwave a wine given the action of uneven heating an the fact that alcohol boils at a significantly lower temperature than water - you will need to be very careful on a low power and short bursts.

A friend of mine takes the cork off Champagne and lets it breathe in the open for 45 minutes before he drinks it! That’s a step too far for me.

I was told about someone doing this several years ago - transpires they were actually serving champagne to cold and the waiting time was effectively waiting for the liquid to warm a little.
Eventually migrated to taking the champagne out of the fridge 20 mins before opening and then serving straight away.

I did wonder myself why the microwaving was necessary before a decant of several hours, but I don’t think it causes any harm - if used sparingly of course. It is not unknown for sommeliers to give a wine a quick zap to bring it up to serving temperature.

Having said that though, I personally would use warm water.

Was thinking about dipping my toe in the Barolo EP offer this year. Question is if I decant a bottle of the Ciabot Berton 2010 will this give me an idea of what an even older Barolo would taste like?
My friend has been banging on about great Barolo is and that is can last 40 years plus.

I think it should give you some clues. Not that I’ve had that specific wine. Different Barolos come round at different times. There are some that take a long time to come round and last forever and others that only need a few years to be delicious.

Looks like a reasonable price from a good producer, I’m quite tempted.

can last 40 years plus

I am sure it can, but will it?

In the basket it goes then. Thanks

I am sure it can, but will it?

Or more importantly - will we?

II pour it into pyrex jug for decanting and for putting in the microwave. It is possible to a bottle in a large microwave by laying it on its side.