All of the above were in stock at the piddly little Cromer Lidl when I glanced - for research purposes - yesterday. I only bought one bottle for trying later and that was the Ribolla Gialla brut espumante made in Bardolino. I’m assuming it’s a Charmat Prosecco style (rather just artificially carbonated as that would be labelled Frizzante) and may be OK being labelled brut rather than extra dry. I’ll see after this month is over. Not sure why it’s claimed to be from Puglia; Bardolino as we all know adjoins Valpolicella on the shores of Lake Garda.

The Beerenauslese, as far as I recall, is made from Phoenix and Orion (I may be mistaken) but it doesn’t feature on the Lidl website. I wonder how pleasant or not it will prove… Seems odd though to see it in the bins which comprise the “Italian” theme.

Anyway do tell what you make of them, @Brocklehurstj 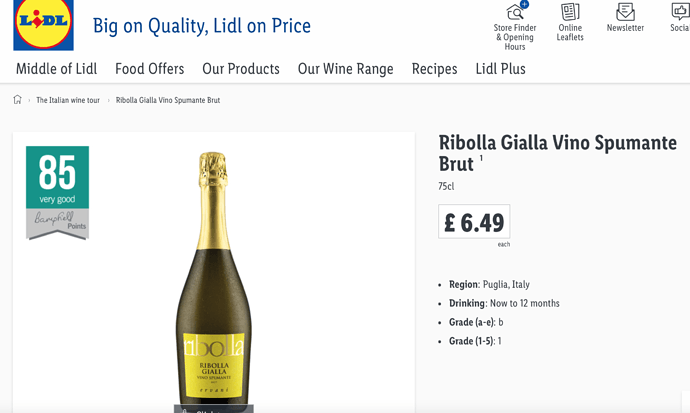 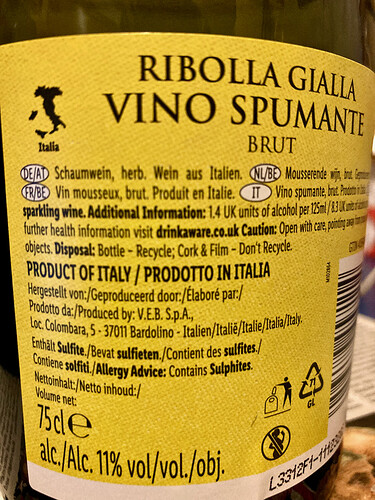 The winery is indeed in Bardolino. It’s made there by Vinicola Enoitalia Bardolino (VEB) Enoitalia | Leader of Italian wine globally
45°30’24.1"N 10°45’54.7"E
Presumably they truck over the fruit from somewhere in Friuli-Giulia.
And also presumably it is a re-labelled for Lidl incarnation of this
Pop-it Now Spumante | Enoitalia

The Beerenaulese is a remainder from the Winter Wine Tour (where I think it’s annual fixture for Christmas). I’ve got a bottle from last year somewhere but haven’t tried it yet. If you’re lucky they should be flogging these for £3.99 but the availability, timing and scope of the sell-off from the previous WT seems completely random from store to store.

I did open a bottle of the Ice Wine over Christmas - also a Winter Wine Tour regular - and it was top notch.

The Beerenauslese, as far as I recall, is made from Phoenix and Orion

It wasn’t in the Italian festival bin, was on a gondola end as I approached. I’m a sucker for sweeties, so just grabbed it. Didn’t consider at the time it might not be Riesling. Was only £7m but still might live to regret it!

£7 million seems a bit steep even if it was Riesling @Brocklehurstj ? Must be a posh Lidl up your way!

I think @Brocklehurstj is flush with excess cash

Was only £7m but still might live to regret it!

And to think there are forumites pondering spending £40 on Ridge

I think I’d rather have their (cheaper) Cava.

Phoenix can make a really NZ savvie like wine in England, but I’ve not had a varietal since Three Choirs started blending it

Had the Luganda last and it was pretty decent for under £8.

You were lucky: Riesling still full price here, but all the Italians (at least all I wanted) available: maybe they are getting better at distribution?

I didn’t need to hear that

I’m pretending I didn’t! I don’t need to know about Decantalo, I must avoid Decantalo. I must not visit Decantalo.

Stop it. I just found out a wine I really love is available on Decántalo

Don’t encourage him! As soon he shares the info he will be buying it before the rest of us and then I’ll end up on the site trying to justify another purchase!

Any recommendations on wines from the Lidl Italy selection? I need to stock up with some pasta friendly Italian reds.

I’ve not opened my purchases yet (Damn dry January).

It really depends what’s in each store, it’s been a week so some may have sold out.

don’t intend to spend another penny

image1170×1108 90.5 KB
Just had a little look to see what might make it up to free delivery and suddenly BAAM, an order confirmation email arrives.