Cornas Dinner in London on Wednesday

I hope that this is OK to post here…

A group of us are getting together up near Liverpool St on Wednesday evening to open up a selection of mature bottles from Robert Michel and Vincent Paris who took over his vines as a ‘compare and contrast’ exercise. I’m very much looking forward to it having bought recent vintages of Vincent Paris’s wines from the Society!

Currently flights are as below. Contributions are from attendees’ cellars and if you’re able to bring a Paris/Michel wine then brilliant, though an older Cornas which fits the flights would be fine!

We’ve reserved a private room and food and corkage is £57.50 each (to be clear this is non-commercial!).

Please feel free to message me if you’re interested.

Looks like a fun evening. Nothing like that in my hoard, but let us know how you get on so I can drink vicariously

Fantastic, some photos would be good too

My notes from this as follows. It’s fair to say that there wasn’t much love for any of the Vincent Paris wines around the table! 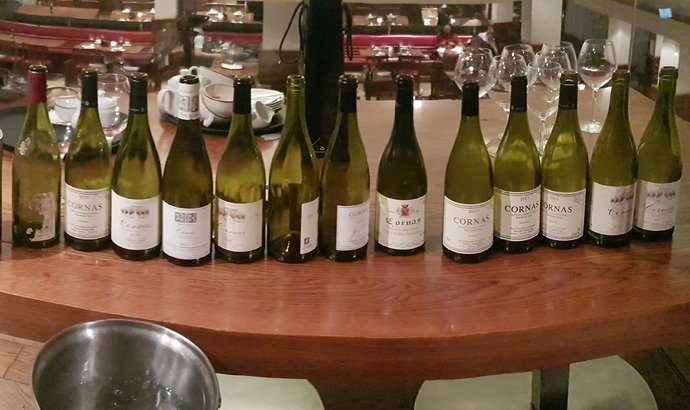 Very lifted. Cote Rotie like? Lard and smoked pork fat. Later something a bit dirty emerges - kidney and rubber. Lean, high acid - as with all 3 of this flight. 3*

FWIW my final bottle of 3 of VP’s 2007 St Joseph - drunk a year or two ago- was a mess of volatile acidity.

Wow! Hedonistic nose - loads of new oak, ripe fruit. Structure emerges with time though - there’s no mistaking that it’s Cornas under the expensive make-up. Very, very different to everything else tonight but I like it… 4.5*

MUCH riper than any of the 2007s. Fuller, more together. Tannins are fairly rustic.on the edge of volatile. Bacon fat, damson. 4*

Banana and butterscotch on the nose?? Reminds me of Rioja! ‘Smudgy’ texture; feels as though someone has sketched this wine out and then gone over it very lightly with an eraser. Comes across as silky next to the VP (!). Generous palate - closed aromatically though. 4*

Bretty. Peppery. Brett. Some red fruit in there too? 2.5*

Notes after this a little sketchy…

Creamy in the mouth. Smells like under-ripe Cabernet - green pepper and a bit of cassis. Very unattractive. 2*