'Corked' and other defective wines

Having worked in The Society’s Tastings department for over three years where we’d often be opening and tasting a hundred or so wines a week (woe is me) I’d say my experience of ‘faulty wine’ is probably 1 in 50 bottles with cork taint (i.e. TCA, the wet newspaper, damp basement smell) accounting for probably 70-80% of these.

The rest are a combination of other factors including: oxidisation (more regularly seen in white wines as reds have natural barriers to this such as alcohol, tannin etc), volatile acidity (a common trait with Musar which is mentioned above and is seen as a positive in many wines - although I had some '97 Musar the other week and it was almost undrinkable because of the high VA levels), brett (again, can be considered a positive and gives wines, especially Rhone/southern French reds, a meaty, ‘farmyard’ smell) as well as number of other issues that are too technical to get in to now! It should also be mentioned that some times wines (even individual bottles) just don’t show well, are tasting ‘astringent’ or are otherwise in a dormant phase without any actual technical wine fault.

Either way they don’t provide drinking pleasure which is what we’re all about at The Society!

On a seperate note also discussed in this feed, the diam cork which is being used a lot recently is mainly to stop oxidisation (especially with white Burgundy) but does almost completely stop any possibility of cork taint as well. I (personally) believe it to be the best possible closure for wines designed to age and develop in bottle. After all, a 50yr old wine doesn’t ‘develop’ cork taint, it’s corked from the day it was bottled and just gets worse the older it gets.

Aha, found a relevant thread for this train of thought!

I’m a bit behind on my Decanter reading, and during this weekend’s catch-up I saw a fact box in the April issue’s article on corks, which included this:

You can sometimes improve a corked wine by pouring it into a jug lined with plastic food wrap for several minutes, as the polyethylene in the wrap attracts the TCA away from the wine.

Has anyone ever tried this? It’s (luckily) been a good while since I last had a recognisably corked wine. Might give it a go, nothing to lose if it’s going down the sink otherwise…

@Herbster I haven’t tried myself, but I remember there being a vigororous discussion on the technique years ago on the UK Wine Forum. I’ve searched for the thread for you without success so I think it was on the old forum software.

The important thing is to find the correct plastic component, which I can’t remember.

IMO only worth bothering with on wines that can’t be returned to retailer.

You can sometimes improve a corked wine by pouring it into a jug lined with plastic food wrap for several minutes, as the polyethylene in the wrap attracts the TCA away from the wine.

Filtration and purification systems now exist that attempt to remove the TCA from corked wine to make it drinkable again, though there are few means of reducing the level of TCA in tainted wine that are approved by the TTB (formerly BATF).

One method of removing TCA from tainted wine is to soak polyethylene (a plastic used for applications such as milk containers and plastic food wrap) in the affected wine. The non-polar TCA molecule has a high affinity for the polyethylene molecule, thereby removing the taint from the wine. The surface area of polyethylene needed to reduce the taint to sub-threshold levels is based on the TCA level in the affected wine, temperature, and the alcohol level of the wine.

This can be done at home, as advocated by Andrew Waterhouse, professor of wine chemistry at University of California, Davis, by pouring the wine into a bowl with a sheet of polyethylene plastic wrap. For ease of pouring, a pitcher, measuring cup, or decanter can be used instead. The 2,4,6-trichloroanisole will stick to the plastic. The process is effective within a few minutes.[6]

Some vintners have used the so-called half and half mix to remove TCA from wine (the TCA in the wine is sequestered by the butterfat in half and half).

The French company Embag markets a product called “Dream Taste”[7] which uses a copolymer shaped like a cluster of grapes to remove the TCA taint from wine.

Thanks @cerberus. This is what science is all about!

True enough. I want to try it now though, just out of curiosity … and to see what kind of looks I get from my cohabitants

I want to try it now

Well, no, I’d rather just not have a corked wine. But you know what I mean…!

I’ve tried the food wrap or plastic bag trick a few times. For me it worked to an extent, but also seemed to leave a plasticy taint. And the polythene is supposed to remove other aromatics too, so not ideal. All things considered I decided it was not worth the faff.

If you want to try it, make sure the food wrap is polythene. I once tried it with another plastic, and taste was horrible, I suspect due to plasticisers that leached out of the plastic.

not worth the faff

Thanks for sharing @SteveSlatcher, I’m starting to lean that way myself.

make sure the food wrap is polythene

The final straw! Just checked and our Asda clingfilm is PVC.

Knew it sounded too good to be true…

We have had a bad run in the Tastings team the last couple of weeks with a higher than usual proportion of wines being rejected.

I then saw this article from a leading Australian commentator. 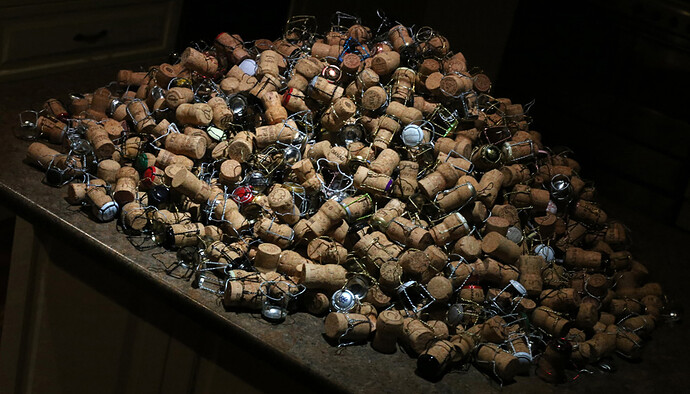 I am alarmed and dismayed to report that the positive trend that I observed last year in the effects of natural corks proved to be short lived, and my tastings for my Australian Sparkling Report this year have seen a stark and dramatic return to...

I had what I thought was a dodgy bottle and got a refund from TWS. I’ll look through my emails to find out what it was. If memory serves me right, it was a Chilean Merlot about which there had been a few complaints.

This is a really interesting topic for me. I went for ages without finding a wine I could detect an issue with, then bough a case of Chablis Bougros '06 of which 4 were clearly faulty (2 pretty much undrinkable) and two were absolutely perfect. My issue is that, while I thought they smelled and tasted oxidised, I don’t have sufficient knowledge to confirm this was actually the problem. I’ve detected the same “oxidation” taste in a few other whites recently; a Dr Burklin-Wolf Wachenheimer Rechbachel '02 riesling, another GC Chablis ('08) and a hint in a Trimbach cuvee Frederic Emile ('08) that seemed to disappear very quickly

I read some comments about reduction. As a chemist I understand both processes but have no idea what the result would taste like?

I may be lucky to never have had a truly corked wine as it sounds like it is quite unmistakable and undrinkable! Also very interesting about using polythene to remove the taint. I would reckon it would also remove other components of the wine as indicated earlier but not sure what the ultimate taste difference would be

It was a Chilean Pinot. The following was from Mark Buckenham. “I believe that some bottles from a specific lot were exhibiting signs of excess sulphur. It seemed to vary from bottle to bottle, and does not appear to have re-occurred.”

Hi all, I’m after some advice from the wise minds and acute palates here! Over the years, I’ve sometimes noticed a strange aroma in some red wines, that instinctively puts me in mind of rotten shellfish. There doesn’t seem to be any pattern with respect to grape, region etc. I’ve started to note it down when I recognise it and think I have noticed it in the following:

• Society’s Chilean CS Maipo 2013 (a little); didn’t notice it in the 2015 though, which I tasted in the last few weeks.
• A cheap, feral Shiraz from Sainsburys that must be Australia’s revenge for the rugby
• 3C cariňena
• A Fist Full of Schist GSM blend (a hint)

I’m going to systematically note when I notice it from now on,so there’s no mistake.

Does anyone have any suggestions as to what this could be? Is it the wines or could it be me not quite getting some aroma that’s meant to be there, maybe something vegetal (but it doesn’t tally with anything on the wine notes)? I wonder, given that I’m instinctively reminded of rotten shellfish if it is sulphur (I think this might be what I noticed in a Chilean Pinot for which I was refunded and that Mark Buckenham subsequently told me had a sulphur issue in some bottles)?

Any thoughts are gratefully received… Thanks.

@robert_mcintosh @ricard Chaps, drawing from your experience, do you have any insights here? It doesn’t happen often, but occasionally wines seem to pop up with this aroma.

Many years ago, I had a bottle with a rotten shellfish smell - a Northern Rhone Syrah. It brought to mind a seaside rock pool. Got a refund from the merchant who said “it was probably a baterial infection”. Haven’t come across it since, nor found anything written about it.

Thanks steve. I will investigate.

It is very easy to find out what oxidised wine is like. Just leave a bit of wine in the bottom of a bottle at room temperature for a week or so. Check “progress” every day to see how it develops.

I was gonna say it sounded a bit like a bacterial smell. Haven’t yet had the pleasure of experiencing it in a wine though.

The smell seems to predominate too, with other aromas muted.

Obvious when you say it. And yes, it’s the same taste as the bottle of cooking wine that sits open a week, you pour a glass of and have an immediate u-turn on!

I’d probably suggest it’s a type of mercaptan, especially methyl mercaptan which can be prevalent under screwcap. I often think it smells slightly like stagnant water but can also give off a slightly salty, rotten cabbage smell. Either that or something called diamethly sulphide which, in small quantaties creates a nice blackcurrant smell found predominantly in cabernet and shiraz which would make sense for your case. However, in larger quantites (we’re still talking millions of nanograms per litre) can give a smell of canned corn or canned tomatos which I think could give a slightly tinned, rotten shellfish odor? I believe this can be removed used copper sulphate so isn’t completely unavoidable.