Beautifully balanced fruit combined with enchanting bouquet in this Chianti from the heart of the classic region. The vineyard is at high altitude giving finesse to the fruit while the fine vintage adds body and keeping quality. Certified organic.

Has anyone had this wine (or a previous vintage)? And more specifically, can anyone compare it to the Fontodi?

I’m not familiar with it but I missed out on Fontodi 16 due to it being sold in 12s so I couldn’t put 6 in reserves. I’m having the same problem with the Muga Reserva 16 and am pondering mixing 6 and 6. If only they were both available at the same time (or maybe they were, in which case if only I’d thought of it while the Fontodi was still available!)

If you would like a little more information on the wine and Volpaia, we had a great session with Fede of the family and many of our Members on Zoom a couple of days ago - the recording of which can be seen here.

If anyone would like to be involved in future winemaker Zooms, they programme is available here. And there are going to be LOTS more added for Wine Champions so keep your eyes peeled.

I have a bottle and was thinking of trying it this weekend, to see if I should buy more. I imagine it’ll be more trad chianti in style than the quite rich fontodi CC but will happily report in due course. I had a bottle of 2016 fontodi last weekend so can compare reasonably confidently.

@tom it’s not clear if you watched the zoom meeting with the winery, but you should, very interesting. I asked a question specifically on the 2016&17 which are listed. The answer was detailed and interesting.

I haven’t but I shall!

Try at around 42 minutes for my question, sorry about the Essex accent

Is that the riserva/gran selezione?

An enchanting bouquet combines with rich, ripe fruit in this Chianti from the heart of the Classico region. The vineyard is at high altitude, giving finesse to the fruit, while the warm vintage adds body and keeping quality. Certified organic.

Great thanks for posting this, just finished watching and learnt a lot! Looking forward to the Christmas Fine Wine list now!

Hmm - that’s odd. It’s their normal CC but 2015 was quite a forward year, generally, and you wouldn’t expect a £15 chianti to have the structure to need 6 years. Some 2015 CCs you’d expect to be bigger were approachable last year.

Add to that the fact that TWS windows generally start a little early, if anything.

Channelling my imaginary Sherlock, I deduce that the drinking dates may be wrong. Worth checking?

Really good video - thanks for highlighting it! I thought she came across well and there was a lot of interesting stuff. Good question, too, as the chianti vintners seem a little defensive about 2017.

Just got around to watching this. Was another lovely (and lively) winemaker session. Thanks for the question, I’m sure it reverberated with all the members looking at both these wines.

Her answer was great and echoed another winemaker Zoom chat (was it Mac Forbes?) about the more challenging vintages and how sometimes they can result in more interesting wines. Certainly allows the quality of place and winemaker to shine through

I’m only catching up now on the YouTube video but I’ve visited Volpaia twice and confirm it’s a magical place. Because I was on wine tours we had the joy of meeting and dining with Federica’s mum, the iconic Giovanella, who’s just the most amazing woman. In autumn/winter it can be a bit cold there - it’s quite high up and feels isolated - but in spring/summer it’s absolutely gorgeous and has a restaurant and accommodation within the village.

Just looked on L&W and they have the drinking window for the 2015 starting in 2018 which sounds more like it.

I drank my 2016 Volpaia over the weekend, as planned, and am ready to report back.

Positives: it’s well balanced with all the typical chianti attributes. Some tasty fruit, that subtle tart edge and not at all heavy. Good with food, as you’d expect.

It also lasted well in the bottle and was, if anything, better after 24 hours. It certainly needs a few hours to open up, as a minimum.

But how does it compare with some of the alternatives? For me, it’s some way off Fontodi but that’s fair enough. Fontodi’s CC is bigger, richer and more complex than any other CC at that price point, in my view. It’s also not up there with Isole e Olena (which is probably the one to get if you like a graceful, floral style of chianti) or Riecine. I’m also not convinced it is better than San Felice.

That said, I definitely enjoyed the Volpaia and if I wasn’t already stocked up on CC and saving my pennies for the 2016 gran selezione wines and the 2016 brunello, I’d probably get some more.

I received two bottles of this in lieu of the Chianti Classico, a warehouse picking mishap.

This is not a complaint post as that issue is resolved.

Anyway can you or anyone out there pass on any news on these as I did not see anything on TWS web pages. 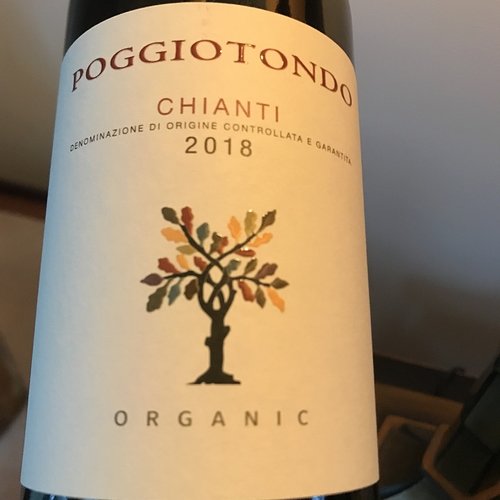 Firstly, sorry to hear about the picking error - how unfortunate! Really glad to hear you’ve got it sorted though.

I’ve had a look on our database and found the following info on the wine you’ve received instead:

A vibrant, full and fruity Chianti made by Alberto Antonini, one of Italy’s brightest winemakers, from organically cultivated vines on his family estate northwest of Empoli.

The Poggiotondo estate is situated in the hills northwest of Empoli in western Tuscany, where the hills are south and south-west facing and planted primarily with the classic Tuscan grape variety sangiovese. The soils here contain fossilised marine shells proving that this undulating landscape was below sea-level in prehistoric times, and providing almost perfect conditions for vines. In recent yearswinemaker Alberto Antonini has been converting the estate to organic farming and achieved certification in 2014.

I hope this is useful background info on the wine - would love to hear what you think when you try it!