Charity wine auction for victims of the Australia bushfires

I know many of you will have been horrified by the news of the Australia bushfires, and of course the devastation will likely impact parts of Australia’s wine industry. We’re preparing an update on how some of our growers have been affected and I’ll update you ASAP.

In the meantime, I thought it might interest you to know that Gus Gluck has organised an online wine auction to raise funds for WIRES (Wildlife Rescue Emergency Fund) and Red Cross Australia’s Disaster Relief and Recovery Fund to help some of those affected:

As you are most likely aware the current fires in Australia are the worst in recorded history. There has been significant loss of life, destruction of homes, farms, lives, flora and fauna. It's hard to know how to help, but here is one way:...

We’ll be donating some Penfolds to help, and there are loads of other incredible Australian wines available, in case anyone would like to bid.

If you’re looking for more information, Jancis has featured this in her roundup of ways to help here:


Interesting Article in the Guardian concerning the devastation of the Adelaide hills wine industry,
Brocklehurstj 2020-01-07 18:01:50 UTC #3

It’s a horrific situation out there. From the photos and articles I’ve seen I don’t think it will ever be the same.

Charity auction is a great idea, some exceedingly nice bottles to go under the hammer.

We’ll be donating some Penfolds to help, and there are loads of other incredible Australian wines available, in case anyone would like to bid.

I can only see one bottle of Penfolds up at the moment, is that from TWS? Very generous (and well-deserved) if so

I can only see one bottle of Penfolds up at the moment, is that from TWS? Very generous (and well-deserved) if so

Just a thought… but if the Penfolds has travelled halfway around the earth then it will have been a contributor to global warming. So it’s ironic that it ends up in an aucton in aid of the Oz bushfires.

I’m not really picking on Penfolds, could be anywhere long distance.

Or maybe the carbon footprint is insignificant except as a vague principle. Be interesting to know if anyone has the numbers?

Maybe I’ve misunderstood, but I thought it was a UK auction, in which case the only thing going halfway round the earth is the money raised.

But correct me if I’m wrong.

The wine had to travel first…

The wine had to travel first…

Once upon a time I was able to think things through

It’s called parenthood! They suck every last ounce of working brain cells from our beings …

It’s okay. I’m going to get my revenge on them by being a terrible burden in old age

Do it!! Pilfer the contents of their wine fridges

@Leah how do you ALWAYS find the perfect GIF?!

@lapin_rouge I see your point - the effect of the wine industry on climate change is a very big, very important conversation indeed! There’s some info in one of Jancis’ articles here:

I am not a gambling addict thank god, but experience shows that silent auctions are not my friends, especially if wine is served.

Football shirts dedicated by Maradona and Pele are for sale if anyone is interested, as well as a football signed by the 2010 Arsenal squad…

More seriously, I am quite intrigued by lots 37 and 38, so might put in a bid. It is for charity after all.

Clearly charitable donations do not count as “wine spend” and with careful planning may even qualify for tax relief. Worth a try anyway!

They stood out to me too. To avoid any conflict, should I make a bid, I’ll go for lot 39.

Appropriately, the bottle of Grange, from my birth year, looks like it’s seen better days !

@Freddy (our Australia buyer) wanted to update you all on how these awful fires have affected our growers, but he’s currently whizzing around Austria visiting lots of amazing producers, so he’s kindly sent me an update to post on his behalf:

"For anyone who has been following the news lately, the bushfires in Australia will be no surprise, yet they are no doubt still a heartbreaking turn of events. They have raged continuously since around September of last year and have caused unprecedented levels of devastation. They burn in every single one of Australia’s states and are a stark reminder of the power that Mother Nature has over all of us.

These fires have caused tragic losses of wildlife across Australia and have destroyed the homes and belongings of so many people across the country.

Sadly, there have been stories of wineries which have faced significant losses of vineyards and facilities in these fires as they have swept through the country and whether they are suppliers, friends or colleagues of ours or not, we are still deeply saddened to learn of the tragic events that have unravelled.

I have reached out to our suppliers recently because more so than anything I have wanted to check that they are safe and well and I am relieved to say that I have heard back from all to say that nobody has been injured.

Our own-label suppliers, Bleasdale, say that they have lost some of their chardonnay and Pinot Gris, and Shaw + Smith have reported that the fires burnt up to the boundary of their Lenswood vineyard but no further, which is a real blessing, all things considered.

Thankfully, at the time of writing, all reports back from those wineries that we work closely with have been of lucky escapes and are crucially good news, despite all these tragic events.

What is particularly harrowing though, aside from the unanimous sense of worry and nervousness from our suppliers is how “close to home” these fires are for a lot of people, with one of our suppliers telling me that he knows two of the people whose lives have been taken by the horrendous blazes.

It almost feels distasteful to say it when human and animal lives are at risk but it looks as though this will be a very difficult wine vintage for Australia, with Brokenwood winery in Hunter for example saying that the likelihood of single vineyard wines is minimal this year. The effects of smoke taint across the key wine growing regions is yet to be seen.

I am pleased to report that the damage caused by these fires for our core suppliers is very minimal and that 99% of them have escaped entirely where their vineyards and wineries are concerned, but this type of event really brings to light how insignificant all of this is when human life and the life of so many of Australia’s beautiful animals and habitats are at threat. Although it is our livelihood and often our passion, wine is wine and there are many more important things at stake here. Our thoughts and deepest sympathies are with the families of those who have been killed by these fires and we will endeavour to keep our members informed should we hear of updates from our suppliers.”

Thanks for the update. My husband’s sister lives in Canberra and they are in regular contact. No fire in ACT as of yet, but the air quality is so bad they have had to buy special face masks for when the wind blows in the smoke. Their hobby is rowing on Lake Burley Griffin which is currently on hold, as are their regular camping trips. It’s a scary time out there, that’s for sure.

I dont how much wine Australia Produces in a given year. If the 2019-20 vintage is severely reduced to what extent might that have a knock on affect on general sales. If wine drinkers canot get there Australian wine they will buy other countries wines . Will that cause any sort of shortage overall. We wont know i suupose untill we know how much wine produced. It will have an effect going on because it will take years for the Australian wine business to grow new vines. 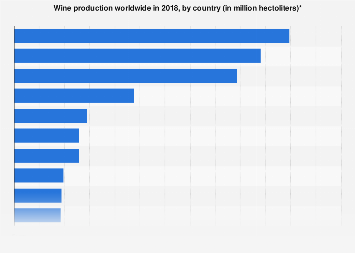 Italy, France, and Spain were the top three producers of wine worldwide as of 2018.

And… it’s LIVE!! Go go go if you want an early sneaky bid in