Pinot noir production in Alsace has changed quite rapidly, and is continuing to develop. As @Ghost-Of-Mr-Tallis says, there are different styles, which isn’t that helpful if you don’t know what you’re buying. Broadly, though, they divide into three.

The second two categories have only really become more common in the last five-ten years. Global warming means that pinot noir is now easier to ripen, and winemakers are developing the skills required to make use of this. Quality is therefore rapidly on the rise, and there are some excellent examples to be had. There does also seem to be a sense of commercial opportunity too - the price has risen rapidly, especially for category 3, and I feel that this can be a challenge to value. Marketing them as an alternative to Burgundy means that you can charge more for them while still making them cheaper than the Burgundian
equivalent, and Burgundy itself is not reknowned for value-for-money. The limits are being pushed in terms of bottle shape - while the AOC stipulates a flute, such wines are often sold in something much closer to a Burgundy bottle.

Another trend which is very apparent is a reduction in the use of sulfur. There’s a lot of experimentation in making unsulfured pinot noir as well as unsulfured riesling. We’ve found this is generally far more successful for pinot noir (I’m yet to have an unsulfured riesling that I’ve really enjoyed), though it rather clashes with the idea of producing wines for ageing. We have also experienced disastrous deterioration of unsulfured pinot noirs which were great when tasted at the producer, and horrible about nine months later. They need to be drunk quickly.

When it comes to producers, my knowledge is a bit sketchy, as until recently we have often not tasted them. Muré does have a good reputation, as alluded to by @Ghost-Of-Mr-Tallis, but when we last visited they only had one available (Côte de Rouffach), and to be honest it didn’t blow us away compared with what we’ve tasted elsewhere - maybe that’s down to others catching up, though. We do buy regularly from Marcel Deiss, whose Burlenberg field blend has always been a far heavier weight and full-bodied offering, quite tannic and needing several years to come round. As an illustration of inflation, though, when we started buying in 2003 this was the cheapest of their vins de terroir - today it’s the most expensive. They do a good Rouge de Saint Hippolyte, too. Rolly Gassmann have long made something riper than average, which is probably no surprise given their house style for whites. Kuentz Bas also make a couple that we really like - oaked and unoaked. Paul Pujol, who is winemaker at Prophet’s Rock, once made wine there, and they seem to have retained his expertise. And there are plenty of smaller winemakers doing great things - for example we’ve had excellent examples from Jean-Paul Schmitt and Vincent Stoeffler. Just up the valley from our house is Albé, which is making a speciality of Rouge d’Albé - a couple of producers concentrating on pinot noir, and they can be very accessible and reasonably priced (though being away from the main route du vin clearly helps, there)

A bit rambling, and a diversion from the main thread, but thought it might be interesting.

thanks Robert
That is really interesting and I will search out some of the makers that you mention.
I have now tasted the Trimbach Pinot noir 2019. I will post notes on the weekend thread along with the 2017 Bourgogne rouge Hudelot-Noellat.

Here we are again. Sunday night and opened another bottle of the CB.
I must say, in a non WSET way, that it is lovely. It really does have that trademark red Burgundy silky elegance with a touch of fatness balanced by lovely fresh acidity and very fine tannins. It is a wine with complex intensity.
The fruit does have real ripeness and the long slightly luxuriant finish means this wine really does punch above its weight.
At £16 it is a dream introduction to red Burgundy. 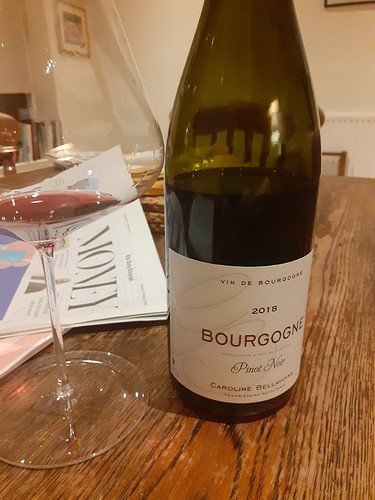 I’ve decided that I should apply to join this lauded group.
So my one bottle is tonight going to bite the dust, purely in the cause wanting to know if I got heads or tails!!

Had my first on Friday, extremely impressive for the price. Took an hour to open up but thereafter lovely, dreamy pinot noir, good mix of succulence and raciness. As good as 35 quid bottles I’ve had, better than some more expensive than that ! A great find in the elusive Chalonnais from Toby M.

You just made me spend some money I shouldn’t have

Just in time. There’s only 1 left

Lucky/unlucky depending on the wine, of course. Fingers crossed for the former

bottle is/ will be “was” completely, and utterly delicious. Kudos @Toby.Morrhall
Just tried to buy some more, sick as the proverbial Norwegian Blue - out of stock!!
Nothing from this Domaine on the EP offer - bereft.

Another one to fondly remember, and to be placed in the file of could’ve, should’ve but didn’t.

Don’t fret too much. I’m sure Toby said that the 2019 is just about to be / has just been bottled. I doubt he would have said that if he hadn’t arranged for one or two bottles to be shipped up to Stevenage. It will be a different wine, but in the same hands and a good vintage… Keep your eyes peeled.

Opened my first bottle of Bellavoine 2018 last night, and absolutely loved it, totally up to expectations. I hope this will be a regular in future lists.

Best I’ve had at this price range for a while.