I think my tastes are pretty similar to yours, Lorri - I started with a very similar list, but with red Burgundy on it too, and over the past year or two have got more interested in Nebbiolo and Riesling (both so delicious and unique) and have largely abandoned NW (apart from South Africa) and Spain as it’s too much to deal with. Personally I like to have a range of things in the cellar but I also like to have a handle on the site/producer/vintage characteristics of the regions I follow and there’s only so much one can keep up with (and drink!).

I have a cellartracker and have now supplemented it with a spreadsheet that allocates wines in the styles I’m after through their drinking windows so I know where the gaps and pinch points are (e.g. I have too much Nebbiolo to drink in the period 2025-2033 and not enough to drink over the next couple of years).

To draw out a couple of other things alluded to above:

Don’t get too seduced by the latest offers, but also buy mature wines. Unless the current vintage is of excellent quality (e.g. Italy 2016, Germany 2019) or the wine won’t otherwise be available it makes more sense to backfill. It probably makes even more sense when you’re starting out to backfill by the single bottle rather than the case. A big proportion of my buying is done by filtering merchants like TWS, Lay & Wheeler, Seckford and Idealwine to show only single bottles from the 2010 vintage and older. The offers for current vintages will appear in your inbox without you having to hunt for them.

Second, don’t buy too many unexceptional bottles - I have too much village white Burgundy and wish I could hand some of it back for the equivalent money’s worth of 1er cru, for example. Although I don’t always succeed, I read on another thread of this type the recommendation to avoid buying anything that isn’t either something you’d be fine to drink at home without a second thought or something deserving of a special occasion like Christmas or a nerdy wine dinner. A related point is not to get sucked in by special offers - don’t buy anything you wouldn’t have bought anyway, because it will sit there using up storage and then counting towards your weekly alcohol units.

Although it’s not the ideal time to implement this advice, another strong recommendation is to drink as much as you can before you buy - merchants’ walkaround tastings are particularly good for this but there are also wine dinners, wine clubs and (pertinently) online tastings to look at. There’s no substitute for drinking and you can then use your findings as the hook to explore further (e.g. a fantastic 2007 Burgundy I had in 2019 ended up with me organising a couple of dinners on the theme, and trying about 20 different Burgundies from that vintage).

Funnily enough I was just looking at some old threads and found a picture of your storage solution! Very impressive!!

I’ve just had a delivery today, so I’ll be there soon unboxing and putting the bottles in their rightful places!

Just a suggestion, pop onto Amazon or Ebay and see if you can get a second-hand copy of Hugh Johnson’s old style Cellar Book that someone has for sale. 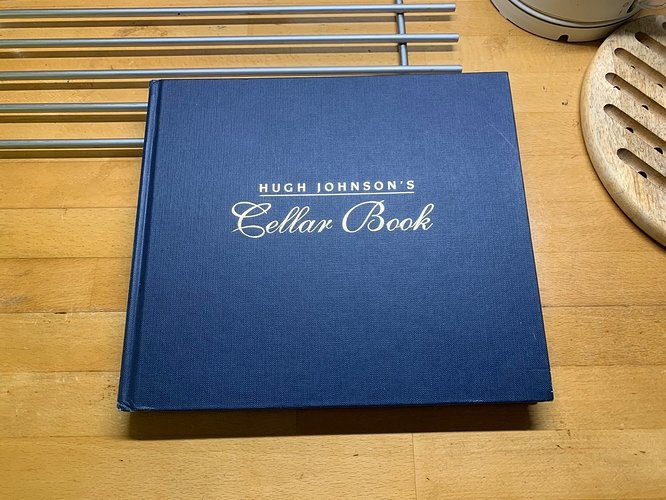 Not necessarily for record-keeping but for the foreword stuff (although there have been some chats on the forum about the pleasure of keeping manual records and notes!). 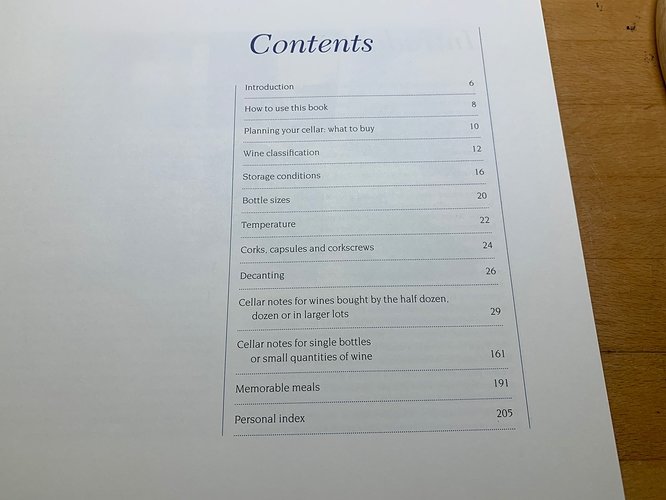 It’s got some great (if slightly dated) advice on building up a cellar and I found it really helpful all those years ago. There are 26 pages of good advice on all sorts of aspects. 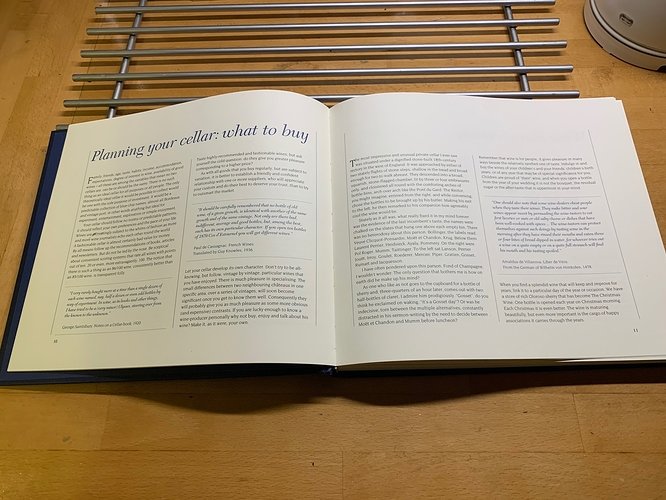 Happy cellar building and hope this helps (and the advice may be somewhere else on-line of course with things like his and Jancis’ World Atlas of Wine).

I’d love to read those 3 pages on decanting!

Find a tasters/drinkers on the forums or professionals who’s tastes coincide with yours and follow their suggestions. There are a lot of highly regarded pros who rave about wines I just don’t like.

Don’t be too precious or overthink stuff (says me!) I have often found the random and serendipitous very rewarding. And you can usually flog stuff if you decide it really isn’t for you. 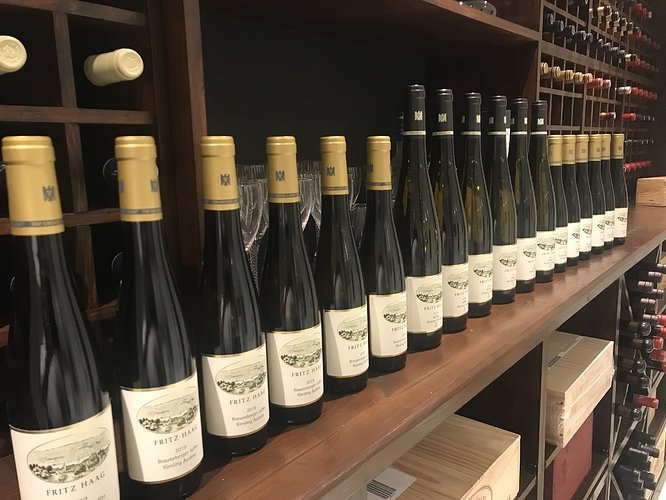 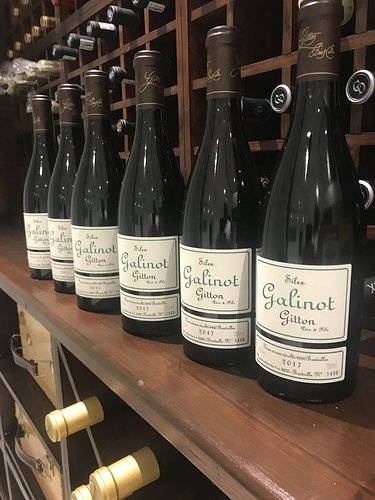 Just a little bit of riesling and this very interesting Silex Sancerre. Made by Gitton who was apparently the inspiration for Didier Dagueneau.

The one thing I’d add to everyone’s excellent advice above is to start as soon as you can, it’s a bit like planting a tree. You already know wines you like start adding them to the collection so you’ll be closer to the point where you can take them back out.

cellar size - double what you thing you will need

wine - buy a minimum 3 of everything…nothing worse than living something to realise you only had one bottle!

12 posts were split to a new topic: Sensational Shiraz

I think there has been a specific issue with it judging by the number of poor reviews and common theme. I’ve tried it twice, and it’s ok but not memorable. A PN for under a tenner usually isn’t.

The Chardonnay is a good, and good value wine though. I have several bottles of the Estate Chardonnay as well as the single vineyard wines. I would suggest not drinking them too early.

On more general themes, a lot of good advice above. When younger, I often bought by the case of 12, and I’m generally happier buying 6s now. 3s are too little if you know you like the wine.

Once you find regions and styles you like, ask around for views on the best, and best value producers, who can produce reliable wine in most vintages. We all have our favourites on here. You can then build up a vertical array of wines over time, for those which age well and enjoy them over time.

One other strong recommendation, don’t commit infanticide on wines. I did this when I was younger. In many cases the wine was fine, but would have been much better with some more age. Again, take advice on here or elsewhere…Cellartracker reviews are good if used sensibly.

As others have mentioned, don’t be sucked in by the annual ‘hype’ of some EP. Another one will be along later as they say. In good years, buying so called ‘lesser’ wines from reliable producers can be quite a cost effective strategy.

Storage - I bought a pretty large ageing cabinet a few years back, and it is permanently full now, with about 4 cases of ‘hangers on’ stacked outside it waiting to get in! Plus about another 150 bottles in merchant storage. I try to leave the longer maturity more expensive wines stored there until they reach or approach the drinking window then take delivery. However, it doesn’t always work out…

This may not be applicable for everyone but I would add, taste widely and build a diverse collection. I have way too much Bordeaux blend in my cellar (as a proportion - quite happy with the absolute quantity :P), and virtually no Rhone/white burgundy which I now regret. I used to be really into Bdx (and still am), but now find that at different times of the year, and on different occasions I feel like something specific, and unless that something is Bdx (or possibly Pinot Noir), I’m stuck getting something in.

Ha! We clearly have made the same mistakes, even down to the quantity of wine purchased. I’ve bought a lot of Bordeaux through BI Wines, and I think I might use their Live Trade to move some of it on.

Last purchases I’ve been buying 6’s and the very occasional 12.

Really enjoying this thread @LorriT1810 I have more to learn from this thread than to impart to it, but a couple of observations from my own experience, having, from the 2012 vintage, started moving to a ‘buy & mature’ approach from a ‘buy, consume and replace’ approach.

I’ve simplified a number of things here to illustrate the point - the maths, no allowance for drinking window (which helps massively with variety), different formats, different vintages and changing tastes. My buying profile is also different to my simplified example above

This thread has been a good prompt to review and flesh out my cellar strategy. I could use a bit of a distraction / break from work tbh.

I’ve got some rough guidelines (get red burgundy whilst I still can, focus on wines that improve with age) and I’ve updated my approach last year (move to longer drinking windows) but I think it would be helpful to put some numbers around my consumption and plot out what the coming decades could look like.

I don’t want to take all of the spontaneity / chance / fun out of things, but it seems sensible to check that the direction I’m heading is where I think I want to be.

I like L&W because for example on Bordeaux EP, i can pick up two bottles each of say six wines, every vintage if i want to.

I so wish I could do this with TWS EP buying. Being the only wine drinker and not a very heavy consumer at that I really don’t want to buy more than about 4 of any one wine in any one vintage. I want the variety instead. One day maybe!

I must say I would love TWS to offer an ultimate EP offer as an alternative to the VCP.

I was thinking something along the lines of 36-54 wines with a target ageing profile of say 10 years. Absolute classic examples from each region so you had 2-3 bottles of each wine.

You could even offer 3 different price brackets and either pay at the start of the year or monthly like the VCP.

Think of it as a mixed case across varieties. Bottles that you want to buy year-in-year out and be the base of your cellar. You buy it at the start of the year before prices come out but basically guarantee a selection at the start of the year (which hopefully would help TWS negotiate better). You could then top up with regional favorites in the main EP campaigns.

I’ve really enjoyed having extra spreadsheets to nerd around with in between work (my work doesn’t involve spreadsheets, incidentally) - so aside from CT (where all my wines are logged) I have one that allocates my wines between categories and likely years of drinking, so I know where to target and have something that stiffens my resistance on all those tempting Piedmont offers, one that allocates what I want to have at home and thus helps me decide what to pull from storage when I have gaps, and another that lists what I think I’m missing for near-term drinking so I can absolutely prioritise those areas (current targets are mature red Burgundy, mature Riesling and dessert wine).