I’m going to the Stevenage Vertical Masterclass on 17th October and was wondering if anyone else is booked?

I would add that it is sold out!

I attended this masterclass in Stevenage last night (my first with TWS) and had a fantastic time! And figured I’d copy the TWS notes plus a few scribbled notes from Tim’s talks and some of my own observations.

We were privileged to taste three vintages from four top Bordeaux estates, one St Emilion and three Margaux. All are really out of my budget but I love the second wines I have tried (repeatedly) from two of them. The wines have been hoarded by TWS for a number of years awaiting an opportunity such as this. Not all of them were actually ever on the TWS list, though a good few were.

Tim introduced each estate with a bit of history and terroir and then talked us through tasting the three vintages from them. In each case we tasted the youngest first and oldest last. One aspect I found extremely interesting was Tim’s interest in the historic and current prices. Inevitable as a buyer I guess, but he was clearly unhappy with how the prices have been inflated in the last 10-15 years. It was also interesting to note the different grape mixes employed by each estate; which were not always what one might initially have expected.

The four estates and their vintages were:

One or two general observations:

Unfortunately (or fortunately) many of these wines would be quite difficult to get now.

As I normally only have one glass of wine in the evening, drinking (and I did drink this time as I wasn’t driving and it seemed a shame not to) 12 glasses, albeit small ones, through the evening may have left my powers of observation slightly diminished by the end!

I have posted the TWS notes for the tasting and added my own notes. My notes are in italic TWS background notes and notes from Tim’s talk are not.

It was a great, fascinating evening, and although many of the wines were lovely or at least promising to be lovely, for me the second wines, Baron de Brane and Segla, offer less waiting and much better value. Which is probably a good job as these are really well outside my budget (at least today). Tim was great; insightful, patient and honest.

At the end everyone did a quick show of hands for their favourite of the evening and interestingly there was a pretty even spread across the different chateau.

This Saint-Emilion property has long been recognised as one of the best in the appellation and is a premier cru with a history of fine vintages. It is believed the winery was named after Jacques Kanon, the naval officer who bought estate in 1760.

In 1919 it was purchased by the Fournier family, who owned the property until 1996, when they sold it to the Wertheimer family, owners of Chanel and of Rauzan-Ségla in Margaux.

Unfortunately, by this point, Canon had some serious problems: the cellars were contaminated with TCA, the chemical compound which causes cork taint. Many of the vines, infected by viruses, were in need of replacement, and part of the vineyard above the quarried cellars had subsided. Fortunately the Wertheimers had the means to address these issues, the will to do it and a manager, John Kolasa, with the know-how.

The first decade of the 21st century saw Canon begin to regain its reputation, and now that John Kolasa has retired and been succeeded by Nicolas Audebert at both Rauzan-Ségla and Canon this trajectory will undoubtedly continue.

Canon is defined by silky texture, fine perfume and body. It can be enjoyed for between eight to 25 years after the vintage.

I used to much prefer right bank but recently I seem to prefer left bank. These were good but I seemed to expect more for the price.

This second growth Margaux property was bought by the Lurton family in 1925 and inherited in 1956 by the far-sighted Lucien Lurton, who was recognised as one of the best vineyard managers of his day.

In 1992, he passed the reins to his son Henri, a trained oenologist, who set out to raise the quality higher still by lowering yields and using greater selection

Brane-Cantenac is a true Margaux, with the accent on charm and fine supple texture, though not without power.

I figure these need time, by far the best for me was the ’96. A little worrying since I have picked up 3 2018 EP; looks like it might be a long wait!

In 1661, this estate was bought by Pierre Desmezures de Rauzan, who named it after himself. Over the next two centuries it remained in the hands of his family, who maintained its high reputation, so much so that it became a favourite of Thomas Jefferson.

In the 1855 Classification, Rauzan-Ségla was placed top of the second growths – just after Mouton-Rothschild, which has since been promoted to a first growth. In the 20th century the property passed through a series of owners and suffered seriously from underinvestment, but this changed when the Wertheimer family, bought the estate in 1994.

They recruited John Kolasa, previously manager at Latour, to run it, installed proper drainage and embarked upon a considerable amount of replanting. After 20 years of improving the estate and the wines, Kolasa has now been succeeded by Nicolas Audebert, formerly of Veuve Clicquot and Cheval des Andes, the Argentine ‘grand cru’ established by Château Cheval Blanc.

Since the early part of the 21st century, Rauzan-Ségla has re-established itself as one of the finest wines of the appellation alongside Margaux and Palmer.

The 2001 was probably my favourite wine of the evening. I could even consider that £93 price tag but probably not!

Although this Margaux estate existed in the 18th century, it didn’t get its name until 1814, when it was purchased by General Charles Palmer. A veteran of the Napoleonic wars, he was a man with a reputation for fast living, and this lifestyle ultimately led to him being forced to sell the property in 1844. It changed hands twice in the decade leading up to the 1855 Classification, giving neither owner time to make the changes necessary to fulfil Palmer’s potential, and so it was awarded third growth status. Despite this classification, its track record and now its price, place it higher than the second growth Margaux châteaux, and between the years of 1961 and 1979 it made consistently finer wine than first growth Château Margaux.

Palmer’s reputation was established in 1938, when it was purchased by a consortium of Bordeaux negociants: Mähler-Besse, Sichel, and Ginestet. Today there are 24 shareholders, most of whom belong to the Mähler-Besse family, with Sichel owning one third, and Ginestet no longer directly involved.

The 1996 almost pipped the 2006 Rauzan Selga but not quite. So looking at the prices I guess my palate is just not sophisticated enough!

What a great event. Looks really well structured with 4 Estates across several vintages.

The price inflation whilst I guess not a surprise, is scary when you list it across all the wines.

Thank you for taking the time to post these notes.

Sounds like a brilliant event. Must have been fascinating to taste different vintages of each of those wines. Thanks for reporting 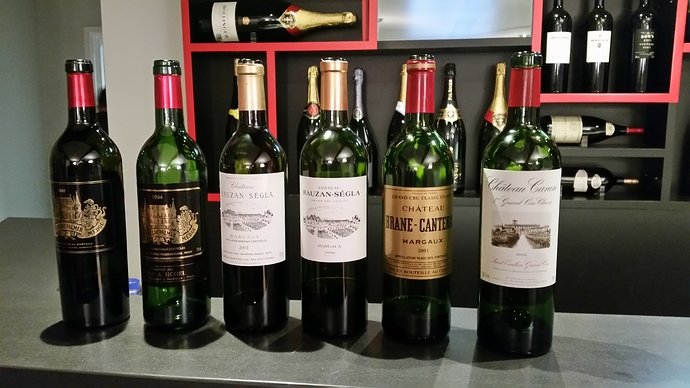 Yes, wish they’d been photos of wines I owned!

Great stuff, Mike! Sounds like it was a fab event, and such a privilege to try these older wines and have the opportunity to compare their evolution. Lovely that you had Tim to guide you, too!
Thanks for posting!

It was but the remarkable thing is how many of them still seemed very young now. I guess that’s one of the differences between first and second wines!

Thanks very much for sharing Mike, I have some Brand, Rauzan and Canon from more recent vintages squirreled away so really interesting to see what people thought of the more mature vintages. Ch Canon is right up there with my favourite wines I have ever tasted along with Pontet Canet so I am quite jealous

I don’t think I’ve ever had so many tastes of such expensive and lovely wines in such a short period of time. Even the ones I appear critical of are only relative to the others being tasted.

So yes I was very privileged! It wasn’t cheap at £95 but then that is probably less than the average current market price of all the wines and twelve small glasses makes that, when combined with Tim Sykes’, guidance fantastic value.