And we are off! Bin 007 “coming soon” according to TWS Insta. What do we think it could be?

Why? None of the others have been offered in bond.

or a weird blend by Angelus (as featured in Casino Royale) https://www.jamesbondlifestyle.com/news/château-angélus-pays-tribute-james-bond-007-limited-edition-wine

or a still red by Bolly

or possibly a (bow) Thai Syrah

apols…ive been on zoom calls all morning !

Looks like some people have been waiting since bin #001 to crack out the 007 jokes! Very quick off the mark

To go with the 007 theme, some sort of vermouth, surely.

Something from Spy Valley? I’ll get my coat…

I wonder how soon is “soon” 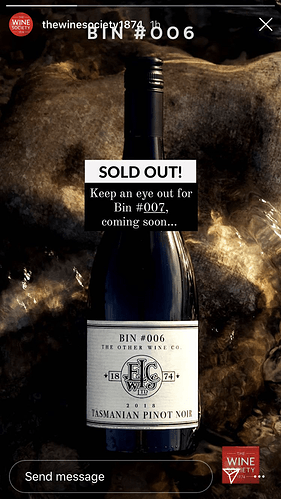 Well, duh! Shows I wasn’t firing on all cylinders this morning! Apologies @johnmc

If No. 007 follows the same line as the rarity of an Australian Pinot Noir, then it’s probably a California Cabernet.

Track record suggests that it’ll come from a supplier that TWS currently works with or regularly works with, and that after it appears in the Bin label further vintages will appear on the main list under the winery’s own label

“ …vintage Three Cape Ladies, a red blend from Muldersvlei in the Cape. Bond knew its reputation. He took out the cork and poured. They sat on the sofa and sipped. “Wonderful” he said.”

So there’s a 007 connection with a Warwick Cape Blend and they may well make one in the future, and TWS have had a long running relationship with Warwick

I was going to suggest a 100% Cinsault wine.
Given the plethora of terrific vintages in Southern France and around the Mediterranean as in Morocco or Lebanon of late, maybe a producer with an odd foudre of tidy wine might be persuaded!!
Yes, I have noted that this has been done before, but is relatively uncommon and if say, the Perrins, the Guigals or the Hochar’s could be persuaded, this might be a cracker!!