Well you lot, it looks like we’re all going to be banged up and driven mad by either working from home or social isolation, so we’re going to need some entertainment!

So let’s hear everyone’s best wine story. It must be true (honestly no fantasies please) and can be good, bad or just plain silly. Go for it!

Mine is being written as we speak in case anyone asks.

In 1982, a friend and I spent a week in the Medoc visiting vineyards (usually three or four a day), changing in and out of decent clothes daily and sleeping in a tightly packed Triumph Acclaim car overnight to save money. Early morning warm water shaves (courtesy of a primus stove) using the wing mirrors to make ourselves presentable for a 9am start each morning.
One afternoon, one of the highlights of our trip was to be a visit to the fabled Chateau Mouton-Rothschild, including the museum, for which we had written specially. Upon arrival, we were asked if we wouldn’t mind waiting a short time for an American visitor who had become delayed; naturally we agreed.
A short somewhat chubby man in a white suit, reminiscent of Boss Hogg in ‘The Dukes of Hazard” eventually swerved into the entrance in a hired Volvo and perspiring heavily, clambered out to join us, apologising profusely.
It is important to remember that at this time visitors did not get, or expect to get a tasting at the chateau. However, we had the full visiting experience and were (the three of us) left alone in the museum to view the exhibits.
Our American ‘friend’ immediately sat down and removed his shoes which by all accounts were killing him, he said. ‘These are Church’s and incredibly expensive’ he moaned, wishing he had worn a more comfortable pair for his trip.
We were to further learn that the gentleman in question was one Leigh. F. Knowles Jnr, the President of Beaulieu Vineyards in the Napa Valley, California, who incidentally in a former life had played trumpet, as a young man, in the Glenn Miller Band.
Subsequently our guide returned and a restored Mr Knowles and ourselves were shown into a room where the Mouton Rothschild winemaker, the late Raoul Blondin arrived, together with M. Cottin (a Director of MR) with a tray sporting three glasses of CMR 1981 from the cask.
Naturally we deferred and took a step back thinking that the three glasses were for our esteemed fellow visitor, the winemaker and M. Cottin to taste. Seeing this M. Blondin asked, ‘What’s the matter, don’t you want to taste it?’
Later that evening, in our scruffy clothes, sitting in our folding chairs, next to the car at the bottom of Chateau Beychevelle’s back garden, with a baguette, cheese and a glass of Cotes de Blaye, we both looked at each other and asked, ‘Did that really happen?’.
As part of the exchanges, Mr Knowles invited us over to the Napa to visit Beaulieu Vineyards whenever it was convenient to do so. Sadly, he died at the age of 78 before us two impoverished young wine enthusiasts could rustle up the money to travel to California. 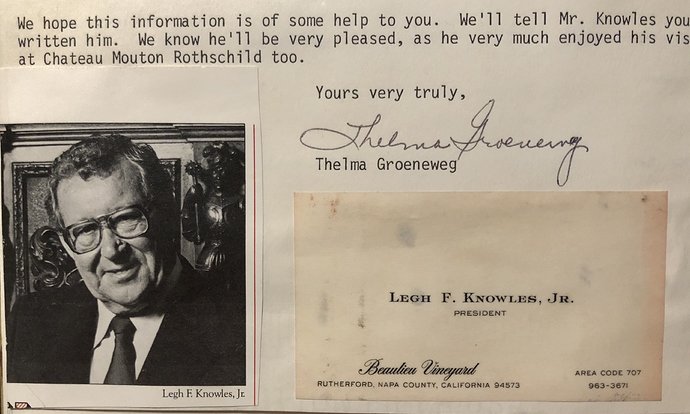 I had a similar experience some years ago when a friend and I were visiting vineyards in Burgundy. We went to a cellar in St Aubin and were asked to wait for a while as they were expecting a regular client who was the sommelier of a Paris restaurant. As a result we were included in his tasting in the cellars and were offered wines that would not normally have been shown to Joe Bloggs.! We did buy a couple of bottles before leaving but the Parisian gentleman ordered several dozen cases!

Yes! More of this sort of thing. Going to be doing a lot of vicarious living in the next few months.
You set a high bar with your story AnaGram. I had a very happy whisky experience about 10 years ago. At a friend’s wedding in an Oxfordshire country pile. The venue had a small bar off in the west wing which only stocked whiskey. Naturally I wandered in around 11pm to find it was just me and the barman. He was skilled at his job and persuaded me to purchase a dram of Ardbeg uigeadail. A lot more than i would normally spend. Having poured my measure he placed the open bottle on the bar and promptly left the room. Requiring no further instruction I filled the glass to the brim and rejoined the party. I seem to remember dancing elegantly and dazzling all with my witty repartee for the rest of the night. The whisky was delicious.
Now the uncharitable may say the short version of this tale is “you stole booze and got drunk” but that version has no soul.