OK I know it was in 2020, but last year was Beethoven’s 250th birthday.
Did any members make a point of listening to his music? Most concerts were cancelled so home listening came into its own.
Do any members feel that his music lifted them during such an awful year? If so were there any particular works or recordings?
Did any members play any of his music? I am thinking mainly pianists.
I did listen to most of the well known late works. I still find the late string quartets a real challenge.
I have over the years found Beethoven’s music to be a great companion during difficult times. He just never lets you down.

I really like Daniel Barenboim conducting the West-Eastern Divan doing the symphonies.

I think I like this more than other recordings because I saw the proms they did of these in 2014, which were among the best I’ve been to. I was still in academia at the time, we used to organise meetings at Imperial on days when there were proms we wanted to see so we could get into the queue quickly.

There were lots of tributes on Radio 3 last year which is my usual breakfast audio so that was nice. No access to piano atm so I miss messing about with the sonatas.

The last concert I went to before lockdown, in March, was the RFH recreation of the mammoth 1808 concert introducing Symphonies 5 and 6, Choral Fantasia, Piano Concerto 4, plus various others. That memory has helped.

Did any members make a point of listening to his music?

I’ve always had hearts for the Pastoral (especially after discovering Celibidache’s take a few years ago) but this year I’ve rediscovered the 7th. That bit in the first movement, three or four minutes in, when it quietens down and the flute gently beckons you in with that melody, and then BAM, they’re all at it and you feel utterly alive.

One of the finest moments anyone could ever conjure.

First of all apologies for my thread appearing in the sports section! Not sure how I managed that.

I have found the late quartets very difficult to get to grips with. Their sheer size and scale dwarf any other writing in the genre. Also the juxtaposition of mecurial ideas and long phrases is mezmerising.

Yes, the section in the first movement of the 7th Symphony where the flute tip toes into that main theme is quite extraordinary. Beethoven was a composer of incredible economy and concentration. He was able to take a tiny rhythmical fragment and work into a whole movement.

Despite going to many Celibidache concerts I never heard him conduct Beethoven. The only disappointments I had hearing Karajan was when he conducted Beethoven. But Thomas Ades conducted a wonderful Beethoven 9 in Norwich 18 months ago.
Other great live Beethoven memories were Michelangeli playing the opus 111 in Bregenz in 1988 and Gilels playing 4th concerto way back in early 80s.

I moved it for you.

For those that do not (or even do) know Beethoven’s 7th well, I would recommend the BBC Proms concert from 2020. Its a bit of an exploration into the piece before playing each movement. I won’t say much more here but there are themes/ideas running through the whole symphony that I haven’t really noticed before until it was pointed out.

Thank you Tom, my technology skills are sadly lacking!

But what is the point of the sections? Except when I have to start a topic, I never take any notice; I just look at the headings. They all seem to have very porous borders. Just scrap them?

Concerts missed
Krystian Zimeman / Simon Rattle / LSO Piano Concertos at the Barbican in December, performances cancelled and rescheduled multiple times but missed out on the final balloted ones😢, still DG issuing recordings this spring.
Listening to:
Igor Levit - Complete Sonatas
And Jean Efflam Bavouzet - The Beethoven Connection is an interesting insight into other composers music at the time.

Yes, I also missed out on the Barbican concerts. I hope you listened to Levit at the Salzburg Festival during the summer? Exceptional.

Not my place to scrap but one benefit of categories is that you can mute topics you aren’t interested in - sports for example.

I never read the things with sports headers, but I would have missed the Beethoven if I had muted the category. Just scroll past the topics you aren’t interested in. Don’t let someone else edit what you see.

Don’t let someone else edit what you see.

Good news is that you don’t need to mute anything, so you can view what you like. Other people might find it useful to search the categories. Or mute them. Or bookmark them. Or whatever else. If they were removed, we’d all have to browse the way you like to browse, and other options are removed.

I listen to a lot of Paul Lewis playing Beethoven

After attending this concert:

This week, Bernard Haitink returns to the Chicago Symphony Orchestra to lead Bruckner’s Symphony No. 6 and Beethoven’s Piano Concerto…

I became quite taken by his very playful approach to Beethoven.

I missed them as well but will listen to the Levit Salzburg if still available.

Well I have been learning a sonata I have loved forever but never practiced, Op 109. It wasn’t particularly because of the celebration, more the fact that I hit 70 and thought I’d better get a move on! It is a seriously wonderful piece that said and I wish I’d got there a long time ago.
I did however buy a new edition of the complete sonatas edited by Barry Cooper on the back of the celebration. It is an Urtext version and ABRSM should be congratulated on publishing such a clear and well documented edition. 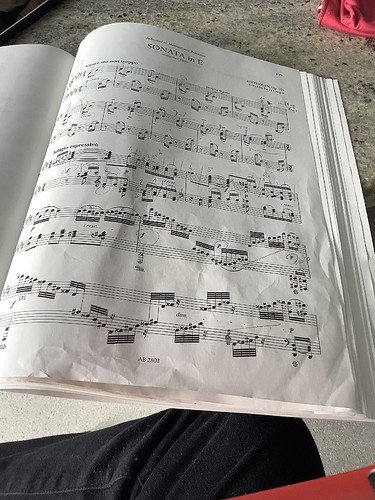 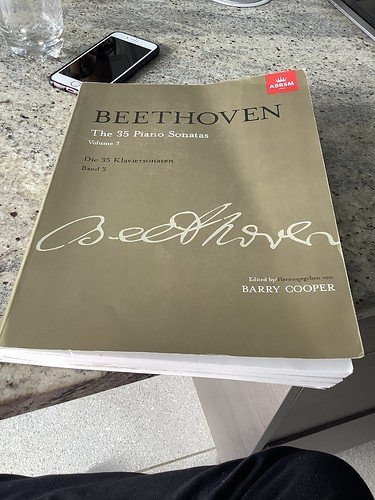 Despite going to many Celibidache concerts I never heard him conduct Beethoven.

They must have been amazing. Not the same, of course, but I am certainly glad that he lives on in Youtube.

There’s a lovely statue of Beethoven in the Münsterplatz in Bonn. They’re very proud of their local boy.

No missed Salzburg, hopefully we can get back to the concert hall in September.