Prompted by this thread - this evening opened a Roilette 2018 Fleurie, with venison steak and champ. The Roilette at this stage in it’s maturity is absolutely in the ‘good with food’ bracket, short finish and very tasty, VERY Fleurie.

In reference to the original post, I imagine it would be superb in another 10 years - but it’s in my glass tonight instead. That’s the problem & the great thing with Cru Beaujolais, they are so drinkable early on.

Wonderful, Andrew, and more than you might have guessed. I had a TLB MaV a few years ago, one about the same age (though not the Rouchaux, I think). Slightly guiltily, as at the time a sleep coach was with my wife putting our son back in bed for the 100th time!

Anyway, the wine was wonderful, and so Burgundian. If I’d imagined that to make Beaujolais Burgundian you had to age it until it was fully resolved, and this challenged that notion.

And Nuits-like… yes! Like a very dark fruited Burgundy, and one with excellent balance, really lovely - and on its own terms vs. being like a conventional idea of a Beaujolais. By which I mean, it wasn’t a Beaujolais that tasted a bit Burgundian, as a Cotes du Rhone can taste in some respects a little like a CNDP (as in same style in some ways; not in same class), but rather something that was every bit as enjoyable as a very well chosen Burgundy at the same price (albeit in some ways similar, in others different, but similarly styled).

Your selection looks interesting. Including two of the so-called Gang of Four (Guy Breton, Jean-Paul Thévenet, Marcel Lapierre and Jean Foillard). Though they’re not cheap! But be very interesting to hear your thoughts over time.

And thank you for being kind in sharing your informed thoughts!

Nice thread. Only just discovering Beaujolais. Grabbed a bottle of DOMAINE CHARDIGNY SAINT-AMOUR A LA FOLIE 2018 from Salut to accompany the football last night. It was lovely and far too fancy. Did the clever thing of being concentrated but not at all heavy. Really silky.
No idea if this is typical of Saint-Amour but would buy again. 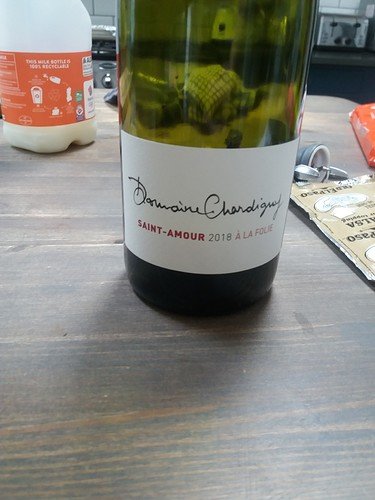 That’s the one that’s only made in good years? I’ll be very interested to see how it fares.

I had a bottle a couple of months ago (I think) - it was a LONG way from being ready to drink at it’s best. Currently all primary fruit, which isn’t a bad thing … however I thought it would be much better with another 5 years minimum.

@lapin_rouge , Many thanks for the tip. In light of that I may see if I can buy one of the older vintages.

Or buy both young and old !

Can’t think of a better way to compare how Cru BJL ages ? One thing you can be absolutely sure of - both bottles will be enjoyable.

Here we are, first cru Beaujolais. A 2019 Fleurie from Julien Sunier.
Left it open for 40 minutes.
Fragrant perfumed and spicy strawberry and raspberry on the nose. Almost a touch of Turkish delight.
Palate, soft and approachable same profile as the nose. But good long intense complex finish. Elegantly light bodied. High acidity but intergrates beautifully with very fine ripe tannins.
Sunier uses whole bunches with blanket of CO2 and then foot trodden!! 28 day fermentation before draining off the skins.
And maturation on lees (unusual) in old 224 litre oak barrels from…drumroll…Christophe Roumier.
Grapes grown biodynamically and winemaking Biodynamically certified as well.
Result is a lovely elegant wine without too many teaces of carbonic maceration.
Mrs Matthews really liked it. And that, of course is the most important aspect of all. 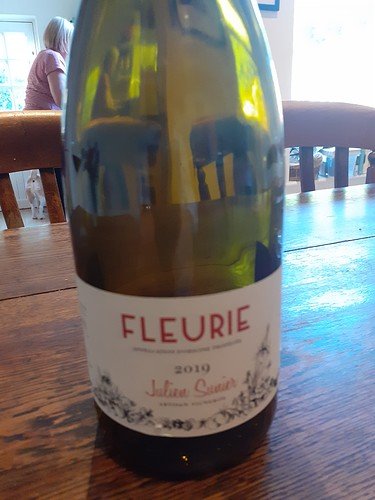 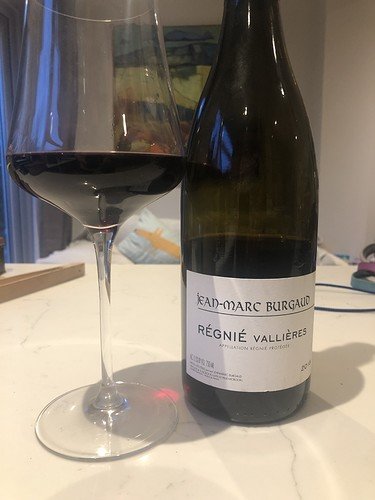 A little more intense than I’d anticipated, but delicious nonetheless. The lively fruit and slight earthiness made it a very pleasurable accompaniment to both curry last night and pizza this evening. Seemed a bit more serious than the 2017 I’ve had previously, but will definitely pick up a bottle of the 2019 if it’s still in stock at my next order.

New Decanter reviews about 180 cru Beaujolais. The ones I bought nowhere to be seen save for the Bonne Tonne which gets low rating. Georges Debeouf’s wines are ubiquitous.
Decanter missing a trick I think. Usual suspects on the tasting panel. Still, at least I can post my own comments without fear of contradiction. Save for the Bonne Tonne of course.

This thread reminded me that it is quite a while since I have drunk Beaujolais, so I opened this at the weekend. Good body, smooth and plenty of flavour. Went well with roast pork. Certainly good value.

DUPCOPY From a vineyard bordering Moulin-à-Vent the wine has the perfume of a Fleurie and the body of a Moulin-à-Vent. This part of Beaujolais was badly hit by hail in 2017, but thankfully quality wasn't affected, and this delicious wine has fine, silky tannins and exceptional balance.

At the end of this bottle there was, to me at least, quite a lot of sediment for a 2018. Photo below, probably double that in the bottle.

Is this typical for Gamay or is it down to the winemaking (fining & filtering)?

James
The winemaker’s website is “under construction” so I could not see what he would have to say on his spec sheet about vinification.
So, my thoughts are that as there are two main causes of sediment it is more likely that the cause is that the wine was not fined or filtered so there is a deposit of dead yeast cells, bits of skin and flesh etc left in the wine at bottling. makers leave those deposits because they believe that to filter them out reduces flavours and character in the wine.

The second cause is that sediment develops over time as a result of phenolic compounds turning into tannin polymers. Gamay is thin skinned and low tannin so two years in bottle is far too short a period for that type of sediment to develop. It usually takes 5-10 years for such a sediment to develop.

Thanks Andrew, I thought as much, but don’t remember the 2017 having the same.

Is the 18 drinking well now? I thought I saw somewhere it was a bit early but I might crack one open soon if so.

@Leedsmedic 2018 can probably be drunk now but will no doubt evolve and improve over next 5 years.

Photo below, probably double that in the bottle. 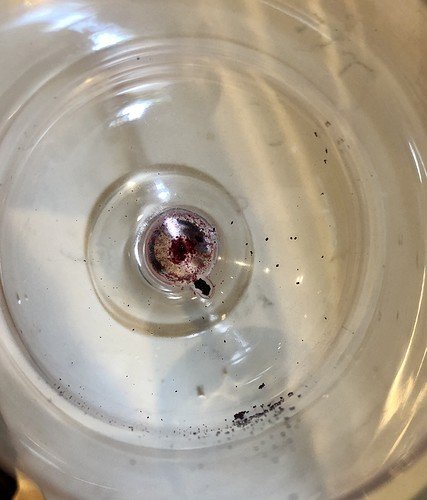