Right on cue these arrived today - two red and one white, none of which I know anything about: 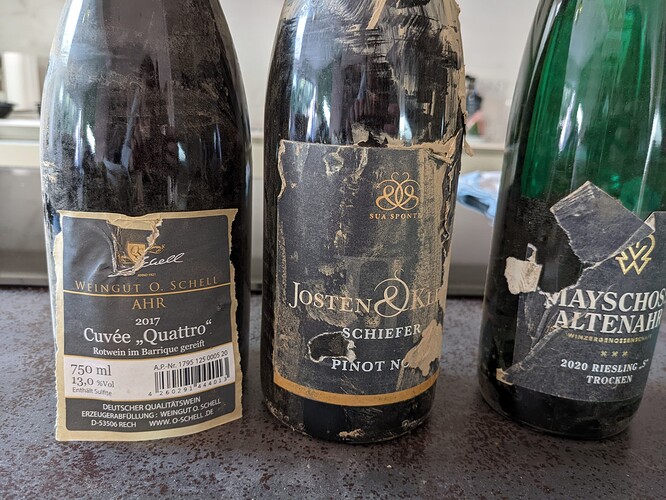 Pretty sure I should have received six bottles but very pleased to have these and looking forward to trying them.

Thanks @PHarvey for all the updates and persistence, I’ve a feeling we might not be getting these at all were it not for your gentle pressure.

I’ve had some good bottles from the Mayschoss coop, so you may be lucky. (But the one in oak would worry me: I am not convinced Ahr wines need it.)

I’m glad to see that the Flutwein is starting to arrive in the U.K. at last.

I was very lucky and due to working and transiting Germany, I received mine last year - around November time - delivered to our crew hotel in Leipzig.

I had the following wines though:

Burggarten - Spätburgunder
Mayerschoss - Rose halbtrocken (variety undeterminable due to label damage)
Dagernova - Domina - a new variety for me, but a cross between Spatburgunder and Portugueser but with tannins that felt like a kick in the jaw with a hint of chewing on grape skin. Whereas my wife didn’t like this, I actually did and have another bottle left!

It’s a very good scheme and I’m happy that some of our money can go to helping rebuild all the wonderful wineries in the Ahr valley.

Right on cue these arrived today

Did you chase them or was in an unexpected surprise?

Complete surprise. I think I did send an email enquiry at one point but don’t remember getting any response.

Encouraging to see some are coming through at last - seems to have been prompted by my last email exchange with Michael Schmidt a few days ago; his reply initially was the he thought they had all been sent and so he needed to chase up the despatching team once again !

But if you ordered 6 and only received 3 this needs raising with them. Can you confirm either way and if need be I will email Michael again.

Finally the letter from Parcel Force advising me of the existence of my parcel in the local depot has arrived. Subject to paying HMRC another £46.50 which I naively imagined wouldn’t be applied.

So that totalled around £170 for a mixed-6 mystery could-be-anything bottles which now doesn’t seem such great value. But I’ve taken the hit and will see what’s been sent. Delivery tomorrow…

@Jimmybob - Mark were yours charged for or did they just get delivered unannounced ?

TOH suggested a stop around Ahr this summer as we travel back from Sweden in order to explore a vineyard or two. I am presuming there is still a clear up job going on? Mosel is perhaps a better idea at the moment.

If you decide on Mosel, you could use the Mosel fine wines newsletter and website as a guide: 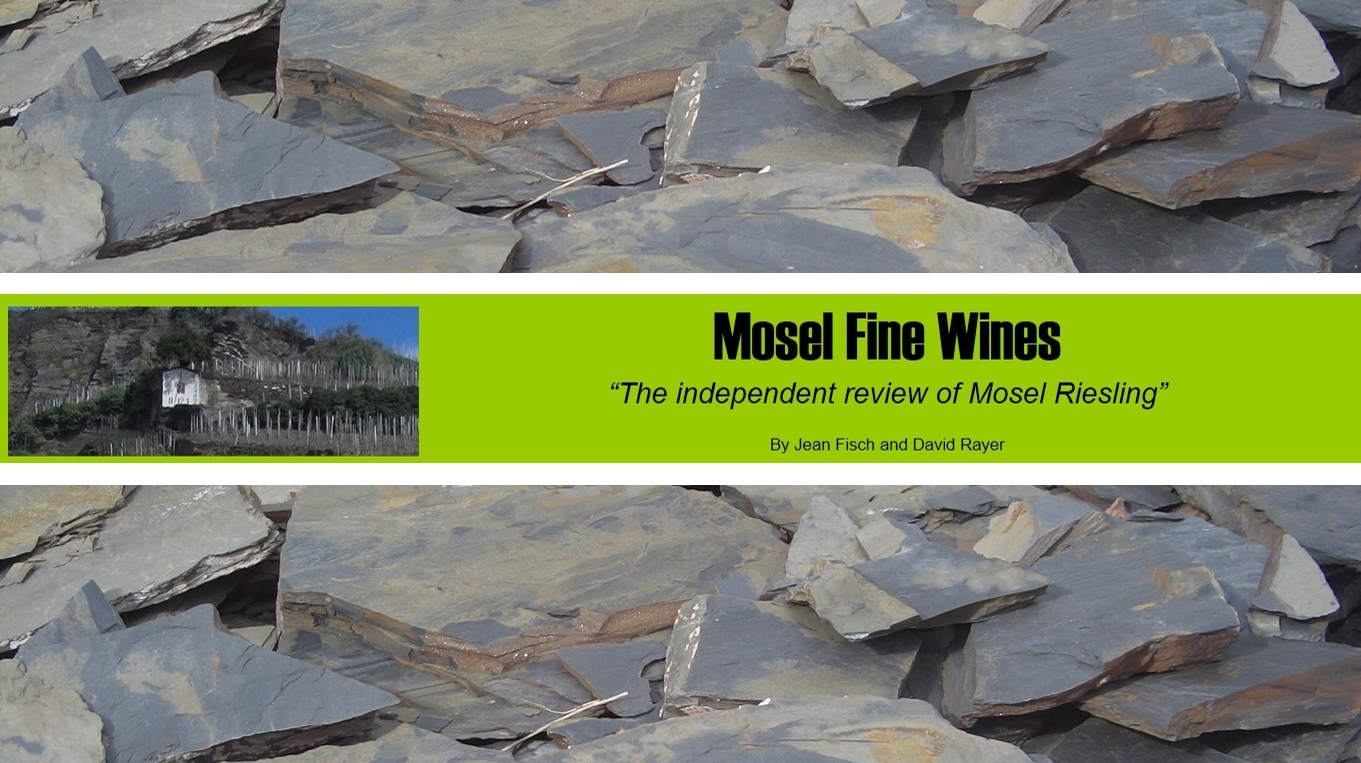 Sorry to hear that. Mine just arrived, no charges applied. I’m afraid I can’t remember who delivered them now, and I can’t find any email notification of delivery details to check - but I’m pretty sure it wasn’t Parcelforce.

Good idea and by coincidence I subscribed to their newsletter today. Many thanks.

I think you’re not wrong there. In an email from Michael Schmidt this week he wrote…

Personally I would like to thank you for supporting the Ahr growers. People have no idea how bad things here still are, the further you get up the valley, the worse. Just met a lady yesterday from Dernau, who, after 5 moves, has moved back into tgeir house in Dernau, but still no front door, and some of the walls are missing. Even in Bad Neuenahr and Ahrweiler the majority of basement flats and shops are still vacant, and building costs have shot through the roof. Beyond Altenahr villages are unoccupied. Many former residents won’t move back.

Useful confirmation, thanks for that. How awful for them.

Just seeing the end of the road on this saga and I’m posting a further update.

Like @Jimmybob (Mark) my consignment was three and not the six I ordered, despite the invoice stating that 6 were sent (and 6 was the tally for HMRC to levy)

By now being fairly cheesed off about this - effectively I’d paid nearly £60 per bottle; the most “valuable” being the O.Schell Quattro Cuvée https://weingutschell.de/produkt/quattro-cuvee-barrique-trocken/ a barrique-aged spatburgunder which retails from their website at €19.90. The other two, like Mark’s, were an entry level pinot and riesling - I expressed my frustration to the flutwein people and they have offered me a complimentary fresh mixed 6, and luckily I have a French post-restante address to which it will be sent this week.

I will also complete form BOR286 https://assets.publishing.service.gov.uk/government/uploads/system/uploads/attachment_data/file/978896/BOR286_-_English.pdf to claw-back most of the tax and duty I was charged for.

So, @Jimmybob , and anyone else still left short-changed from this debacle please contact Daniel Koller daniel@flutwein.de and try and sort something out with him. I am prepared for any of you who needs it, to supply you my French address to have it sent to, and I will bring it back to the UK late September and post it to you from the UK.

I also have his phone number and so message me privately for that if that helps.

Many thanks - much appreciated. I’ll follow up with Daniel and may well take you up on the offer of delivery to your French address. I’ll DM you with progress.