Absolutely NOTHING to do with wine

Any cats about? Neighbours’ cats perhaps?

Our cat (long disappeared) used to bring us semi-live mice and shrews too. It was terrible - I never understood why he didn’t just kill the buggers. What we used to do with those ‘gifts’ from him, was taking them to the back of the house where there are fields, foxes and other such hungry creatures.

If you absolutely don’t want to whack it on the head, poor thing (you/him), then maybe you can dump it in a field. It’ll be dead in no time.

then maybe you can dump it in a field. It’ll be dead in no time.

That should be a song title…

Any cats about? Neighbours’ cats perhaps?

My cat and the neighbours cat just bring us live mice and set them free in the house. They take up residence under the sofa, under the dishwasher etc. She shows no interest in them after they are loose in my house. I’m not sure if this is better or worse than her brother (RIP) who ate them 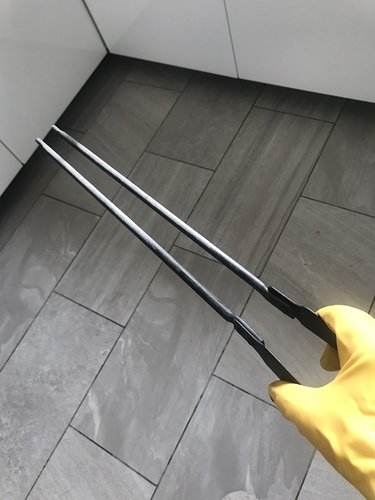 image3024×4032 1.67 MB
Did it … picked up the trap with the fire tongs, took him outside where he/she was still scrambling about … thought I can’t leave it like this so I’ve dropped it in a bucket of water

The mouse police never does its job properly…

Look out, little furry folk!
He’s the all-night working cat
Eats but one in every ten —
Leaves the others on the mat

dropped it in a bucket of water

Ouch! To quote The Waste Land: “Fear death by water”.

But it would have died anyway, so you saved it from prolonged suffering.

Sorry Leah, my post was about cats, not you!

Doesn’t sound like fun, put the kettle on and think of something nice to open later

We catch about half a dozen a year in the garage each winter. Always killed stone dead. Are you sure you’re setting the trap right? Have had to dispatch a rabbit and crow caught in netting at our cricket ground that couldn’t be released.

I just pick the mice up by the tail and chuck them in the hedge at the bottom of the road.

We had a RAT in our kitchen a few weeks ago. Bastard kept setting off taps, getting injured and getting away. Ended up getting someone in, lots of poison and filling of holes etc. Anyway, took days and one night I went into the garden to see that a tap had been set off but no rat, turned around and there it was, cowering in the long grass. Got the trap, set it, and placed about a foot in front of the blighter. Then got a stick and started knocking behind to make it run straight ahead (they are clever but seem to only go in straight lines). After some acrobatic jumping it finally ran straight into… my trap, but clearly broke its back and squealed an squealed. Felt terrible. So terrible that I finished it off with my stick. Then I remembered it had SHAT in our toaster so we had to replace it, and no longer felt terrible.

Then I remembered it had SHAT in our toaster so we had to replace it, and no longer felt terrible.

How did you erm, discover this? And had any toast been consumed meantime? I would have been thinking of that as I clubbed it…

they are clever but seem to only go in straight lines

Probably sick of them lab mazes!

But seriously, my other half would positively puke if he stood that near to a rat! A traumatic residue from childhood, having to retrieve spuds from a cellar full of rats. Well done to you!

Then I remembered it had SHAT in our toaster so we had to replace it, and no longer felt terrible.

, a Rat!! But this is soo funny , sorry bout your toaster

Came down one morning to find ‘evidence’ on the counter, which resulted in full blown disinfecting of everything that was out… a smell test confirmed it, dry retching ensued. I’d prefer to believe that we found the evidence before toast was consumed

Yes indeed. Merde de rat croque monsieur does not appeal…enough indeed to give you the dry boak as Scots say.

Living out in the country like I do and in an old house (pretty much impossible to seal completely) I have mice continuously coming in during the autumn. They seem to mostly enter via the conservatory so I have three or four traps set in there throughout the autumn. Some mornings I’ll come down to mice in every trap! But on average I’ll catch a mouse a day for a couple of months.

However this summer I spotted a couple of rats in the garden and I’m sorry but I’m not having that! So I bought and baited special rat traps (well not really traps just boxes to ensure nothing bigger than a rat can get at the poison). After a few weeks no more rats seen so success. However mice are of course considerably smaller than rats and, guess what, no mice caught in the house this autumn! Result!

And here’s one for @Leah! We used to have a raptor sanctuary nearby that took in injured birds of prey and they were always crying out for mice to feed them. So, on their recommendation, for a few years I was putting the mice caught in the traps into plastic bags and then into the freezer to pass on to the sanctuary when I had a bunch!