A worm at one end

…and a fool at the other.

It’s the wrong time of year, I know, but I thought I’d see if a fishing thread would gather much interest.

You got your first catch :~}

Love it I do, and though less so just at the moment with our boy still quite young, do it a lot I do. Strangely enough, I took him out for a long walk today round a large lake near us, and we found ourselves planning some fishing for the summer.

I’ve done a whole lot of different fishing in different places around the world, and loved the lot; but put me by the River Severn Shropshire end or the Wye Herefordshire end on a summer evening after the barbel - ideally with no other folk nearby I must confess - and I’m in heaven.

I have a romantic notion that I’d like to fish for mackerel from the beach on long summer evenings. Does anyone do this kind of thing and is it in any way as peaceful as it appears in my head?

I’m only really interested in fishing if I am to eat it, and I do not eat river fish (excepting Salmon) ever since living off fish out of Borneo rivers for a few months. I can still taste the ammonia.

I’m a lifelong angler. Mainly salmon, some trout and sea fishing. I find being on the river fly fishing for salmon is the most perfect antidote to a busy or stressful day and is refreshing for body and soul. I am lucky enough to have some fishing less than 5 minutes walk from my house. The rhythm of spey casting down a salmon pool when I’m casting well is good enough in itself…which is probably just as well given the odds!

Coarse fished with my father as a child but as an adult only fly fishing for trout. Apart from a couple of nearby stocked lakes, there is no decent trout fishing where I live so when I have the time, I drive to Yorkshire. I have fished the Swale, Wharfe and Ure but do not go as often as I would like. Always bank on a good lunch and a chilled bottle of Muscadet amongst the reeds.

Went fishing for Mackerel many years ago in Devon. It was sooooo easy it was ridiculous. Cast my line in which had 6-8 hooks on it, wait 30 seconds and pull it out with 4-5 fish on the end!

Gut them, BBQ them, eat them!

Nowadays I prefer Mackerel raw (pickled in salt and rice wine vinegar “shime saba” as it’s called in Japan) and there’s no better source of raw fish than straight out the sea!

Fishing for mackerel with those multihook rigs is not so peaceful in my book, because either you’re casting out & winding them in every minute full of flapping fish, or there is zilch going on whatsoever for hours. Which is of course very peaceful, but not if you’re actually wanting to catch fish and your mind starts fluttering around about how to get them! It’s feast or famine with mackerel really - they swim in huge shoals and they’re there or they’re not there.

To make it peaceful, using a single lure and fishing from the rocks is - for me - the way to go; or slapping out a bait and sitting back to watch the rod-tip if that’s your thing.

Either way, fresh-from-the-sea mackerel eaten as they are or grilled over coals is exceedingly pleasurable. Their oily flesh doesn’t take long to become rather gamey once they’re out of the sea though, which I personally don’t care for so much.

Fly fishing became a part of my life when our son, Martin, displayed an interest when he was about 11 (11 years ago) after watching Robson Green. I organised him with some lessons with a local tutor (had some myself). He loved it. So it was a great “sons and dads” bonding adventure. Our son is adopted and had had a very difficult early life and sadly when he came to us when he was 7, along with his half sister, he had very low self esteem. The fly fishing helped enormously, and he eventually entered competitions and performed very well. He became a member of teams and fished the Anglian water reservoirs. We took him to the Wye, Usk, and thence to Scotland on the Ettrick. He taught himself to tie flies. He has made many great friends through fly fishing, and has learned a huge amount about water, rivers, wildlife and companionship.
I commend fly fishing to any youngster but I was in my mid 50s when I started so my catch rate is very low!

I agree…a great story and shows all the wider benefits too.

My slight concern is that some aspects of fishing are challenging, particularly fishing for wild fish rather than stocked, and it is a long apprenticeship which some kids just aren’t interested in, or give up quickly in this era of instant gratification. I find that taking kids somewhere quite easy helps at first, and then gradually increase the challenge level.

I have one acquaintance who began his fishing career by catching a 35lb salmon on Loch Tay back in the 60s when he was about 7 (with quite a bit of help I imagine!). He said that he gave up because he realised it would all be downhill after that!

Good to see there’s some interest in the topic, and some good stories already.

I used to fish for tiddlers as a small boy, with the occasional sea trip when we were on holiday, but then gave it up until my own children were old enough to show an interest.

That didn’t last long for them, but it’s become a passion for me. I do some coarse fishing on the Wey, and on lakes nearby. I started fly fishing simply because I thought it was something I should learn for when the opportunity arose, and now that takes up at least half my fishing time. There are some good small stillwaters near here, at Albury, but I also fish on the Little Exe and Barle on Exmoor, and some reservoirs down that way now and again.

There are some similarities between fishing and wine as interests, mainly that in the same way that it’s hard to stop buying wine, so you can never have too many flies, floats, and sometimes rods too. ( I hesitate to count the number of rods I own- fly, coarse, sea, spinning…)

It would be great to see some photos of locations where people fish, and prize catches, as well as to hear some of the tall tales we all have. It will all help us get through the coming months until we get out there more often in the spring.

Here’s a starter from me…

River Minnoch in Galloway, in late April/early May 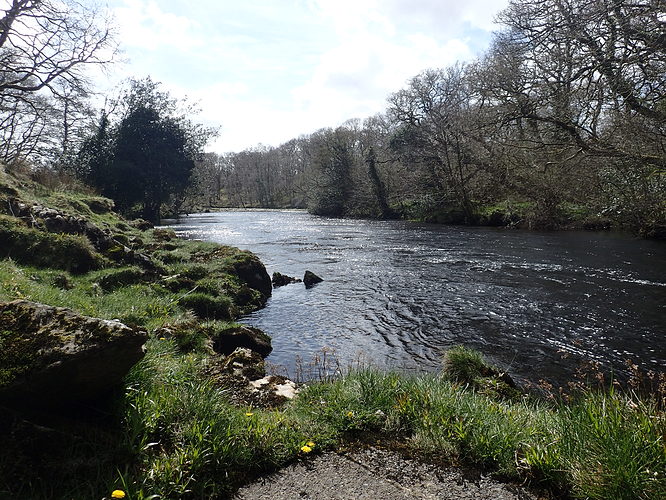 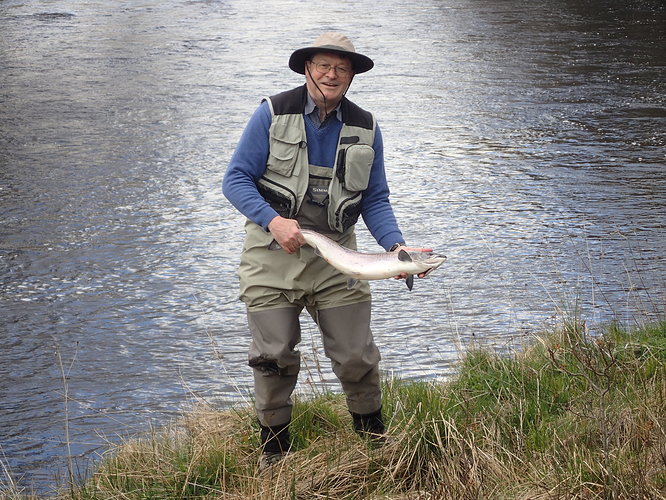 River Doon in Ayrshire - a friend playing a nice fish. 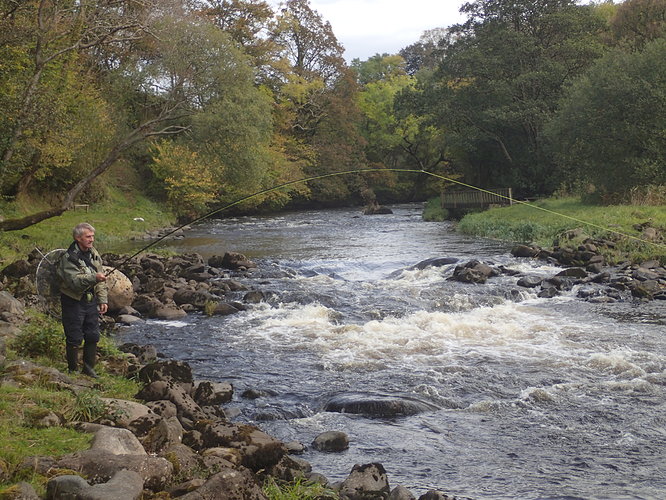 My most local river (5 mins walk), River Irvine in Ayrshire, with a double figure November fish… 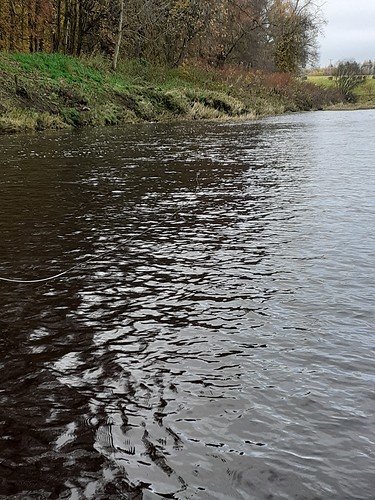 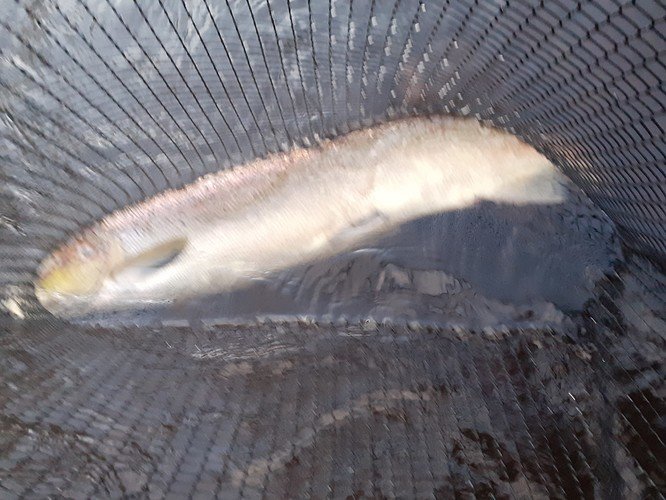 Had a pretty good salmon season in 2019 all things considered, with 12 fish landed and a few lost…good antidote to all the cr@p in the media etc…

Thank you Mark
Youth interest in fly fishing is a difficult subject. I spent some time as a youth development officer for a large Anglia reservoir club (about 18 months). I carefully researched the issue of why youngsters are not coming into the sport. The answer became clear. The first is that amongst the great numbers of parents I spoke to (over 70 in the end) all thought fly fishing was elitist, was for men in their 50s wearing tweeds, with lots of spare cash, and standing in rivers in Scotland. Second, They all thought the sport too expensive and “inaccessible.” When I pointed out the costs of taking up fly fishing compared with other sports they were very surprised
You are quite right about challenges. It is much easier to catch stocked fish in a small lake than wild fish in rivers.
Also, the Angling Trust proved to be a hopeless mess. They were not interested in youth fly fishing at all. They had no policy or programme to encourage youth development. Very sad really.

Up here, it’s definitely not elitist in the main…except the top end salmon fishing. You can get a day’s salmon fishing on any of the three rivers above for £30 or less. A season’s ticket for kids in my local club is a tenner.

One issue is who can mentor them safely…with all the child protection stuff around. I’ve taken various friends’ kids fishing, sometimes with parent sometimes just me, but it’s a bit different trying to sort that for club juniors in a wider sense. I have intervened a couple of times when kids were putting themselves in an unsafe place on the river, or not knowing common courtesy/etiquette, but that’s because there is no one there to teach them.

Pre COVID, our club ran fly tying classes for kids at very nominal cost. However, they lost access to the local authority venue as they hadn’t done a ‘risk assessment’…don’t make me laugh or cry…I learnt by doing and spent many happy days up the local burn trying to catch small wild trout on a worm then a fly. No risk assessment then, but lots of fresh air, and learning.

This was my latest fish of any interest, caught on a stretch of the Wey, where it goes off through the meadows, going round the locks on the navigation.
I was looking for chub (unsuccessfully) with legered luncheon meat, but instead hooked this fish of about 2lb 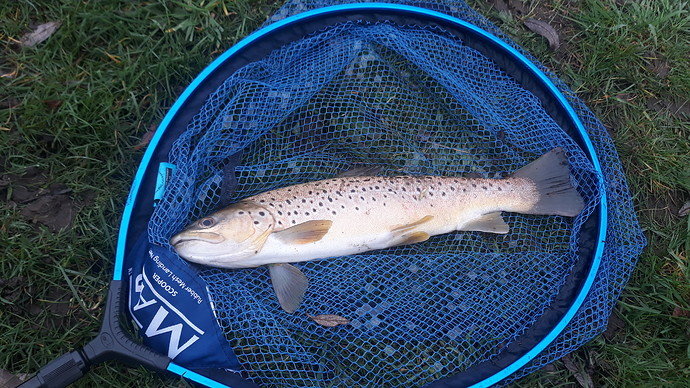 I’d caught the occasional trout in this stretch before but this is the biggest.

That’s a cracker…if it’s stocked it’s a very good quality one. I can almost always tell the stockies from wild on our river by the fight and markings. Sometimes a stockie that’s overwintered can put up a good fight though.

No stocking there, it’s a completely neglected stretch, no more than 10 yards wide. Flows faster than the main river navigation, but still clearly a lowland river.

Would surprise you how far fish can move though…I caught a rainbow in local river last year. Stocking them is expressly forbidden and I reported it to my angling club. They reckon it was an escapee from a small lochan/fish farm which has access to a very small burn about 8 miles up river from where I caught it. Looked a bit like a sea trout when first hooked but fought more like a wet cement sack…

This chaps a good watch…

Great morning. In addition to these I lost a couple, and helped a novice catch one of his first trout. My first sparctic as well (Top of the picture). 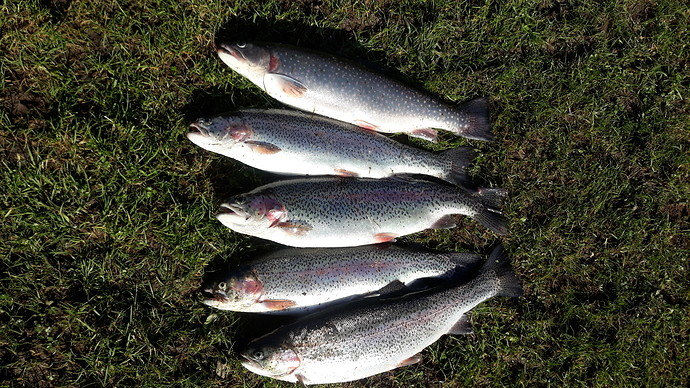