Last night I was invited to a wine tasting with a slightly Macabre, or perhaps ‘Haloweenesque’ theme… Corpse wines!

So for some time now I have kept a very dusty bottle of The Society’s Centenary Crusted Port. I inherited it with a few other bottles of vintage port, which over the years have always seemed less dusty, less leaky, and perhaps just a little more appealing, simply by having a respectable ‘vintage’ label. 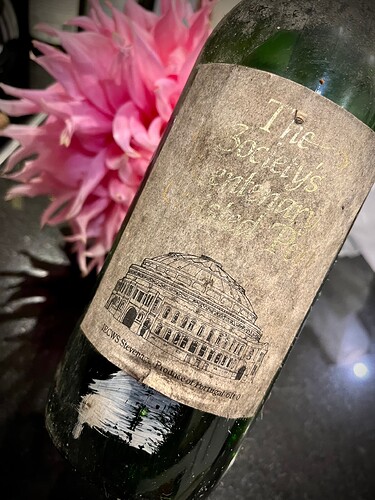 This, like many other wines served - and all very much contra to all expectations - showed extremely well. “Loving your style TWS” I quietly thought, but that was not the end of the story.

On further investigation today, it transpired that The Society’s Centenary range was borne out of a society bottling blip (the full story being in Sebastian Payne’s final word(s) here) with top drawer claret being accidentally blended before bottling, but interestingly l learnt that this ‘lesser’ bottle of Centenary Crusted Port… was actually Fonseca ‘63, bottled in 1970.

Some view 1963 as being the vintage the century, and within that Fonseca being regarded as the best…! Huh, I thought - not such a humble bottling then, but effortlessly hidden away for those who know!

I do love it when that kind of thing happens and especially when it’s got The Society’s name all over it! Thanks TWS!

Are there any other lucky finds out there?

A great story - congratulations! Lucky you and your friends!

I love the idea that the Claret mis-blended by someone called Gould was originally named “Lynch Gould”.

But the story about the Crusted Port sounds odd for a few reasons. Why was this Fonseca 63 not bottled earlier and sold as Vintage Port? Was this another TWS cellar cock-up? And why sell it as Crusted Port? 7 years in cask must have caused a lot of the sediment to fall out so it wouldn’t be very crusted? And wouldn’t it be aquiring Tawny Port notes by then? Anyway I’m pleased it showed well for you, and that is the most important thing

Not quite in the same league, but last year my wife returned from the school fete with a bottle of Domaine Belle Crozes-Hermitage from the (OK but not great) 2006 vintage that she had picked up randomly from the tombola for a minimal contribution.

Now I’m a fan of this specific wine, but its an entry-level cuvee, and in my experience quite early drinking, even in excellent vintages. A bit of research pointed to a drink by date of 2013/14, so even without any consideration of where and how this donation had been stored for the last c. 15 years , I wasn’t optimistic that it would be anything but brown water.

Turns out I was wrong. While it was obviously well past it’s peak, it was actually a really lovely bottle of fully mature, mellow syrah with a bit of black fruit and lots or tertiary notes of leather and tobacco, almost like a really old rioja in some ways. A lovely surprise.

Yes, it’s an interesting question / point Steve. And of course you are right - it was never sold as vintage, nor I believe Fonseca, but simply as a ‘crusted’ port,

So it didn’t help my rather fortunate story, but I did wonder if there would have been a cask pecking order. So, its vintage port, from 1963 and the house of Fonseca, yes, however it’s not The Fonseca 1963…hence its bottling, but of course that doesn’t really answer the time in cask question. Ho hum!

Not really “finds” as such but some years ago Caro and I used to do a weekend trip to France, timed to coincide with les Foires aux Vins in the supermarkets.

Normally went via Ouistreham and thence to Bayeux, this time we went via Le Havre and spent a lot of the budget in Auchan. We then went over to check in at the Hotel D’Argouges, in Bayeux. After a pleasant lunch we went to LeClerc.

The range was amazing, better than Auchan and better than I’d seen before (or since) in LeClerc.

Carraudes de Lafite 02 , Pontet Canet 04, Lafon Rochet 04, Haut Bages Liberal, Prieure Lichine plus numerous others. All around the £20 mark. I can only imagine that the stellar 05’s needed space?!

I filled my boots (& the boot)! Spent the remaining budget and as much again and, frankly, never regretted it. The Carraudes was the only minor disappointment not worth its reputation (& certainly not the £240 a bottle price tag when i drank it). I still have one of the Pontet and Lafon and ,given the quality, only wish i could have afforded more and/or the 2005s.

I see Sebastian’s article did not actually say it was Vintage Port, and I doubt very much that it was in a strict sense (as opposed to it being Port of a single vintage) .

The rules may have been more lax back then, but these days the wine must be bottled within about 3 years (in Porto or the Douro?). Also cask and bottled samples must be checked for quality by the IVP before it can be sold as Vintage Port.

A similar wine to that crusted Port would probably be classed as an LBV now. But I think LBV is quite a recent category, and it too needs to be tested by the IVP.

This isn’t an isolated incident. Many years ago another merchant failed to bottle a pipe of Graham or maybe Warre (1963 or 66 as I recall) which somehow became “lost” in their cellars. It was re-discovered many years later (1980s) and bottled as an “old bottled port”. I recall being at a tasting where the merchant explained it could not be sold as either vintage, tawny or colheita as it didn’t meet the appropriate regulations - by then, for example, vintage port had to be Opporto bottled. Without digging into my cellar books I think the merchant was Peatling and Cawdron at the time it was owned by Greene King. I bought a bottle, and later wished I had bought more, as it was excellent.

I think the main issue would be that a vintage port should remain in cask no longer than 2 years. Spending 15 or more years in cask would surely make it more like a colheita in character. It would still be very interesting to try it.