A guide to Brazil and it's wines

As promised last week, I’ve put together this guide as such to the Wines of Brazil.( @Rafa )
A couple of years back I ran a masterclass on this subject so at the time did quite a bit of research, which obviously involved tasting through a number of different wines styles and varieties.

First off, lets start with a bit of History…:

The mid 16th century saw colonists arrive from Portugal, bringing with them vitis vinifera seedlings which were planted initially around the Sao Vincente area of the South East. Despite the best attempts at growing and producing wine, the Portuguese settlers were largely unsuccessful. It really wasn’t until the Jesuits arrived in about 1626 that saw a boost to Viticulture with vines being planted in Rio Grande do Sul.
The Guarani native community helped to maintain and farm the vines, aiding the religious order in providing wines for their worship.
The standard and quality of the wines being made were still largely unpalatable as the varieties taken to Brazil from predominantly the Azores and Madeira just were not appropriate varieties for the soils and climates of southern Brazil. There was also a lack of incentive to continue growing grapes and limited cultivation techniques employed which resulted in poor quality crops, therefore the decision was made by the Portuguese court to prohibit the sale of wine in Colonial Brazil and forced further production to home winemakers.
By the beginning of the 19th century, the Portuguese royal family made the move to live in Brazil. They removed the ban on domestic production and re-introduced wine consumption as a social act and meal accompaniment .
Some time later, American varieties were also brought to Brazil in order to reduce disease pressure within the vineyards, these were initially planted off the mainland and on IIha dos Marinheiros but eventually spread through the entire Rio Grande do Sul area.

The Italians began to migrate to Brazil around 1875 and most importantly brought with them the knowledge, experience and culture of wine consumption and a motivation to make good wine from the seedlings they brought with them. They had to work incredibly hard to produce good wine as the climate and soils created many challenges for them along with the fact that German migrants has preceeded them and predicably settled on the best coastal sites.
The Italians had to travel inland and over hills to create towns such as Garibaldi and Nova Bassano. They even named valleys after their homelands, ie: Vale Trentino.
Italian is still widely spoken and especially in the smaller towns outside Bento Gonclaves.

There are 6 main wine producing regions in Brazil, the main and most recognisable one being the Serra Gaúcha .Serra do Sudeste and Campanha are to the south, Campos de Cima da Serra and Planalto Catarinese to the North and Vale do Sao Francisco even further North and which sits at a latitude of 9 degrees south of the Equator. (I know…crazy…!) 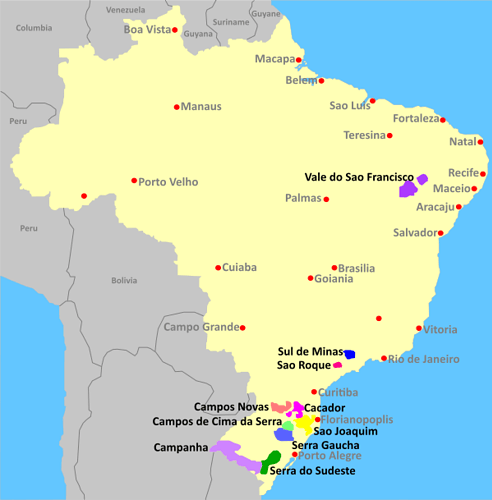 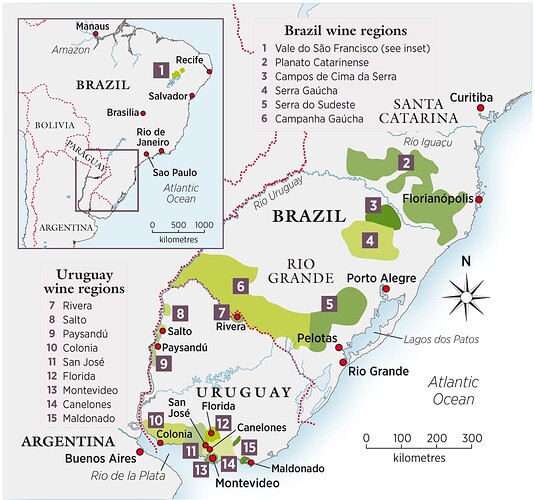 Serra Gaúcha
Over 85% of all wine is produced here. It is now the center for sparkling wine production, however its roots were very much built on the reputation of it’s red wines, much of which has now been replanted to Pinot Noir and Chardonnay.
It lies 29 deg South with average temperatures of 12-22C and moderated by altitudes of between 400-800m. Vale dos Vinhedos (Valley of the vines), has been carved from Balsaltic lava flow and has formed plateaus around the valley.
Most of the vineyards sit on the sloping sides of the valley. This also helps with drainage as Serra Gaucha receives substantial rain increasing humidity in the valley.
The new plantings are mainly Guyot trained Vertical shoot positioning allowing a more open canopy to help air flow through the vines and offset the potential for fungal disease.
There are only 4 certified oenological production areas in Brazil, with all being located in Serra Gaucha and with Vale dos Vinhedos the first to hold a Denomination of Origin (DO) for its wines.
Altes Montes, Monte Belo and Pinto Badeira are all sub regions who have now gained IO status (Indication of Origin). 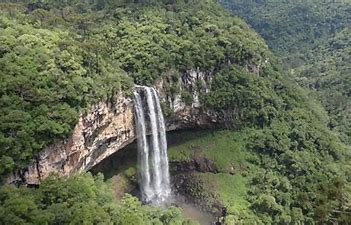 Campos de Cima dos Serras
Seen almost as an extension of Serra Gaucha, vineyards here are at much higher altitudes of between 900-1100M and subsequently temperatures lower, allowing a larger diurnality for slower optimal ripening. The wind is more intense here too which reduces the disease pressure and keeps the air flowing through the vineyards. Here too you will find Chardonnay and Pinot Noir for sparkling wine production, along with Teroldego, Marselan, Muscat and Semillon.

Serra do Sudeste
Heading a little further south and in to rolling hills, the climate here is similar to Serra Gaucha but with differing soils with decomposed granite and limestone as opposed to Basalt.
There is notable lower yields here with Chardonnay, Pinot Noir and Tannat the main varieties grown, however there are also plantings of Touriga Nacional, Alicante Bouchet and Ancellotta (mainly grown in Emilia- Romagna for the production of Lambrusco).
There are few wineries located here but many vineyards with grapes being transported to wineries in other areas of the Rio Grande do Sul for processing.
Average temperatures range btwn 12 - 21C and highest elevations sitting at around 420m .
With less extremes in climate and protection from the undulating hills, Serra do Sudeste is fast becoming an area of great interest for the production of fine wine.

Campanha
Home to some of the oldest vineyards in Brazil, Campanha has gentle hills to the south of Rio Grande do Sul along the border with Uruguay. The land is easier to farm here compared to the valleys within Serra Gaucha . The soils are granite and temperatures vary between 12-24C. Campanha is an area of great development currently with lots of potential.
Vinhas do Campanha are also working to get the area certified.

There are some really exciting and experimental wine production happening here taking advantage of the high altitude plateaus between 900-1400M and making it the highest wine making region in Brazil. Planalto Catarinense also shares the same balsaltic soil origins of Serra Gaucha.
Because of the much cooler climate and higher elevation, the growing season is extended with producers such as Perico producing Brazil’s first ice wine.
(I’ve not tried it).
This area has also seen an abundance of organic and biodynamic wines being produced, whilst passito is a growing trend.

Vale do Sao Francisco
As mentioned previously, this region is very unusual in that it sits so close to the equator. (Optimal growing conditions are between 30-50 degrees North and South).
Vale do Sao Francisco sits at just 9 degrees south. which seems crazy , however, again it is moderated by “some” altitude, albeit only 350M. It is still considered tropical with average temperatures btwn 20-31.7C.
What’s really interesting here, is that the growth cycles of the vines are determined by vineyard management and not the weather. The climate is permanently hot and dry so each vine harvests twice per year within a rolling cycle of 120- 130 days. The vine is then put into hydric stress to discourage it from continuing a growth cycle allowing it a “break” from growth.
This is a big region for the production Muscat and warm climate reds such as Syrah where they tend towards the fruity, full bodied ripe style.
I’m not sure I know of any other regions who manage their production like this. It’s highly unique and unusual. 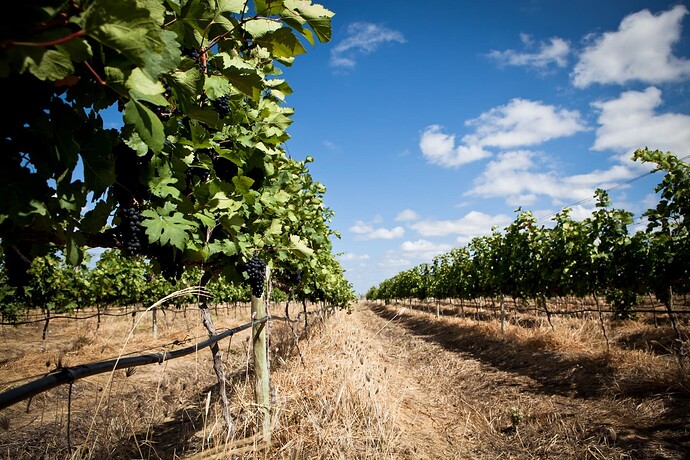 The development of Brazil as a serious contender in wine production has taken hold particularly since the late 90’s when the first class of Bento Gonclaves school of Oenologie graduated. Many of the students came from Italian heritage and already worked on their families vineyards.
As is standard for most Oenology degrees, students travel elsewhere in the world to gain experience of other regions and environments taking back home newly acquired knowledge and skills to practice within their own home vineyards/ wineries.

As a country, but particularly in Serra Gaucha, the largest % of wine produced is sparkling. Both traditional and charmat method.
Producers such as Familia Geisse have firmly put themselves on the map for quality sparkling wine production. (Mario Geisse was initially recruited from Chile to run the Moet et Chandon production, but later planted his own vines in the Serra Gaucha sub region of Pinto Bandeira and the winery has gone from success to succes).
Other noteable producers include Pizzato who have gained a reputation fro their cool climate Merlot, Chardonnay and my favourite their Semillon…(which really reminded me of a Hunter Valley).
Other producers of interest include Miolo, Don Guerino, Guaspari, Campos dos cima to name but a few.
The biggest selection of Brazilian wines available in the Uk come from Go Brazil Wines.

Hope this brief overview has been useful and shout if there are any questions.

Hope this brief overview has been useful and shout if there are any questions.

Thanks for this @Leah, it was a very interesting read. I have had some Brazilian wines while in Rio a few years ago and a Merlot impressed me so much that I sought it out and bought it when back in the UK. It was from Miolo, who you also mention and now I know the region, Campanha.

I thoroughly enjoyed reading your informative post. Learning something new is a rarity here these days so many thanks for taking the time and trouble to share your knowledge.

TWS should send you on an all-expenses paid buying trip !

TWS should send you on an all-expenses paid buying trip !

I’m in total agreement with you 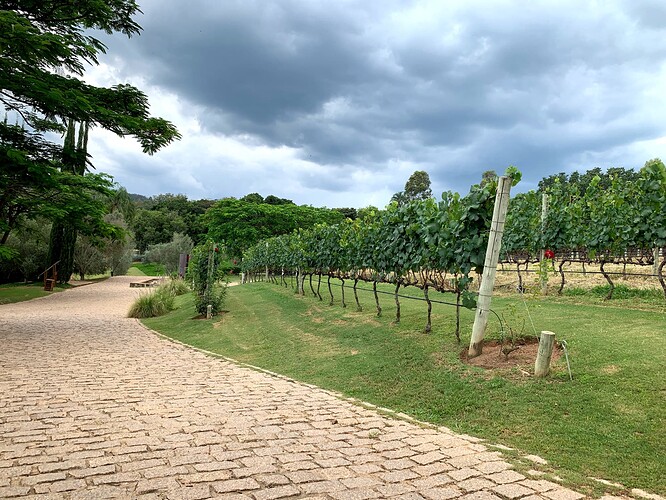 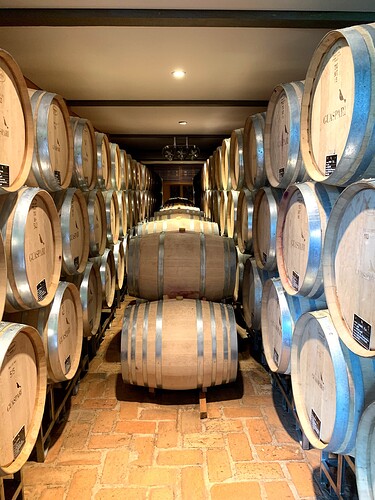 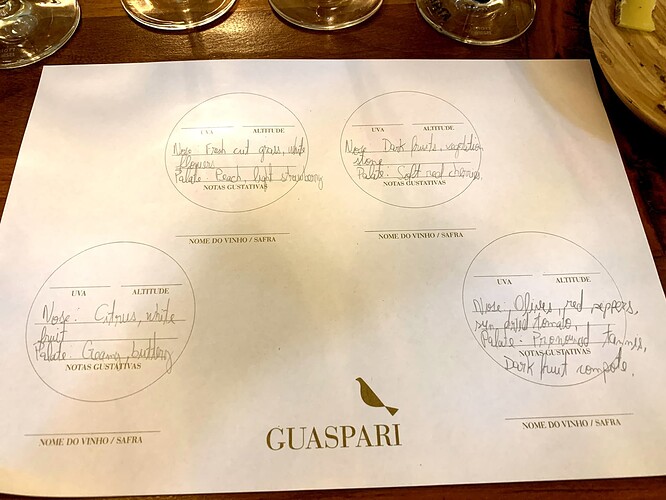 Oh wow! Look at those lovely cobbles. Hope it was a good visit. I’m very jealous

The South American Wine Guide by Amanda Barnes is also worth a look.

Never tried anything I’d really seek to buy again, apart from maybe a couple of Miolo wines that were rustic but interesting, and refreshingly not squeaky clean.

I’m sure there’s plenty of interesting experimentation going on, though in the all-important domestic market it must be a huge struggle to compete with Chile and Argentina on price and Portugal on quality. Brazil is obviously never going to be competitive on the export market.

Thanks for the interesting outline of the sub-regions, Leah!

We had a few take-home messages after our visit to Brazil in 2020, spending most of the wine time in Serra Gaucha as it’s the only region which Leah mentions which is geared up for wine tourism.

Still to this day, the most volume % production in Brazil is hybrids for the (rather disgusting) semi sweet wines still enjoyed by many Brazilians

One of the biggest outfits, Miolo, which has a large winery and visitor centre in Serra Gaucha, sources most of its fruit from extensive vineyards in Campanha where they have more hectarage to play with and get higher potential alcohol ripening (which sounds counterintuitive at first, being further south) but Serra Gaucha has altitude and a very temperate microclimate very similar to Tuscany.

They do indeed make a lot of decent sparkling wines but most are Charmat - method; noble exceptions being the likes of Geisse, and as mentioned in another thread, Valduga. But that is not to disrespect the products; for example Salton - a huge operation in the north of the S-G make a very decent range of Charmat fizzes, and many cuvées are rested sur lie in their tanks for years before bottling. The big Chandon factory / winery only makes Charmat wines.

Finally - the fondest memory we have was taking part in the night harvest at Larentis, on the day it was merlot. We were given aprons and head torches and had to fill a crate each before being rewarded with supper, liberal wine and a sing-song 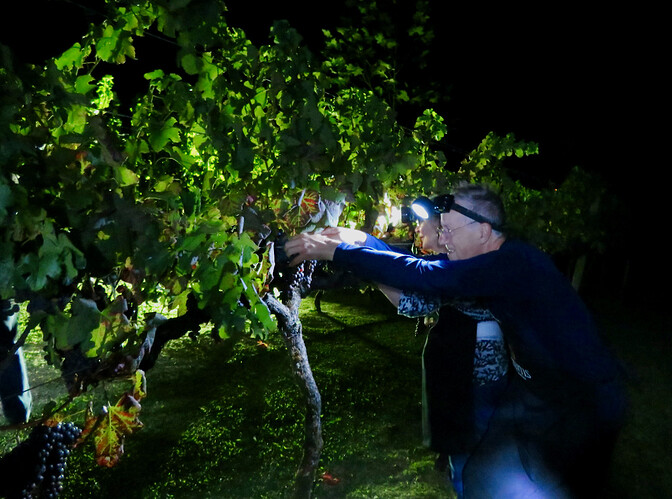 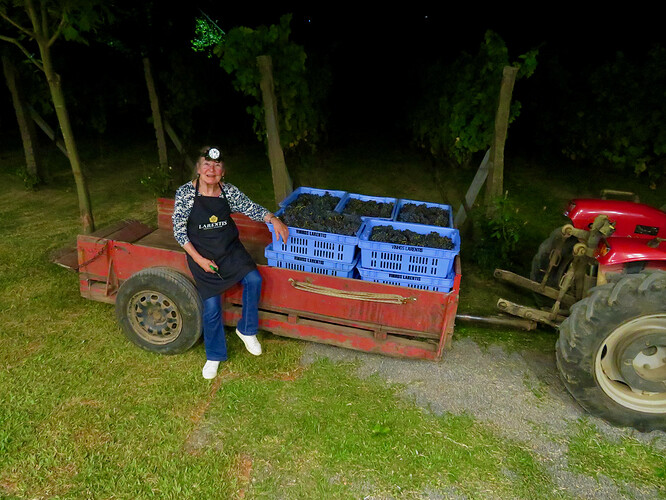 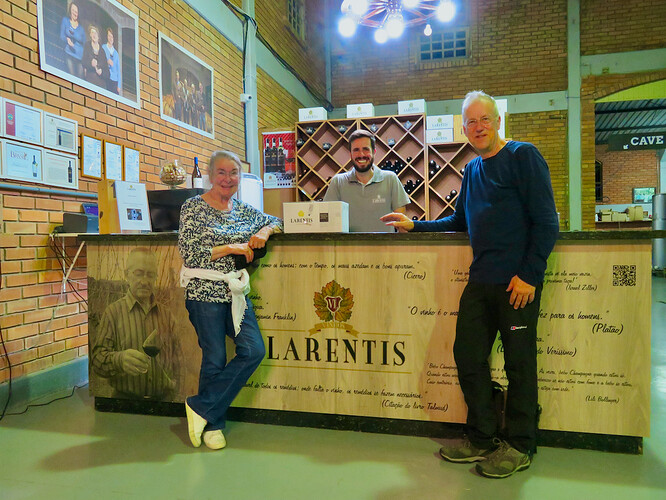 Finally - the fondest memory we have was taking part in the night harvest at Larentis, on the day it was merlot. We were given aprons and head torches and had to fill a crate each before being rewarded with supper, liberal wine and a sing-song