3 things you have learnt from buying from the Society?

You don’t have to have a cellar full of boxes gently maturing to have a special bottle for a special occasion. One of the things I love about TWS is that it stores and matures good wines that it subsequently releases at sensible prices. You can buy those one or two bottles when they are at their peak.

I appreciate this point - I spent too much time pre-TWS putting cases of wines into reserves (mainly BBR, which makes it more complicated to withdraw in part) without realising the Society would make so many single bottles available at/close to their peak. Having this available to us is such a boon.

Many thanks. I’ve tried many things with the 06,including decanting, and yes I’m aware of the ‘closed’ period. From memory, I had one bottle young, when many vintages can be really good, then kept them stashed until about 2-3 years ago, then have tried about 1 a year, and it’s still pretty unyielding for me. However, I see a couple of more promising reviews on CT this year, including one from someone who had experienced my disappointment up til now.

Interesting about the 2010, particularly since many other wines from both Bordeaux and the Rhone are still needing time in that vintage. I will try one soon!

Regarding the 2010, it was unfair to compare it to the powerhouse that is the 09. There’s a lot more subtlety in the 2010, than in the 09. One thing to keep in mind is the % of Cabernet Sauvignon year on year. On very good years, they will use more of it, rather than chuck it into the Moulin bottles. That will give you a hint.

Other neighboring estates in Aniane don’t follow the same pattern though. If you can get your hands on some bottles of Mas Laval, you will see that they follow a Rhone assemblage (Syrah , Grenache , Mourvedre) for the Grand Vin. That works well with the sun-baked climate of that region (unless you are near a river, like Daumas Gassac, where the water body attenuates the effect a bit).

Another one to try is Domaine Grange des Peres. To quote Kermit Lynch, “attaining cult wine status is not an easy feat, and certainly not when the odds are stacked against you. Laurent Vaillé has achieved what others thought impossible. Having spent his early career training under such masters as Jean-François Coche-Dury (Meursault), Gérard Chave (Hermitage), and Eloi Durrbach (Domaine Trévallon, Provence), he settled in the l’Hérault of the Languedoc and purchased his own land in 1989, near Aniane. In this area of the region, where the limestone is hard and abundant and the soil poor, no one thought he would ever have any success planting a vineyard on his plot of choice. Though it took dynamite and bulldozing to clear twice the amount of limestone, boulders, and glacial scree that is found in neighboring vineyards, he found a great terroir for his grapes. He did not have to look far to find ideal bud wood, either. He sourced his Syrah, Marsanne, and Roussane cuttings from Gérard Chave and his Cabernet from Domaine Trévallon. Laurent’s South-facing vines get very low yields, normally from twenty to twenty-five hectoliters per hectare. All are pruned in the gobelet style. The simultaneous restraint and power of his wines makes them ideal for aging. As for the skeptics, they are currently eating their words. His area of the Languedoc has since become known to produce some of the greatest wines in the region, with the new appellation of Terrasses du Larzac, of which he is technically part, reaping attention and praise. In his words, “Nature gave us a partition of land. It is up to us to interpret it.””

I’ve been keeping an eye on the Terrasses du Larzac appellation since tasting a couple of them a year or two back. Impressed by even the more modest ones.

Grange des Peres - I tried it at a tasting a few years back, but it seemed too young still. Price has moved to a level I’m probably unlikely to pay! Unless of course I sell some burgundy that’s gone to silly prices…

Funny how a quick browse through the World Atlas of Wine can yield some underpriced gems. That’s how I came about many of the wines in this appelation. Great book to have around.

now, seeing this 1973 Pauillac, do you think it’s worth it? My wife’s birth year, but the vintage reports don’t look good…

I could couple it with this haut-medoc - our anniversary year - and get above the delivery charge with two bottles.

It’s not worth it though if the wines are no good!

But even though we tend to steer clear of CS-heavy blends, it’s arguably worth a punt providing you don’t hang an entire birthday celebration around it - £57 for 47 years of maturity is amazing value (which was really the reason for flagging it). Maybe a bit costly for a curiosity, but not in the context of some wines on the site, and I can’t think of many places where you’d get a wine nearly half a century old for that price.

Plus the Society guarantee means that if it’s gone to the dogs, you are not out of pocket.

(All of which means: I’m very happy to spend £57 of someone else’s money

I admire the honesty!

I doubt we’d hang the entire birthday celebration on it anyway…can’t do anything for the next month, so it looks like a quiet evening in, with two bored kids coming out of their bedrooms if we’re lucky…

Yes, I didn’t mean to link to it for any other reason than to highlight the ‘agedness’. Forgive me - I’m like a child in a sweetshop

This was posted in another thread by @horsleym and might help…

I was lucky enough to taste through the flight of Pauillac with Tim in Bordeaux this time last year. They offered 12 different vintages (I seem to recall) and this is a selection of the best. The 1973 and 1981 were standouts for me. If anyone here was born in '81 then they need to buy the Imperial and invite us all round (when we’re allowed to, that is…)

Is it worth it? I’ve read elsewhere that these wines were opened, tasted, topped up with wine from the same vintage and recorked this year - so in terms of the provenance risk you would normally expect with a bottle that’s nearly 50 years old, then this is about as much of a guarantee as you could ever expect, backed up additionally by the normal TWS guarantee.

Not sure Tim would offer it to members unless he thought it worth it, particularly after such a recent tasting. I’ve assumed this to be a pretty fragile claret, with minimal fruit and a good dose of tertiary character that’s coming to the end of its days. No fruit bomb, but worth trying for the experience was my conclusion.

But then I bought this and the other 4 vintages for a vertical tasting, so I’m biased…

That’s brilliant, thank you. And as @Martyn says, there’s always the guarantee to fall back on…

just leave the children in the garage…much more effective!

@JamesF, a dangerous game! The garage may or may not be a constant temperature (see earlier in the thread!) and the little darlings could boil or freeze

Mine (the little darlings) are long gone so their core temperature is no longer my concern. Although the one in Chicago keeps asking if he can put fine wine on my credit card and the other one keeps turning up with her empty six bottle wine carrier!

OK, as I sit here waiting to watch Arsenal (probably make a mess of it in the Europa League tonight), another three tips for beginners and those at the start of the journey. These are all in my opinion, to my personal taste and based on years of getting it wrong!

And the Arsenal thing? It’s my son’s fault when he decided that Nottingham Forest were not good enough to follow when he was 9 years old. It’s cost me a ruddy fortune over the years with trips to London and the worst thing? I’m still watching them 10 years after he left home!

That’s good to know. I bought a case of the 2017 Samuel Billaud Chablis 1er Cru Montée de Tonnerre which is sitting patiently for me to open the first bottle.

The wine is less important than the occasion and the company!

I entirely agree! Good wine is lovely, but one can build up expectations, and it can go wrong. Expensive wine can be overpriced, or priced within a totally different market.

I remember being in the Mercado Centrale in Florence (literally the ‘muicipal market’) and having a nice simple meal with my partner. The wine available was either local Red or White. In jugs. It was lovely, fresh, tasty. Or there was the time in Porto I ended up out of the rain (it was unseasonably cold and rainy, and my US colleague was wearing everything she’d brought pretty much) and having a really lovely Vino Verde I think with fantastic sausage. I just loved the way the slight fizz and acidity cut through the meat. It gave the lie to a lot of ideas of food/wine pairing.

This exchange made me go a dig out some of my old cellar record books to remind me of memorable meals with good friends. 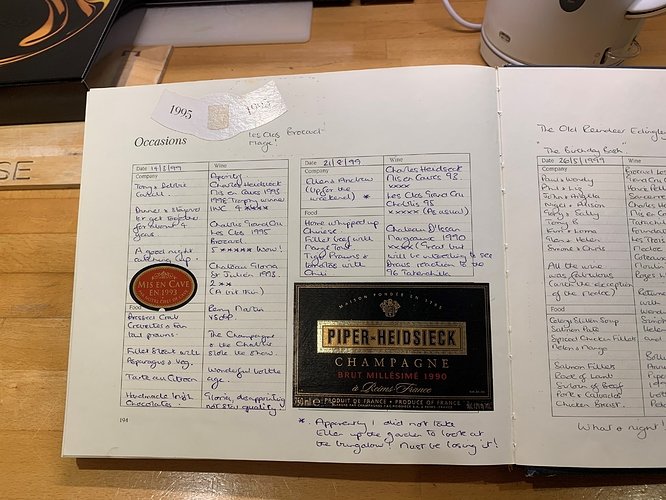 I have to admit that I can’t remember what the business up the garden with someone else’s wife is all about!

And for the App generation, this is how we oldies had to do it before Cellar Tracker! 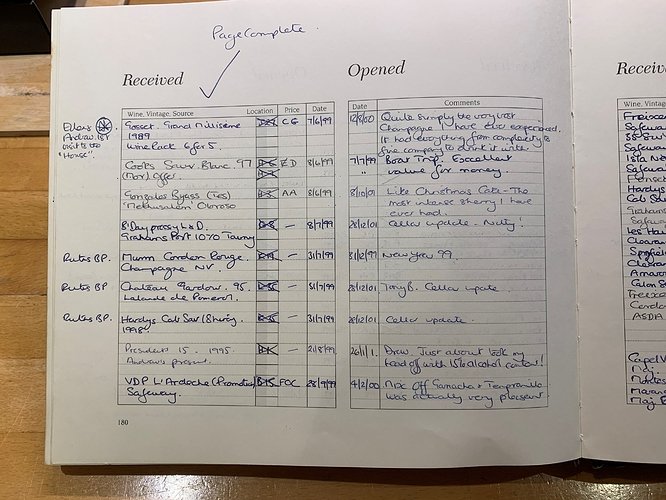 This old timer still does it that way - a Hugh Johnson cellar book by any chance?

Yes it is. Used up three in total before going digital (and found it very hard to find replacements in the end, scouring ebay and Amazon regularly). I still refer to the serving temperature guide in the front from time to time and still re-read Hugh’s advice and guidance on storing and pouring in the introduction in the front of the book occasionally. I have started to enter the family ‘Memorable Meals’ again at the request of my son. He has asked if he can have them when I hang up my corkscrew for that final time! He has also asked if I can leave him any remaining stocks in the cellar. I told him straight that I was planning to toast him with the final glass, out of the final bottle on the final day and that he could go and sort his own collection!

It used to be easy to get labels of the bottles to decorate the pages, but modern glues have pretty much put paid to that. All in all they are a wonderful, tactile thing of beauty that my iPhone or laptop will never be able to replace fully.

One soppy and sentimental old goat signing off (with a slight lump in the throat) for now!

In an ideal world, what would that last glass be?