This was an excellent vintage and I have still have some bottles left to drink. Is there anyone out there who has recently drunk a 2005 Bordeaux and can share their observations? My experience is that the wines at Cru Bourgeois level and above are in general still drinking well as might some of the better so called “petits” chateaux. Indeed I suspect some of the top growths might not be ready but sadly beyond my budget.

It was indeed an excellent vintage, but I have no more 2005 left…

I have some Haut Batailley in halves bought EP through the Society, of which I have half a dozen left. Halves allegedly reach maturity sooner than 75cl bottles, and certainly these are fully ready and currently giving a lot of pleasure!

I have had 2005 Beycheville and Bourgneuf in the last 6months or so. I remember both as being fantastic! Both drinking beautifully now and the former definitely having plenty of years ahead of it.

I have half a case of Beauregard Pomerol - still drinking nicely when last sampled a year ago.

Also had a bottle of Reserve de la Comtesse de Lalande about 3 weeks ago. Thought it was a little tired the first night, but had the rest the following night and it was superb, so it actually needed to open up a bit more.

I only ever had one occasion at a restaurant, we ordered a 2005 Pomerol (I forget which one but it was not Lalande) & it tasted wonderful & tremendously fresh. I sometimes feel traces of that freshness in various more recent Pomerols I have kept on buying since then, but I am guessing the best of 09/10 have not reached their best yet & they are already quite rare.

There are a number of 2005 Bordeaux’s just appeared on the site through the recent ‘low stock’ offer discussed here:

Any deliveries planned this week? Maybe the fine wine bin end list will cause a bit of a buying frenzy… excuse me while I go and tempt myself with it!

Sounds a bit “me” but I have several cases of 2005 in bond, two of the Leovilles, Barton and Las Cases, Grand Puy Lacoste, Duhart Milon,La Conseillante, Giscours, and La Gaffeliere but I am selling these and the only one I have drunk is Dom de Chevalier.
That one is a bit more forward and was very good, as I have broached the case the other ten are with me for drinking.
There is still a decent amount around if you look for it.

I should add that the purchase of these wines and other vintages was not EP, it was after the 2008 crash and when any money invested was earning zilch with low interest rates, so I simply spread it around a bit and wine was a small part of that, deciding from it all what to keep and drink is not easy, by the way any profit is very small so there was little gained from the wine investment.
Oh and I did drink some Cru Bourgeois purchased at the same timeChasse- Spleen was the best of them though whether they are really worth the money compared with what else you can buy at that price is questionable.


At ,£44.50 it’s £8 a bottle cheaper than the lowest price elsewhere. I’ve had a couple of '01s recently which were drinking beautifully, so the '05 should be a point in the next 2-5 years. For current drinking hard to beat the Caronne st Gemme, at a very cheap £19, but reviews are a little mixed.

I had the Durfort-Vivens recently, it was nice but rather unyielding - the Margaux perfume that I crave wasn’t revealing itself yet. Remaining bottles will lie undisturbed for a couple more years at least.

There are plenty of 2009/10s for sale, maybe you are not looking in the right place ?

and the other merchants much the same.

Thanks - indeed a nice list, but most of examples are out of my league (for a ‘number of reasons, all financial’ lol)

… which brings the question I have already (unsuccessfully) tried to verbalise with TWS: why would TWS not offer more 09/10 STE, Pomerol et al. Was told ‘hard to find good ones’, perhaps something to do with their price model / strategy

I’ve drunk through most of my 2005 CB and have fond memories of the Caronne Ste Gemme as well as a generic Margaux from From Vineyards Direct (which was probably Sichel-sourced). But most, I suspect were drunk too young. I have some Girolate left (not tasted yet) and a few of these Courlats from the Claret VCP. To my mind this is now just coming round and has good fruit, integrated tannins and some developing secondaries. My guess would be that the best 2005s will be nowhere near ready yet but I will probably never find out. 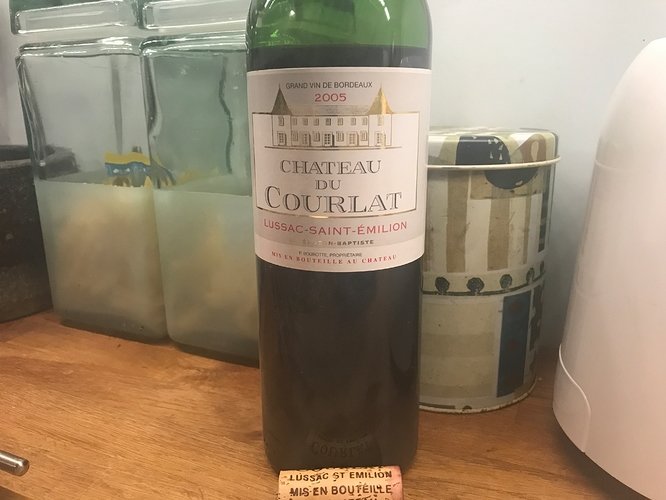 Courlat is gorgeous! I am drinking my last remaining case of it (2009) from reserves. It’s exactly my type of claret: affordable, stylish, with a bite. Should have reserved more of it, but at the time it did not look like a big deal.

This has taken its time but it’s now a lovely wine. I like your description of style on a budget. Knowing how it evolves, I’ll certainly look out for other vintages. That’s the problem though, you take a punt and wait ages to see if it pays off. In the meantime, I’ve missed a number of other years with nothing put by. Ah well, always learning…

try some of auction sites Alexandra. you some times get odd bottles or part cases at good prices
Bidforwine, Dreweatts, Bacchus etc but watch out for their commission charges

Interesting. I’d probably be too nervous though: who knows if that bottle wasn’t stored in sothby cupboard above the radiator for 20 years

Provenance always extremely relevant. But many TWS members sell thru these websites and back story often given. On BFW sellers have a feedback score similar to eBay or Amazon, so you can check on their reputation. And sometimes you can even transfer to your own personal reserves. I’ve just bought a case of Grosset Polish Hill and transferred. So give it a try.