Well, personally I like the free thing and it has given me a bit reading over lunch at my makeshift home office.

Also it’s lovely to receive a personal thank you for the Barolo EP from getting my selection (whoop whoop!) 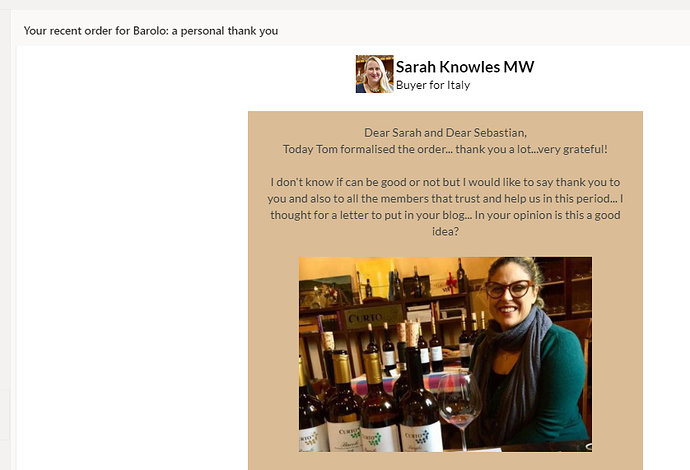 As a win-win-win I’m getting my mystery case a day early!!

Just a quick update - we’ve made some tweaks which should help it load quicker. So those of you who tried it earlier and struggled - can you let me know if it’s still taking ages to load?

Couldn’t get it to load yesterday but tried again today after reading the comments on here and it was quick and easy.

Personally I don’t have a problem with the format and in fact quite enjoyed it. Probably because I’m viewing on a decent sized screen but I found it easy to navigate and I enjoyed the page-flip style, something I have not always got on with in the past. I think the key was that the format suited the content given the balance of graphics and text: easy to flip through quickly to get a general feel and then to track back and read in more detail. I get the point about the sound (particularly the first page turn where my volume was up!) but I played around with muting / turning the volume down a bit and actually decided on a quiet sound as my preferred option over muting.

But to get hung up on the format seems like a big red herring to me. It has some very good content distributed in the only way that makes sense in current times and overall I really enjoyed it. And there are now a few more wines on my wishlist!

I unfortunately i dont get this sent to me. My fault I think . At some time in the past i think i unsubcribed from marketing emails. I have written to members services to ask them to subscribe me again.
I have since manage to get a copy by following the link . I think its very good and those who produce it deserve to be congratulated. I have seen these types of on line magazines before. So i am quite used to the way it operates . I find the page turning effect a bit of fun . Once i have read it properly I will try and give some feed back,
I am not to hard on the critics . There is a lot of tension in the air at the moment because of the lockdown . Though we dont think about there is a fear around about catching the virus and the very real consequences that do result.

I like Nadia’s wines very much, they’re excellent quality, and for the area, very fairly priced but just as importantly I really like her engaging enthusiastic personality. Her videos on YouTube never fail to bring a smile to my face and it doesn’t surprise me that she took the time to offer her thanks to the buyers and the members who bought her wine. It’s great to know she appreciates the custom. In turn, her relatively new business is exactly the kind I’d like to support. Cheers Nadia !

Not that I’ve received an e-mail ( as yet ) so thanks for posting !

Mark me down as happy to be an idiot. Thanks for the innovation, TWS.

Despite all the tweaks & improvements since the thread started - its still rubbish on a Mac. I can download it now but cant rotate/repurpose it.

I had no issues with it on a Mac once I converted it to a PDF.

When first released the interface was a disaster. Just blank white pages after about p4.

On reading this thread tonight I went back in and tried again and it’s now working perfectly. So whatever the techie team did to sort this out, it has worked.

Please bear in mind that - as the society has already pointed out - this was originally intended as a printed document. It may help understand where things fit or don’t fit.

I’m reading between the lines, but I expect that the original slow response was due to the size of the underlying pdf file. pdfs sent to the printers have to be much higher resolution than ones intended for rendering on a screen. But I’m guessing.

Anyway, now that’s addressed, it loads and runs perfectly. Page turns happen immediately. So a suggestion would be that if you are still having delays - and you don’t have a problematic internet connection - then either your computer is too old/slow/overloaded, and it may be time to take that in hand.

Apps.? Already well covered by others. Yesterday’s approach to a problem that’s been solved.

For the record, the reader software initially installed as silent, and I had to switch the sound on to see what the comments about page turn noises were about. So all in all, I like it a lot.

The quotation had been playing on my mind for days. The penny has just dropped - Del Amitri! Hadn’t heard this in years. Loved this song.